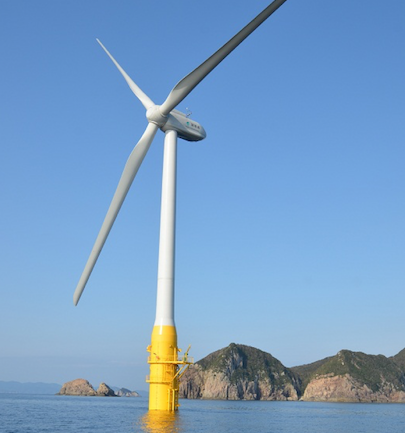 Off the coast of Kagoshima island, a part of Goto City in Nagasaki prefecture, Japan’s first on-gird 2 MW floating offshore wind turbine (FOWT) is about to complete its mission as a demonstration project. Goto City is now planning to take the demonstration FOWT project to the next level by deploying over 500 MW worth of offshore wind power.

Goto City is located in the westernmost Kyushu region, which is the south-westernmost part of Japan’s main islands. The city consists of 11 inhabited islands and 52 uninhabited islands across the East China Sea, with a total population of about 40,000. The city is blessed with natural resources and has an oceanic climate, featuring warm summers and cool winters. 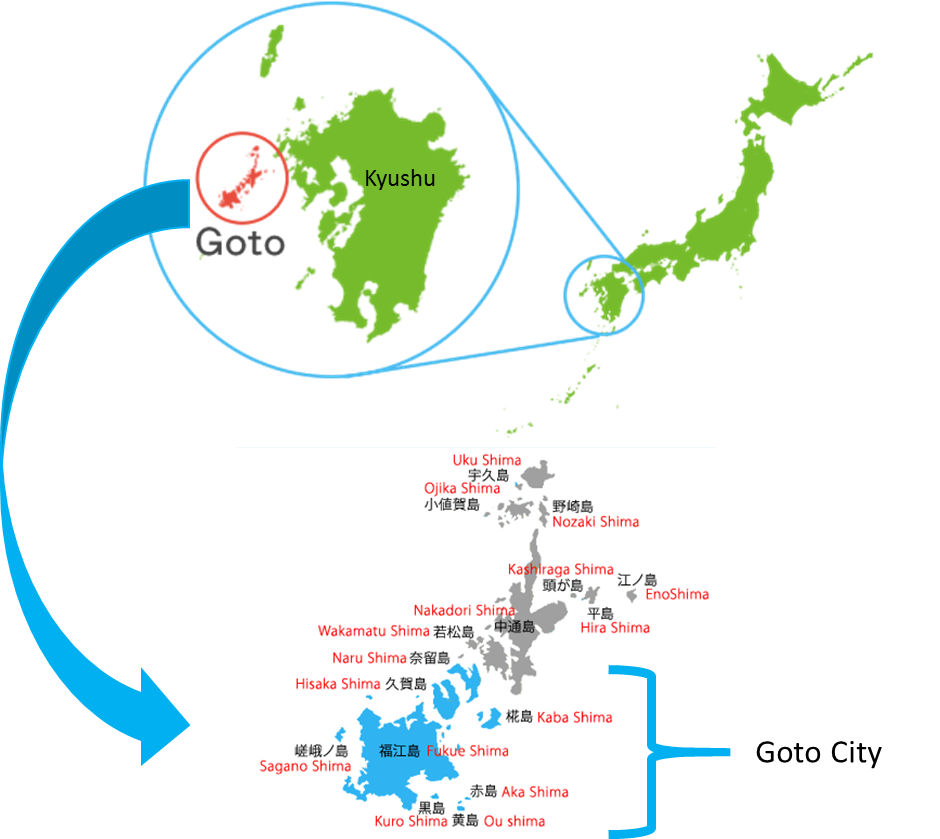 The city has developed an extensive renewable energy plan, with a mission of “Islands of Energy – Energizing the town by producing energy.” By maximizing its natural resources, it is planning to cover 132.4 percent of its total energy needs (oil, gas and electricity) with renewable energy by 2030.

“With the population decline and aging, we fear to become a disappearing community,” Kazuyuki Kitagawa, a spokesperson for the Goto City Renewable Energy Promotion Department, said. “Exceeding our energy self-sufficiency level is not our ultimate goal. It is one of the solutions to stimulate our local economy by creating local employment and industry for years to come. We are aiming at locally producing and exporting renewable energy.”

In 2012, renewable energy provided 4.4 percent of the city’s total energy consumption, producing 97,189 gigajoules (Gj) per year, the equivalent of 27 GWh per year. Of 27 GWh, 88.5 percent was provided mostly by onshore wind power.

“By taking advantage of our remote islands surrounded by large areas of ocean, we will put priorities on developing ocean energy,” Kitagawa said.

The city will accelerate renewable production to 731 GWh by 2030, of which 72 percent will be provided by offshore wind power, followed by 17 percent from tidal power.

Offshore wind energy in the Japanese Exclusive Economic Zone (EEZ), which surrounds Goto City, is considered to be a great potential energy resource located in relatively deep water areas. To utilize the resources and to combat the climate change, the nation’s Ministry of the Environment (MOE) launched the six-year FOWT demonstration project in April 2010.

Because the wind is suitable and the transmission infrastructure was already established, the MOE selected Goto city for the demonstration project. Toda Corporation, a Japanese construction company, led the project development, with a consortium of seven other entities, representing the industry, university, local governments and residents.

First, a 100 kW pilot model was built in 2012, then the nation’s first full-scale (2 MW) floating offshore wind turbine was installed and became operational in October 2013, at 1 kilometer off the coast of Kabashima. Hitachi developed the 2 MW wind turbine with three 80-meter long blades.

“We provide suitable conditions for floating offshore wind power here,” Kitagawa said. “Off the coast of Kabashima, the annual average wind speed is 7.5 meters per second at 60 meters above sea level. The ocean remains pretty stable, with an 89 percent of chance that a significant wave height goes less than 1 meter. This solves the inherent problem of floating offshore wind turbines with unstable platform.” 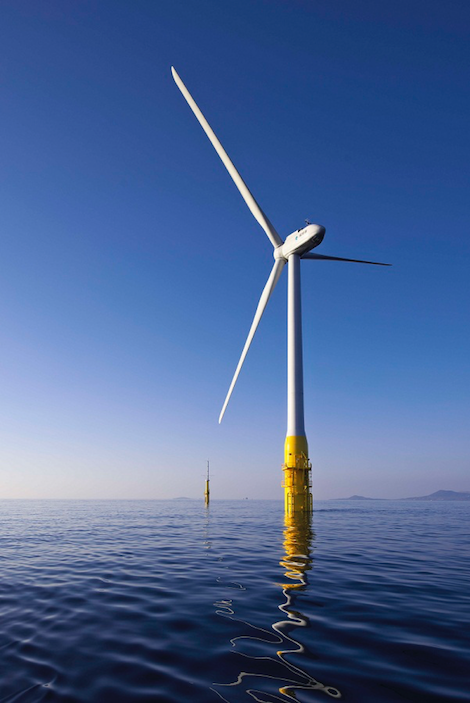 Until 2005, Goto City, with about a dozen of the inhabited islands, did not have interisland transmission systems and depended on fossil fuel-fired plants installed on each island. The main inhabited islands are now connected with the mainland by the nation’s longest undersea transmission cable (53 kW), developed by Kyushu Electric Power Co., the regional investor-owned utility.

Due to the small energy demand on the islands and the limited transmission capacity, the FOWT has been operating only at a capacity of 600 kW. According to Kitagawa, the system should be able to produce 5.78 GWh per year when it operates fully, but last year, it produced just over 1 GWh.

To take full advantage of the scale and create a zero-emission community, this April the MOE launched another demonstration program, which is to produce hydrogen by utilizing excess electricity generated by the FOWT. Toda also leads that project along with 10 other entities.

The company unveiled the nation’s first hydrogen fuel-cell boat off Kabashima. The boat – named Chokichi-maru – is 12.5 meters long and is equipped with a fuel cell and a 450-liter hydrogen bottle. The boat can reach a maximum speed of 37 kilometers per hour.

Hydrogen for the boat is produced by wind power from the FOWT by extracting hydrogen from water, and it is stored in a liquid form called methyl cyclohexane. The manufacturing method produces zero CO2, and the boat also emits zero CO2 when sailing. The excess electricity generated can be stored in a form of hydrogen and transported by the fuel-cell boat to remote islands to be converted into electricity for later use. 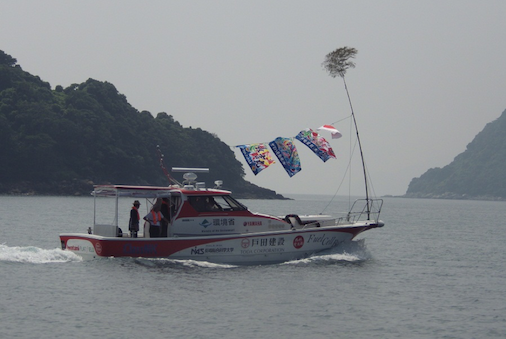 This project will run until March 2016, and it can be applied to fishing boats in the future.

Over 500 MW of Offshore Wind to be Deployed

As the demonstration project is coming to an end by March 2016, the MOE set aside about ¥158 million ($1.3 million) for another project to help local governments to deploy wind projects suitable to their local environment.

The MOE selected four locations, including Goto City. Along with the city, Toda submitted a project plan, which is to deploy 11 2 kW and 100 5 kW FOWT for a total of 552 MW off the coast of Fukueshima (the largest island with a population of over 36,000) and Oushima. Currently the city is talking to local fishermen to decide where to install offshore wind turbines so that any negative effects to the local fishing industry can be minimized.

As all of the projects at Goto City have been funded by the MET, the role of the federal government is critical for rural economic development.

“Rural areas have abundant renewable energy resources, but relatively small energy consumption,” Kitagawa said. “We recognize [the utilization of excess generated electricity from the new wind generation capacity is] a big issue to tackle. We can consider [using excess as] interisland and regional transfer and hydrogen conversion, but the small government like us has a limited capacity, and without the federal government’s support through energy policies, we will not be able to materialize anything.”

Map: Goto City with its islands