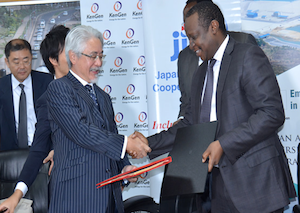 The Kenyan National Treasury on Mar. 16 secured financing from Japan to upgrade the Olkaria 1 geothermal plant in Naivasha, Kenya.

Henry Rotich, Cabinet Secretary for the National Treasury, during a signing ceremony for the financing agreement said that the funding would be used to refurbish the plant, increasing the current capacity of 45 MW to about 50.7 MW, according to a video Rotich shared on Twitter.

“Besides construction of the Olkaria V geothermal plant, the rehabilitation of Olkaria I Units 1, 2 and 3 power plant is part of KenGen’s ambitious green energy development agenda aimed at delivering 721 MW of renewable energy by year 2020,” KenGen GEO Rebecca Miano said in a statement.

According to the National Treasury, Japan has provided Kenya with financial and technical support amounting to about Sh522.5 billion (US$5 billion) since 1964, making Japan one Kenya’s major bilateral partners.

“We are keen on improving the lives of Kenyans through technologies that promote sustainable energy. We laud KenGen’s capabilities in managing development projects,”Toshitsugu Uesawa, Ambassador of Japan to Kenya.#OlkariaIRehabilitation #EnergyForTheNation pic.twitter.com/0OJuunXSfK