Industry Minister Yukio Edano approved Japan’s feed-in tariffs for renewable energy on 18 June 2012. The tariffs are among the highest in the world.

In a related development that may be equally significant politically, long-time renewable energy advocate and anti-nuclear activist Tetsuya Iida announced he is running for governor of Yamaguchi prefecture as an independent candidate.

Some commentators suggest Iida has a good chance at upsetting the nominees of the two traditional parties. This would be a near historic development in Japan.

Iida, head of the Institute for Sustainable Energy Policies, was instrumental in the formation of the Japan Renewable Energy Foundation.

The Foundation is backed by Japan’s wealthiest person, cell phone tycoon Masayoshi Son. With Son’s powerful support the Foundation has been making waves in Japan since the Fukushima nuclear disaster and is largely responsible for the government’s decision to use feed-in tariffs to rapidly develop massive amounts of renewable energy needed to offset the country’s fleet of nuclear reactors.

Should Iida wind the gubernatorial race it could potentially tip the precarious political balance before the next national election, the first post Fukushima.

Iida is campaigning on closing Japan’s reactors and developing renewable energy instead.

Regardless of the outcome of Iida’s campaign, Japan is on track to launch its lucrative feed-in tariff program 1 July. As a result there are almost daily announcements of renewable industry players planning to open operations in Japan or forming joint ventures with existing Japanese companies.

Bloomberg New Energy Finance estimates that the Japanese market in solar PV alone could be worth nearly $10 billion. Bloomberg predicts that Japan will overtake Italy as the world’s second largest market for solar PV. 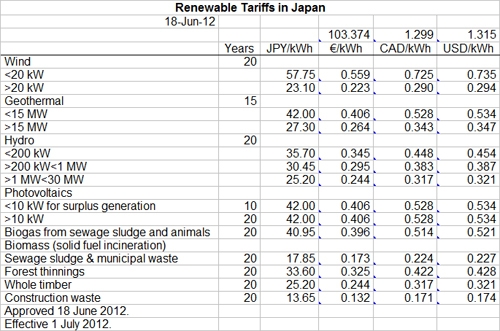