As Italian solar photovoltaic (solar PV) development continues its furious pace, data has emerged that solar out produced the country’s wind turbines in 2011.

This may be the first time that a developed country has generated more electricity with solar PV than with wind energy. Gestore dei Servizi Energetici (GSE) reports that not only did solar PV development grow dramatically in Italy during 2011, as widely reported, but that solar PV generated nearly 10.7 TWh of electricity for slightly more than 3% of internal consumption. Wind turbines, on the other hand, generated only 10.1 TWh for slightly less than 3% of supply.

New renewables together generated 11% of Italian electricity in 2011. With existing hydro, of which Italy has significant capacity, renewables now meet nearly 25% of Italian consumption.

While Italy remains second fiddle to Germany in total installations worldwide, growth of new solar PV installations continued robustly with nearly 2,500 MW installed in the first half of 2012.

While a significant portion of solar PV capacity in Italy is found in large solar plants, nearly one-third of Italy’s total solar PV capacity was installed by homeowners, farmers, and small businesses in 2011. 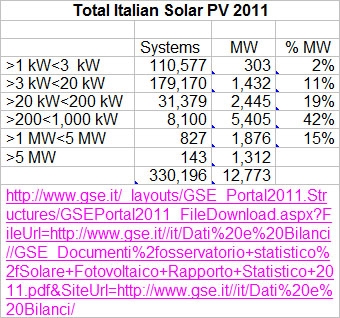 Some 97% of the solar PV systems installed in Italy are less than 200 kW in size. The average size system installed in the 20 kW to 200 kW class is about 80 kW. This is a common size used by farmers and small businesses. 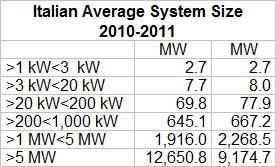 Despite sharing similar Mediterranean climates, and similar size populations, Italy has developed five times more solar energy per capita than California has after a decade of development. 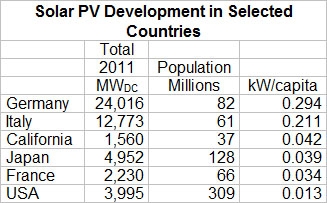 While California gets better press, probably because of its proximity to Hollywood, Italy is doing more with its solar resource than the “Golden State”.