More
Home Baseload Is the US Geothermal Industry Back on Track?

Massachusetts, USA — The U.S. geothermal industry has limped its way through the past few years with little growth, leading many companies to abandon plans and shift their business elsewhere.

While industry activity moved overseas to more promising developing markets like East Africa and Turkey, those that have stayed in the U.S. have been fighting for regulation easements, federal and state incentives and resource assessments — and it looks like all that work is starting to take shape, according to a panel conference call during the Geothermal Energy Association’s (GEA) National Geothermal Summit held in Reno, Nevada.

“The geothermal industry is poised for really strong growth in the years ahead, the question is what happens at the state level,” said GEA executive director Karl Gawell. “We can’t count on Congress any time soon, so we’re relying on states like California and Nevada.”

California has been forwarding a geothermal bill (S.B. 1139) that calls for 500 MW of geothermal procurement by 2024, which is separate from the state renewable portfolio standard (RPS). The panelists were confident that this bill would pass, which would be great news for the Salton Sea Initiative. This plan calls for the development of 1,700 MW of geothermal in the area by 2032, with hopes that it will revitalize the community.

“While the transfer of water is causing Salton Sea to recede, the good thing is that there is plenty of geothermal under [the seabed],” said Carl Stills, energy manager of the Imperial Irrigation District. “We see [the Salton Sea Initiative] as the perfect nexus between water and energy. S.B. 1139 would help that initiative, and it is picking up momentum and nearly becoming policy.”

In Nevada, officials are looking at revamping its RPS since it already surpassed its previous goals of 20 percent by 2020 and 25 percent by 2025 set in 2007, and geothermal players are hoping that it will open its doors to significant development. Nevada also allows companies to purchase renewable energy directly from a utility, which is why Apple moved a portion of its data center operations to the state. The data centers are now powered by geothermal energy and other renewables.

Although critical of congressional inaction, panelists acknowledged several important bills currently on the table, which heavily emphasize permitting. Currently, the National Environmental Protection Agency (NEPA) has a lengthy regulatory process in place for geothermal projects. It can take an average of five to seven years to develop a geothermal project, compared to around 1.5 years for a wind or solar project, and three to five years for oil and gas projects. 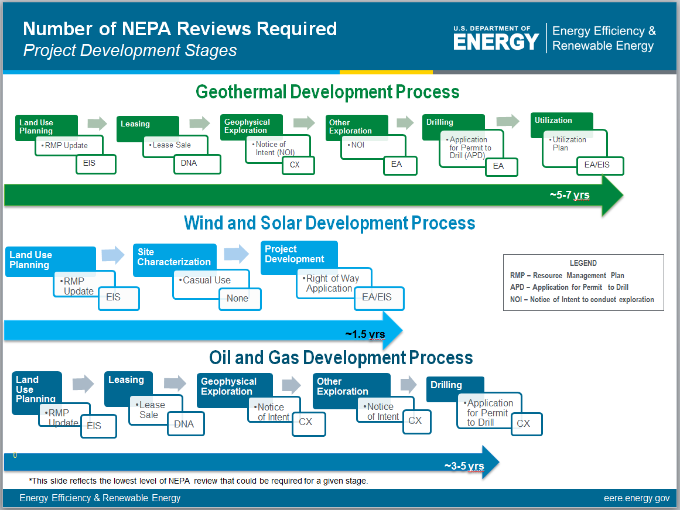 “Geothermal consistently comes up at least levelized cost of energy, but how long does it take to permit a project? Compared to wind and solar, we can’t build projects in a timely fashion and this is hindering forward growth,” said Gawell.

Panelists also pointed to increased grid instability as a positive factor for geothermal growth. As more and more intermittent renewables like wind and solar enter the grid and baseload fossil move off, utilities will be in need to stable, green baseload power, and geothermal fits the bill — it’s cheap, flexible, stable and emission-free, said Gawell.

“Its clear that were going through periods of change in electrical grid with the introduction of more intermittent renewables, geothermal perfectly positioned to take advantage and mitigate changes in electrical grid,” said Bob Sullivan, vice president of business development at Ormat. “Geothermal significantly positively impacts communities, and creates more jobs than any renewable technology out there.”

States, especially California, are starting to hunker down to assess the intermittency problem as more coal plants shut down, and geothermal keeps coming up in the conversation, according to Terry Page, director of regulatory affairs at Enel Green Power North America. This is why companies are starting to look at the U.S. as a possible growth space again.

“Geothermal has all the attributes of coal facility — it can be the backbone of our electrical grid,” said Sullivan. “Geothermal provides a very reliable baseload power to count on day in and day out. Geothermal is very much like a coal facility — but green.”