More
Home Baseload Bioenergy Is the Future of Biofuels in Algae? 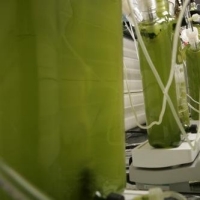 Washington, DC, United States [RenewableEnergyWorld.com] As America tries to wean itself off of fossil fuels, it is turning to renewable sources of energy such as wind, solar, hydroelectric and biomass. The transportation industry relies almost entirely on petroleum, and it accounted for almost 30 percent of all U.S. greenhouse gas (GHG) emissions in 2006. Transportation is the fastest growing source of GHG emissions, according to the U.S. EPA.

Algae has emerged as a promising feedstock for future biofuels due to its high energy content, energy yield per acre, fast growth and ability to grow in water of varying quality.  Algae’s potential, at least in theory, is remarkable.  According to the U.S. Department of Energy (DOE), algae may be able to produce 100 times more oil per acre than soybeans—currently the leading source of U.S. biodiesel—or any other terrestrial oil-producing crop.  Because of its high energy content, oil from algae can be refined into biodiesel, green gasoline, jet fuel or ethanol.  Lastly, algae need only water, sunlight and CO2 to grow.  And, it grows rapidly.

That said, cultivating algae on a commercial scale is no easy task.  The industry is still testing a wide variety of methods for growing algae — open ponds, closed bioreactors or other processes.  Bioreactors have proven to be most effective in producing high quality algae at the fastest pace, but they are expensive, and experts such as John Benemann, who has over 30 years of experience in microalgae biofuels, question whether they are economically feasible for commercial scale production (See John Benemann, “Opportunities and Challenges in Algae Biofuels Production,” Sept. 2008).  Open ponds, which Benemann says account for 98 percent of commercial algae biomass production as of 2008 (including algae grown for nutritional products), are significantly cheaper, but are susceptible to contamination by native algae species, evaporation, and usually produce lower energy density algal oil.

Sapphire Energy, a leading California-based Algal biofuel company that has raised over $100 million in capital, is investing in developing open pond methods.  The company plans to produce “green crude” oil that can be refined into fuels that are chemically indistinguishable from petroleum-based jet fuel, gasoline and diesel, and therefore, will require no special distribution infrastructure or engine modifications.  In a recent press release, the company reports that it will be producing 1 million gallons per year of diesel and jet fuel by 2011, and 1 billion gallons per year by 2025—equal to 3 percent of the RFS mandate.

Solazyme, another of the better-financed algae biofuel companies, claims to be on track to become economically competitive in 24 to 36 months, according to this report. They have a unique closed pond technology where sugar is used as algae feed.  A recent study, using Argonne National Lab’s GREET model, concluded that the “full lifecycle greenhouse gas (GHG) emissions from field-to-wheels for Solazyme’s algal biofuel, Soladiesel, are 85 to 93 percent lower than standard petroleum based ultra-low sulfur diesel,” according to an April 29 Solazyme press release.

More recently, Origin Oil announced it has developed a new process to extract oil from algae in a single-step.  A time-lapse video, available on the company website, shows the oil rising to the water’s surface as the algae falls.  “Origin Oil plans to rapidly commercialize the patent-pending process for use by others in the fast-growing algae industry” the company said in a press release.

Despite industry optimism, many challenges remain.  It is unclear if current lab experiments and pilot programs can be scaled up.  Other technical challenges exist, according to a recent fact sheet from the Defense Advanced Research Projects Agency (DARPA), including: identifying oil-rich algae varieties; identifying processes for the economic extraction of oils from algae and identifying commercially viable “co-products.”  The cost of producing algae-based fuels remains exorbitant.  Beyond the technical challenges, issues such as land- and water-use will need to be addressed going forward if algae is going to make a sizable contribution to the liquid fuels market.

Many in the industry admit algae cultivation simply for biofuels may not be profitable by itself.  Biodiesel Magazine reports that the industry is beginning to take advantage of markets for additional high-value co-products such as nutraceuticals, fertilizers and the biomass waste product as a cellulosic ethanol feedstock.

Overcoming today’s obstacles means investing in research and development.  The federal government is also looking into algae as a potential source of fuel — again.  The National Renewable Energy Laboratories (NREL) has restarted its algae research program that was abandoned in 1996 after nearly thirty years in existence.  NREL has partnered with Chevron to develop algae strains that can be economically harvested and processed into transportation fuels.  DARPA is also looking into the use of algae as an alternative source for jet fuel.

The military and airlines are increasingly interested in algae because it can produce “drop-in” jet fuel that meets the specific requirements of aviation that ethanol cannot. Both are searching for a reliable, non-petroleum-based, climate-friendly fuel. In fact, algae has already been used in test flights conducted by a number of international airlines including Continental. Their research and development efforts could be instrumental in overcoming the challenges to commercial production.  Testifying before the House Committee on Science and Technology, Billy Glover of The Boeing Company predicted renewable jet fuels would be commercialized around 2015 with Jatropha, Camelina and halophytes as the primary feedstocks in the near term and algae in the long term.

Jamie Donovan is an intern and Ned Stowe is a policy associate with the Sustainable Biomass and Energy Program at the Environmental and Energy Study Institute.

This article originally appeared in the Environmental and Energy Study Institute (EESI) newsletter and was reprinted with permission.