With capital flowing rapidly into renewable energy it’s hard to find a serious threat to the sector’s growth.

One threat is scaled imagination, not just from natural gas fracking or “clean coal” but from nuclear power.

Microsoft co-founder Bill Gates, for instance, calls renewables merely “cute” and has put his money into Terrapower, a “traveling wave” nuclear reactor that claims to deliver less waste than other designs.

Amazon.com founder Jeff Bezos, meanwhile, has put $19.5 million into General Fusion, a Canadian company which, as the name implies, is working on a fusion reactor that would run on hydrogen.

A proof-of-concept reactor is already being built in British Columbia using Magnetic Target Fusion, a technique combining magnetic fields and plasma that first breaks down lithium into helium and tritium, which is then combined with deuterium to produce energy and harmless gases.

The most audacious plan is from former astronaut and Senator Harrison Schmitt. He wants $15 billion to return to the Moon and mine its Helium-3, which could simplify the fusion energy process. A third of the money would go into new heavy-lift vehicles, a third to a demonstration plant, and the remaining third to a Moon base and operating costs.

What’s wrong with all this? Nothing, in theory, except for two things: 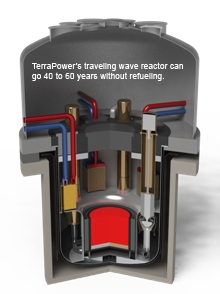 Gates, for instance, insisted in a talk at the Wired Business Conference that, while renewables may work in the developed world they can’t meet the growing needs of China and India.

You mean the Sun doesn’t shine there? They don’t have tides, or wind? They’re not sitting on the same molten rock the Americas sit on? Who knew?

I’ll grant him one point.

Governments shouldn’t be investing in deploying what we know works, but in research that will lead to breakthroughs 10 or 20 years down the road.

But there are other dreams we can dream, using the abundance all around us, rather than digging up the Moon or mining Bolivian lithium for our grandchildren’s energy.

Meanwhile, let the private sector scale solar and wind and geothermal solutions. We’ll see if we still have an “energy shortage” in 20 years.

Then, if Bill and I are still sucking oxygen, we can argue these things out some more.