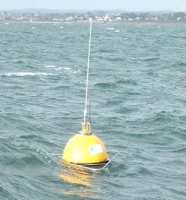 Galway, Ireland [RenewableEnergyAccess.com] An initiative to open a wave energy test site one and a half miles off the coast of Spiddal, County Galway, is under way with the arrival of the first wave energy generator, Wavebob, which has arrived at Galway Docks. Made possible by the Marine Institute and Sustainable Energy Ireland, the 37-hectare Galway Bay test site will be open for engineers to field-test other prototype ocean-energy generators as well, all in the interest of harnessing the power of the Atlantic Ocean.

“The most energetic waves in the world are located off the West coast of Ireland,” said Peter Heffernan, Marine Institute, CEO. “The technology to harness the power of the ocean is only just emerging and Ireland has the chance to become a market leader in this sector.” Wavebob will test a quarter-scale prototype, which is hoped to provide the most accurate evidence to date for the cost and performance potential for the device. Wavebob has already gone through a rigorous path of theoretical modeling followed by small-scale prototype testing in wave tanks. Some of this testing has been performed at the Hydraulics and Maritime Research Center, University College Cork. Both agencies have been working closely to develop a research and development strategy for ocean energy technology in Ireland. This strategy will define a phased approach toward product development complemented by an outline of the investment levels required to sustain the development of an ocean energy industry in Ireland. The Marine Institute and Sustainable Energy Ireland (SEI) have invested Euro 300,000 [USD$365,000] in university-based research and a further Euro 850,000 [>USD$1 million] in industry-based research of ocean energy technology. It is expected that the implementation of the Ocean Energy Development Strategy will see a progressive increase in the range and scale of research and innovation investment. In 2004, Teresa Pontes of Portugal, an ocean energy expert who spoke at an EurOcean marine science event in Galway, said that up to 20 million homes in Europe could be powered by clean, renewable energy from the sea. She estimated that by harnessing energy from waves and ocean currents, Europe could produce around 200 terawatt (200 million megawatt) hours per year of electrical power. The Marine Institute, which hosted the event during Ireland’s EU presidency, is mandated to spearhead all aspects of marine R&D leading to the sustainable development of Ireland’s 220 million acres of underwater territory and has also drafted a comprehensive marine research and development strategy for the next seven years.