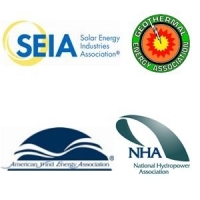 Washington, DC, United States [RenewableEnergyWorld.com] In a joint conference call on Thursday, the leaders of four renewable energy industry associations — Randall Swisher from the American Wind Energy Association (AWEA), Karl Gawell of the Geothermal Energy Association (GEA), Linda Church Ciocci of the National Hydropower Association and Rhone Resch of the Solar Energy Industries Association (SEIA) — put forth 5 key proposals that they believe are essential elements in helping bring the U.S. out of these dark economically-challenged times and into a bright, clean future.

First, renewable energy industry leaders called for an adjustment to the recently passed renewable energy tax credits. The industry would like to see the Investment Tax Credit (ITC) amended so as to improve its transferability and to make it refundable.

Some of the larger investors in renewable energy development, wind projects in particular, were major banks such as Lehman Brothers, AIG and Wachovia. With those financial institutions out of the picture and so many others without a tax appetite, the way that the current investment tax credits are structured just isn’t letting them work as well as they could be, explained Swisher.

“Tax-equity markets are down, but they are not out,” said Karl Gawell (pictured below). But they need to work in the financial environment that exists today.

Gawell, Ciocci and Swisher all indicated that geothermal, hydro and wind developers are ready to go now with major projects that have been put on hold due to the recent downturn of the financial markets. If the ITC was amended, the results would be immediate, they said.

“We have production lines already mapped out,” said Gawell.

In addition to having the tax credits refundable and more transferable, the industry would like them extended for 5 years.

Another key policy that the joint associations would like to see immediately put in place is the adoption of a federal renewable portfolio standard (RPS) that would require 10% of electricity to come from renewables by 2012 and 25% by 2025. Measures such as these have already been set forth in Obama’s energy plan. The industry associations urge the 111th Congress to adopt a federal RPS as soon as possible.

Stable federal policy is the signal that market developers need, said Swisher (left). This would replicate the effectiveness of an RPS that is already being seen in states.

Another point that all associations agreed was of utmost importance to bring the U.S. out of its economic woes was major investment in interstate electrical grid infrastructure, including new transmission and smart grid technologies. Many of the best renewable energy resources are located in remote areas that do not have ready grid-access. New transmission corridors will be necessary to bring wind, water, solar, and geothermal energy that is harvested in remote areas to areas of the country in which people reside.

There are billions of investment dollars waiting to be poured into these new technologies, said Gawell, new transmission is “the critical last step necessary to get this investment flowing.”

Rhone Resch outlined the fourth critical point that the industry associations are calling for: a federal mandate that all government-owned entities be powered, at least in part, by renewable energy. When Nellis Air Force base installed its 14-megawatt solar energy system, it saved the base more than US $1 million per year, he explained. Renewable energy systems lock-in long-term electric rates that save the taxpayers money.

“The government can lower costs, while increasing jobs,” Resch (below, right) said.

On the topic of jobs, one of the greatest things about solar energy, explained Resch, is that you don’t drill for it, “you manufacture it.” Increasing our use of renewable energy as a country, he said, will unleash millions of new manufacturing jobs. He said the solar energy manufacturing industry grew an incredible 74% in 2007. The solar industry as a whole currently included 3,400 companies right now, a number that is expected to increase dramatically should the federal government take immediate action on these proposals.

“Solar has become an economic engine for America,” he said. But for this growth to continue, firm commitment from the government is critical.

Wind energy has also been a critical economic driver for the country, said Swisher. In the past 18 months, 50 factories were opened or announced in the U.S., he said. The potential for wind over long-term is huge and could lead to the development of 500,000 jobs.

Invest US $30 Billion in Renewables

The last proposal that the industry associations are making to the new administration is to front-load its stated goal of investing US $150 billion in clean tech over the next ten years by investing US $30 billion in new project development and installations of renewable energy in the U.S. in 2009.

Linda Church Ciocci (left) explained that the US $30 billion is necessary because renewable energy technologies still need targeted assistance to “kick start” new projects across the country. The money would be invested in deployed projects, the electrical transmission grid and would include investment in the nascent water power companies that are just getting started.

“However, the new Administration and Congress need to take action to ensure that the renewable industries’ growth continues, given the current economic realities.”

To listen to sound bytes from the press conference, play the video below.