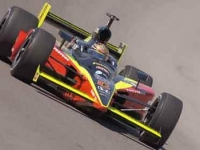 Indy-style racing has used methanol with impressive results since the late 1960’s. But with all 17 races on the 2007 IndyCar Series schedule (including the Indianapolis 500) run on 100 percent renewable fuel, many people are wondering how exactly the ethanol holds up at speeds in excess of 220 mph. “The IndyCar Series jump to ethanol has been great,” said Tony Kanaan, the series’ 2004 champion. “We are definitely on the right path with ethanol. There is more power with the new (3.5-liter Honda Indy V-8) engine. It runs clean and it is better for the environment. So it is a win-win situation, and that is great for the series… If we can show that the IndyCar Series cars can run ethanol, then it is good for everyone’s street cars.” The American-made ethanol fuel is provided by Renova Energy in Torrington, Wyoming, one of the more than 110 ethanol plants in production. In 2006, these facilities produced nearly 5.4 billion gallons of ethanol — enough to enrich 46 percent of all gasoline sold in the U.S. Currently, there are more than 75 ethanol plants under construction across the country. Ethanol in high-performance vehicles has been one of the renewable fuel’s most attractive qualities and best-kept secrets. With racing machines that reach speeds in excess of 230 mph on 100% fuel-grade ethanol, the IndyCar Series is the ultimate challenge for ethanol as a performance fuel, illustrating a higher octane rating (113 to methanol’s 107), a high flash point (55.4 to 52 degrees F) and a larger energy content (77,000 BTU per gallon to 64,250 BTU per gallon). The series held its first Open Test of the season at Daytona International Speedway on January 31 and February 1, 2007, where for the first time all IndyCar Series cars were run on the 100 percent fuel-grade ethanol. “After being the Team Ethanol driver for almost a year, I’ve seen corn turned to ethanol first hand from driving a combine in the field, to visiting ethanol plants, to using it in my own car,” said Jeff Simmons, driver of the #17 Team Ethanol Dallara/Honda/Firestone for Rahal Letterman Racing. “Each day I’m more impressed with its high-performance attributes, and I look forward to Homestead, where I can really showcase ethanol’s power.” As part of the Ethanol Promotion and Information Council’s (EPIC) first-ever national marketing campaign around its partnership with the IndyCar Series, the council has created a mobile marketing unit that will be parked in each track’s midway area at all domestic IndyCar Series events in 2007. “The partnership between the IndyCar Series and the ethanol industry exemplifies the spirit of energy independence, American ingenuity and innovation,” said Tom Slunecka, executive director of the Ethanol Promotion and Information Council (EPIC), earlier this year. The IndyCar Series opens its ethanol-powered season on March 24 under the lights at the XM Satellite Radio Indy 300 on the Homestead-Miami Speedway in Florida.