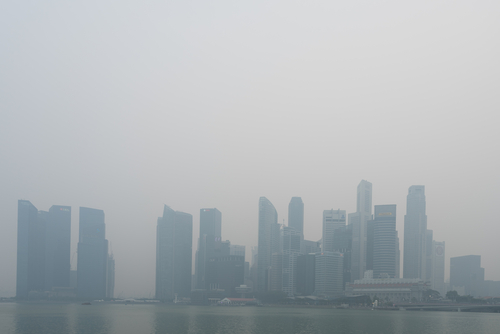 Indonesia’s financial regulator will introduce rules to restrict banks’ lending to environmentally damaging projects by 2018, which may eventually help the nation curb the forest fires that choke parts of Southeast Asia with thick haze for months each year.

The Financial Services Authority, known locally as OJK, is aiming to draft regulations by next year to target agriculture, energy, fishery and microfinance companies, Edi Setijawan, the regulator’s deputy director for banking architecture, said by phone on Nov. 23. The rules would build on guidelines for sustainable financing in the palm oil industry that the nation’s eight largest banks will test starting in January, he said.

While not specifically directed at the forest fires, policing the environmental impact of projects and activities of companies that borrow funds from its banks will help Indonesia curb the burning that this year covered an area four times the size of Bali island. Lit to clear land for plantations, the fires caused a smoky haze that spread as far as southern Thailand and the Philippines, and turned Indonesia into the world’s worst greenhouse gas polluter.

“We can’t ban banks from lending to any non-sustainable projects as the economy would grind to a halt, but that’s something we’re moving towards,” Setijawan said. “Later on, banking can also be used to prevent what happened a few months ago, the terrible haze.”

The regulator in the next two to three years may ask banks to invest in companies and projects deemed sustainable, to offset any funds given to non-environmentally friendly activities, he said.

The eight largest Indonesian banks, including PT Bank Central Asia and PT Bank Mandiri, will work with the World Wildlife Fund (WWF) in integrating sustainable financing criteria for the palm oil industry in a pilot project from January, the Swiss-based WWF said earlier on Nov. 23 in an e-mailed release.

The 18-month project aims to help Indonesian banks take into account environmental, social and governance issues when they make lending decisions, according to the WWF. Participating banks will also look to direct more funding to businesses that implement sustainable practices, the organization said.

Only four major banks in Indonesia, Malaysia and Singapore have embedded environmental factors as part of their credit-decision process, the WWF said in a May report. The Association of Banks in Singapore on Oct. 8 introduced guidelines on responsible financing targeting sectors, including agriculture, energy, forestry and minerals and said its 158 members will start the implementation in 2017.