More
Home Baseload Hydropower In Pursuit of Port Infrastructure: Can Coastal States Keep Pace with US... 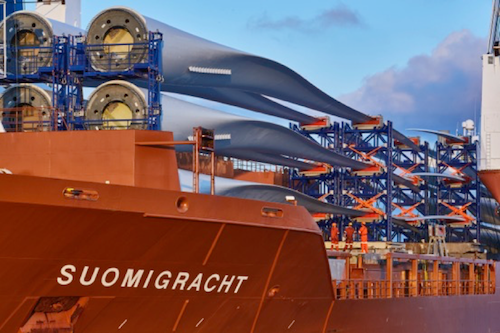 The Massachusetts Clean Energy Center (MassCEC) for one is pioneering offshore port infrastructure.

“Beyond rapid deployment, good port infrastructure amounts to cost-effective development,” MassCEC’s CEO Steve Pike told Renewable Energy World. Describing a recent meeting with DONG Energy’s general U.S. manager and co-CEO of Copenhagen Offshore Partners, Pike said “they both identified infrastructure as being a key to managing project costs and timelines. Laying the groundwork now, as we are, will almost certainly lead to less expensive and more expeditious deployment of projects.”

Fullenkamp also highlighted the potential for OEM manufacturing facilities to gravitate towards ports — a tendency evidenced in Europe. Though not an absolute necessity, significant advantages stem from the portside manufacturing.

Clearly there is much at stake for the industry, but cities stand to gain immensely too. As evidenced in Europe, ports servicing the offshore sector amount to wellsprings of job creation and investment.

Manufacturing components for a 500-MW offshore wind park alone “would create 1,500 direct manufacturing jobs, many of which would be highly paid trade workers,” Fullenkamp said.

What remains to be seen is precisely where investment will be made. Pitched for greatest growth towards 2030, the U.S. East Coast is already taking port development seriously.

In Massachusetts, state legislation supporting procurement of 1.6 GW offshore capacity between now and 2027 has catalyzed new infrastructure and proactive endeavors.

“The terminal is a purpose built offshore wind deployment port, developed in consultation with the offshore wind industry not only for today, but designed with future needs in mind,” White said. “The terminal has a navigational channel dredged to -30 feet MLLW and a new quayside engineered to sustain mobile cranes and storage loads (4100 lb/sq. foot/20 metric ton/sq.m), making it among the highest capacity ports on the East Coast.”

Ever-larger wind turbines incur consequences for staging areas — something that cannot be ignored by port planners. As White said: “We’re cognizant of technology advancing at a rapid pace and the need to plan infrastructure accordingly.”

Massachusetts has secured commitments from three major offshore developers — DONG Energy, Deepwater Wind and Vineyard Wind — to adopt the terminal. “The agreement commits the developers to utilize the terminal, if and when they secure a power contract, for primary staging and deployment,” White said.

MassCEC has also commissioned the Massachusetts Offshore Wind Ports & Infrastructure Assessment to assess state capabilities. White said that “the intention is to deliver a road map to the offshore wind industry to inform their investment decisions going forward.”

Most recently in Maryland, developers Deepwater Wind and U.S. Wind have agreed to invest a total of $115 million into port infrastructure and manufacturing around Sparrows Point in Baltimore County. The investments reflect conditions set by the Public Service Commission in order for the developers to access wind subsidies for their respective offshore projects planned for off the coast of Ocean City, Md.

“A bond referendum, approved in November 2016, to improve the state’s existing ports infrastructure will enable the state to be an attractive destination for port usage for the offshore wind projects (adjacent to Massachusetts and Rhode Island state waters) being planned for the 2020s,” Beadle said.

Steven King, managing director of the Quonset Development Corporation (a port that serviced Block Island), told Renewable Energy World: “[the bond] builds on the state’s maritime success by supporting a $70 million investment in two key Rhode Island ports [Davisville and Port Providence]. The investments in port infrastructure will lead to the creation of hundreds of new jobs at both ports and millions in tax revenue for Rhode Island.”

While White describes Massachusetts’ endeavors as an “economic play,” he is cautious of suggesting rivalry is afoot.

“There will be competition for economic benefits — returning investments to ports after loss of conventional industries is a very attractive prospect,” he said. “But that’s to the benefit of the wind industry. At the same time, we’re also working together with other states on a host of issues.”

Expanding on this, Pike described a DOE-funded study underway between Massachusetts, Maine, Rhode Island, and New York: “The study is considering ways to collaborate on supply chain management, including aspects relating to port infrastructure.”

Going forward, Pike believes inter-state cooperation such as this will play an important role.

“As the industry grows, a port here or a port there isn’t going to be sufficient to service all deployment and O&M needs,” Pike said. “Some years from now, it’s going to require a regional solution with multiple ports.”

In development of offshore wind port infrastructure, the opportunities of capitalizing on European wind acumen to accelerate the U.S. offshore wind sector are clear.

Iván Pineda, director of public affairs for the trade organization WindEurope, told Renewable Energy World: “The U.S. is about to kick off a serious industry with offshore wind. A key element for U.S. ports to realize is that they need to grow alongside the wind industry in consideration of its vision and pipeline.” 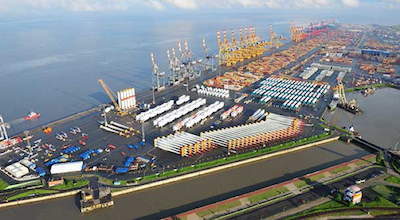 “Collaboration from the beginning makes most sense for everyone — helping to optimize investments, provide cost reduction pathways, and prepare ports for the growth,” Pineda said. “With a strategy there’s a trickle-down effect through the industry from developers to O&M and supply chain players that can plan port activities accordingly. We’re talking about planning and building for the future, not adapting to growth.”

Pineda contrasts this approach with European growth as the offshore wind sector took off: “Ports had to adapt to what the industry asked for, and were often a final consideration for developers after new projects arose.”

Interestingly, Pineda added that ports that might not appear the best location, or favored on account of their proximity to projects, might still attract investment “if they are creative in offering attractive services.”

“A good way of attracting industry is demonstrating internal port procedures and vessel management,” he said. “What happens in good weather windows for offshore construction? Are ports giving priority to offshore wind vessels? These things matter in efficiency of execution. Dealing with port traffic management is as important as infrastructure.”

Of interest to U.S. actors, WindEurope is establishing the Offshore Wind Ports Platform.

“It will provide European ports a forum for exchange of best practices and insight on project pipelines, and facilitating contact with offshore wind industry players,” Pineda said. “Naturally, we’d welcome international players to the platform.”

All considered, while it is early days for the U.S. offshore wind industry, the time has never been better for planning out its vital foundations.