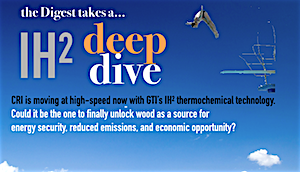 This week, a cryptic but tasty news kernel has emerged from CRI, that they have entered into a Front End Loading (FEL-2) evaluation package license agreement for IH2 technology, a continuous thermal catalytic process which produces liquid hydrocarbon transportation fuels from forest residues, and other renewable resources. The licensee is described as a “Fortune 2000 global company headquartered in Northern Europe,” but nothing more has been officially forthcoming.

It was just last March that an earlier cryptic but tasty news kernel emerged from CRI that “a leading global forest products company has entered into an FEL-1 license agreement” for the technology.

Put that together with two demonstration-scale projects underway — and it is starting to look like IH2’s technology is heading for scale.

What is the IH2 technology, anyway?

The IH2 technology is a thermocatalytic conversion route for woody biomass and forest residues feedstock that has been estimated to produce drop-in renewable fuels at around ~$2.25/gallon (in 2014 dollars), based on a 2000 tonne dry feed/day scale on a USGC basis using a stand-alone design basis. The technology was initially developed by the Gas Technology Institute and CRI came in, initially for the catalyst sales opportunity, but expanded its role after digging into the technology.

And what exactly is a FEL?

The Construction Industry Institute defines it as “the process of developing sufficient strategic information for owners to address risk and decide to commit resources to maximize the chance of a successful project.” This process generally encompasses three sub-phases: feasibility, concept, and detailed scope. In short, it’s a first step major companies take on major projects to ensure they’re not getting in over their heads.

Why significant in this case? The good news is that the IH2 technology has passed the first gate. In the next phase.

What does the IH2 technology produce?

Commercial volumes of ASTM-spec renewable gasoline, jet and diesel. In the 2000 ton per day reference example, think something like a 60 million gallon nameplate capacity, based on 90 percent uptime.

However, by late 2014, the company had modified this to a 67-172 gallon range. The gasoline: diesel ratio would be expected to be 70:30. Product oxygen is below detectable limits and the total acid number or TAN is less than 0.03. By contrast, traditional pyrolysis oils have a TAN in excess of 100.

So, think in terms right now of a 28 percent yield with wood as the feedstock and with the current generation of catalysts. With each new generation, yield is expected to increase. Also, the boiling point curve can be moved, which allows one to shift the ratio of the product one produces, e.g., more gasoline or more diesel.

The process delivers not only renewable hydrocarbons, but also renewable CO2, high-pressure steam/power, char (which can be combusted to recover more energy), and water that can be sent back to the hydrogen manufacturing unit. The process produces little waste and all of the hydrogen needed in the process can be self-generated from the incoming biomass.

More about the IH2 process

The first is feed conditioning where the raw material is sized (2-4 mm is optimum), mixed and dried.

The reaction takes seconds in the pressurized reactor. By the end of the first stage, the material is in vapor form and the vapor includes hydrocarbon molecules of varying length as well as the water.

The first stage takes out the majority of the oxygen. The second stage takes out the rest as well as undesirable trace elements such as sulfur and nitrogen. A cyclone collects char and ash (about 10-12%), the char having an energy content of 11,000-12,000 BTU/lb.

The process requires a fossil fuel source such as natural gas only at startup. It is used in three places: to heat the first stage reactor; to pre-heat the feed to the second stage reactor and as an initial feed gas in the hydrogen manufacturing unit. The process is self-sufficient and self-sustaining after startup, no longer requiring the need for natural gas addition.

A catalytic thermo-chemical process is used to break the carbon-oxygen bonds and replace them with carbon-hydrogen bonds (and forming water as a result). The process creates heat — so, it can be used to make high pressure steam for a paper machine dryer.

The oxygen from the biomass is removed primarily as water. The water is then used together with light gases produced by the process as the input to create all the hydrogen the system needs together with CO2. The CO2 may be captured to create a product for enhanced oil recovery, food or chemical products.

By the way, CRI reports that “the process equipment is not new or novel nor does it require special materials to construct. It can be refinery or mill integrated although the refinery integration model may have better economics.”

How does this differ from other thermocatalytic technologies?

In 2013, Terry Marker, GTI’s principal investigator on IH2 told ACS, “Our technology is different because we are doing hydropyrolysis at moderate pressures of 350–500 psi under H2 and slightly lower temperature than conventional pyrolysis.”

But that’s not all. In the case of IH2 — compared to, say, Ensyn or KiOR technology, the biomass remains in the reactor for ”several minutes” as opposed to a handful of seconds (or less) in other systems. The combination of those long residence times, the moderate pressures and temperatures and the work of CRI’s magic catalyst — well, everyone says that provides the magic to get the oxygen levels down. And the second-stage reactor hydrogenates the liquids to remove what’s left. Result? A two-reactor system, and hydrocarbons at high yield.

More about the IH2 feedstocks

Wood was the initial choice, because the technology’s original developer GTI knew the material — and because there are abundant supplies at affordable prices. However, the IH2 process has been shown effective at the conversion of a broad range of other biomass types including seaweed, aquatic plants, algae, bagasse, corn stover and even municipal solid waste.

The plant design takes the hot flue gases from the hydrogen manufacturing unit to dry the incoming biomass (assumed to arrive with a 50 percent moisture content and needing to be dried down to 105), which frees all the heat generated by the process to go back to, for example, a paper machine.

Speaking of hydrogen…one thing about some of those other feedstocks; there might be higher yields there. CRI’s elemental analysis provides a hydrogen to carbon atomic ratio which correlates with both the liquid fuel yield and liquid fuel quality; a higher ratio predicts better yields and fuel properties. For example, the H/C ratio for wood is 1.4. But CRI determined that micro algae check in at 1.7, macro algae at 1.6, lemna at 1.5, corn stover at 1.5 and bagasse at 1.4.

The scale-up to date

Work started in a laboratory-scale unit at GTI. .In September 2011, an automated 50-kg feed/day continuous pilot plant output was achieved at GTI, and is being used to confirm earlier yield estimates at smaller scale and confirm catalyst life. The pilot plant has been in continuous operation since March 2012.

Last June, it was revealed that SynSel Energi licensed the technology for a 5 ton/day demonstration plant located in Grenland, Norway is to be completed over a period of several months by Zeton, Inc (Zeton) of Ontario, Canada.  Zeton is the preferred engineering services provider for IH2 facilities at demonstration scale. The IH2 technology is an efficient conversion route for lignocellulosic biomass.

In November, Shell India Markets said it will proceed with the installation of a 5 tonne/day IH2 technology demonstration plant on the site of SIMPL’s new Technology Centre in Bangalore, India.

In late 2014, CRI revealed that “two commercial-scale licenses have been awarded” but the partners in question have not been identified.

NREL determined in 2012 that a 2,000-ton/day wood-based, greenfield plant would have a CAPEX of $232.8 million. The minimum sales price needed to provide overall IRR of 10 percent on top of 60 percent financed at 8 percent was calculated to be $1.76/gal with wood at $71.97 per dry ton. Feedstock accounted for 55 percent of the operating cost., and these costs exclude subsidies.

If the unit was integrated with an existing refinery and did not need to purchase the hydrogen manufacturing unit, a selling price of $1.49/gal would be needed to achieve 10 percent IRR. Good news for pulp and paper customers? A pulp and paper company might be able to reduce CAPEX to as low as $112 million, according to CRI.

The numbers that CRI itself has been using since 2014, however, are focused around a $2.25 per gallon manufacturing cost. And more recently, in the SenSel project, “fully profited manufacturing costs of $2.50/gallon” were cited for a 2000 tonne dry feed/day scale on a USGC basis using a full stand-alone design.

CRI is avoiding discussion of RINs, cellulosic waiver credits and tex credits like the plague. For them, it’s all about competing head-to-head with fossil hydrocarbons. But, those market transition financial vehicles are available right now — and offer enough incentive that this technology, if it worked as designed at scale and if those market transition incentives were available — would be more than cost-competitive with petroleum right now in the U.S., and especially in California. Even in today’s low-priced oil environment.

The numbers reported have been from pilot-scale operations, and we’ve seen from others in the thermocatalytic space instances of woody biomass performing at lower yields at demonstration and commercial scales, and we’ve heard of troubles with maintaining uptime at full commercial-scale as gummy biomass residues become problematic — and we’ve heard instances of low catalyst life when mixed up front with the biomass, which appears to be the case here. So, we’ll stand by to see how the design holds up in scale-up.

Having stated those caveats, this is without question the most exciting thermocatalytic set of developments to come along in years, based on the project momentum, the announced economics and the reputation of the partners. 2016 could be a momentous year for CRI’s IH2.