More
Home Baseload Bioenergy If Corn is King of Biofuels, Tropical Maize May Be Emperor 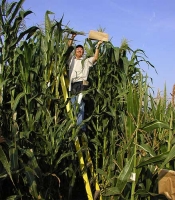 Champaign, Illinois [RenewableEnergyAccess.com] When University of Illinois crop scientist Fred Below began growing tropical maize, the form of corn grown in the tropics, he was looking for novel genes for the utilization of nitrogen fertilizer and was hoping to discover information that could be useful to American corn producers.

Now, however, it appears that maize itself may prove to be the ultimate U.S. biofuels crop.

Early research results show that tropical maize, when grown in the Midwest, requires few crop inputs such as nitrogen fertilizer, chiefly because it does not produce any ears. It also is easier for farmers to integrate into their current operations than some other dedicated energy crops because it can be easily rotated with corn or soybeans, and can be planted, cultivated and harvested with the same equipment U.S. farmers already have.

Finally, tropical maize stalks are believed to require less processing than corn grain, corn stover, switchgrass, Miscanthus giganteus and the scores of other plants now being studied for biofuel production.

What it does produce, straight from the field with no processing, is 25 percent or more sugar—mostly sucrose, fructose and glucose.

“Corn is a short-day plant, so when we grow tropical maize here in the Midwest the long summer days delay flowering, which causes the plant to grow very tall and produce few or no ears,” says Below. Without ears, these plants concentrate sugars in their stalks, he adds. Those sugars could have a dramatic affect on Midwestern production of ethanol and other biofuels.

According to Below, “Midwestern-grown tropical maize easily grows 14 or 15 feet tall compared to the 7-1/2 feet height that is average for conventional hybrid corn. It is all in these tall stalks,” Below explains. “In our early trials, we are finding that these plants build up to a level of 25 percent or higher of sugar in their stalks.

This differs from conventional corn and other crops being grown for biofuels in that the starch found in corn grain and the cellulose in switchgrass, corn stover and other biofuel crops must be treated with enzymes to convert them into sugars that can be then fermented into alcohols such as ethanol.

Storing simple sugars also is more cost-effective for the plant, because it takes a lot of energy to make the complex starches, proteins, and oils present in corn grain. This energy savings per plant could result in more total energy per acre with topical maize, since it produces no grain.

“In terms of biofuel production, tropical maize could be considered the ‘Sugarcane of the Midwest’,” Below said. “The tropical maize we’re growing here at the University of Illinois is very lush, very tall, and very full of sugar.”

He explained that sugarcane used in Brazil to make ethanol is desirable for the same reason: it produces lots of sugar without a high requirement for nitrogen fertilizer, and this sugar can be fermented to alcohol without the middle steps required by high-starch and cellulosic crops. But sugarcane can’t be grown in the Midwest.

The tall stalks of tropical maize are so full of sugar that producers growing it for biofuel production will be able to supply a raw material at least one step closer to being turned into fuel than are ears of corn.

“And growing tropical maize doesn’t break the farmers’ rotation. You can grow tropical maize for one year and then go back to conventional corn or soybeans in subsequent years,” Below said. “Miscanthus, on the other hand, is thought to need a three-year growth cycle between initial planting and harvest and then your land is in Miscanthus. To return to planting corn or soybean necessitates removing the Miscanthus rhizomes.”

Below is studying topical maize along with doctoral candidate Mike Vincent and postdoctoral research associate Matias Ruffo, and in conjunction with University of Illinois Associate Professor Stephen Moose. This latest discovery of high sugar yields from tropical maize became apparent through cooperative work between Below and Moose to characterize genetic variation in response to nitrogen fertilizers.

Currently supported by the National Science Foundation, these studies are a key element to developing maize hybrids with improved nitrogen use efficiency. Both Below and Moose are members of Illinois Maize Breeding and Genetics Laboratory, which has a long history of conducting research that identifies new uses for the maize crop.

Moose now directs one of the longest-running plant genetics experiments in the world, in which more than a century of selective breeding has been applied to alter carbon and nitrogen accumulation in the maize plant. Continued collaboration between Below and Moose will investigate whether materials from these long term selection experiments will further enhance sugar yields from tropical maize.