The Kapuskasing River Waterpower Project is a 22-MW development of four hydroelectric sites along the Kapuskasing River in northeastern Ontario, Canada. Construction on the project began in 2005. What is unique about this project, is how it successfully demonstrates a new business model for hydropower, perhaps the first of its kind, through the collective partnerships of the five owners, which include three First Nation communities (Brunswick House First Nation, Chapleau Ojibwe First Nation and Chapleau Cree First Nation), the municipality of Kapuskasing and the private developer, Hydromega Services Inc.

“What we are seeing with this partnership and elsewhere is economic and business partnerships being brought forward by the communities themselves,” said Paul Norris, president of the Ontario Waterpower Association (OWA). “Now, the communities are equity partners on the project. They are not just consulted in terms of the potential effect on their interest or Aboriginal and Treaty Rights, they are partners in the project. That’s a new business model in hydroelectricity and one that is spreading across the province in our and in other renewable energy sectors.”

Canada’s Aboriginal people have been using natural river systems as a means of transportation and sustenance since long before European settlement. The land and the rivers that run through it remain a central part of Aboriginal culture and the relationship remains very sacred and respected by the surrounding communities. 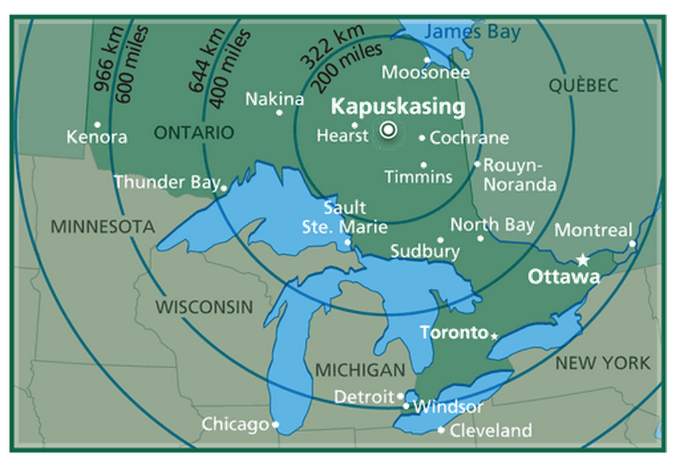 Kapuskasing is a small community located on the Kapuskasing River in Northern Ontario.

When infrastructure and towns were first being developed in Ontario, people naturally came to rivers, first for transportation, then for economic opportunities such as log driving, grist mills, local electricity and/or mechanical generation. Waterpower was the economic engine upon which the initial prosperity of the province was built.

Up until 1951, all of Ontario’s electricity came from falling water. In the 1960s and 1970s, new development in the province moved to coal and nuclear facilities, but Ontario’s hydroelectric fleet has remained the backbone of the electricity supply. In the late 1990s, with the commercialization of Ontario’s hydroelectric sector, there was renewed interest in the development of waterpower sites.

To support this renewed interest, the Ontario Ministry of Natural Resources (MNR) introduced the Waterpower Site Release Policy in 2004 — outlining the process for accessing Crown land to develop waterpower resources. The goal of the policy was to contribute to the environmental, social and economic wellbeing of the people of Ontario, including its Aboriginal communities, through the provision of opportunities for waterpower development and the sustainable development of Ontario’s Crown land, while recognizing the MNR’s overall mission of ecological sustainability.

“Our goal and our destiny is to be self-governing, but to be self-governing you have to have an economic engine and the economic engine that we have is the resources on the land; but having said that, we can’t abuse them,” said Chief Keith “Keeter” Corston, Chapleau Cree First Nation. “For Canada’s First Nations in general, it’s about doing it in a very respectful way, having as little environmental impact as possible and as small of a footprint as possible. It’s our territory, we will look after it, proponents will ask permission to do something on the land and if it’s culturally and environmentally friendly we will consider it.”

When Hydromega, a private sector developer, approached the communities in 2005, they initiated a dialogue and, most importantly, asked the First Nations how they could build the facility together. Some characteristics that made Hydromega an attractive partner to the First Nation communities were its willingness to cooperate, its culturally sensitive approach, and the fact that it was a small company with a track record of openness, inclusiveness and community acceptance.

Chief Corston explains, “They were very polite, showed the potential project plan, which was as environmentally friendly and respectful as possible. Most importantly, they were willing to adapt their project plans.”

One of the main requirements of the community was that they needed to have an ownership role in the assets because the multigenerational revenue stream generated would then be filtered back into the communities.

“Hydromega was not the only developer that the communities met with. It took time to find the right match/partner,” said Jason Batise, economic development and technical services advisor for the Wabun Tribal Council.

“Hydromega is a renewable energy company and for the last 25 years has remained one of the few private hydro companies in Quebec,” said Philip Lawee, director of Hydromega. “Once all partners agreed to the project, we submitted a proposal, which was reviewed by the MNR and stakeholder communities and the proposal was selected.”

In September 2005, MNR awarded Hydromega the opportunity to develop waterpower facilities on the Kapuskasing River, and the company became the first applicant to be awarded the opportunity for waterpower development under the MNR site release process.

Through the environmental assessment and approvals process, the project evolved from two 10-MW installations into four smaller hydro units with a total generating capacity of about 22 MW. This resulted in an increase in power generating capability and a simultaneous reduction in the ecological affects upstream, as well as the elimination of a long bypass. 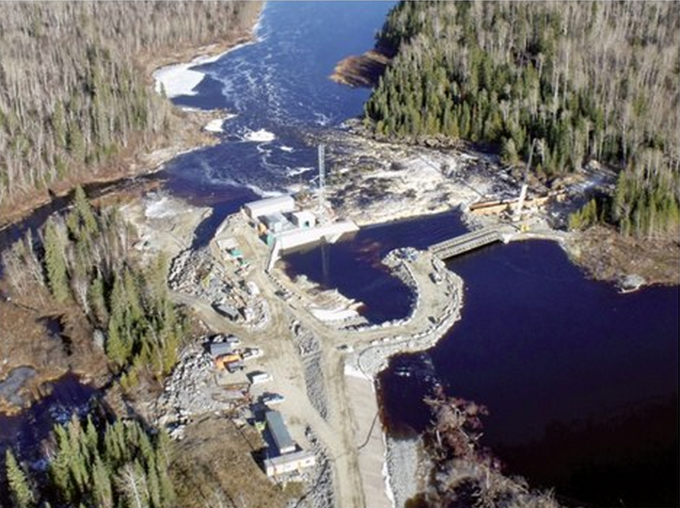 The four facilities are located south of the town of Kapuskasing. Each has an identical design as seen above, with the powerhouse situated on the left bank of the river. Credit: Hydromega.

“Projects always evolve, you start them with a preliminary design, acquire more information in the field, start your environmental assessment, get your geotechnical information, then you improve your design — in this case to make four facilities instead of two,” said Stephan Boyer, project manager with Hydromega. “This also allowed us to reduce the size and height of the dam to make the projects have almost identical facilities. It also simplified the ownership of this particular project. Each community is a partner in its own facility: Brunswick House First Nation, Chapleau Ojibwe First Nation, Chapleau-Cree First Nation and the town of Kapuskasing.”

Economic development involving waterpower projects is a long-term venture. The Kapuskasing project has already aided in job creation and economic activity within the region. A socioeconomic analysis commissioned in 2011 by MNR estimated that across the province, small hydro was creating almost 10,000 direct, indirect and induced jobs. Now that the projects are being commissioned, the revenue stream will help with infrastructure, capacity development, training and creating programs for the local communities. As has been seen in other industry/Aboriginal partnerships, these projects can provide a springboard for other community investments and business propositions.

“We are proud of the accomplishments, engineering, construction and benefits it will provide to Aboriginal and surrounding communities,” Batise said. “I’m excited to see how far we’ve come and excited about the renewable electricity that’s being generated. On the other hand, you do look around and see how mother earth has been changed, which can be difficult. At the end of the day it’s about choices, and for our First Nations they have to live in this modern world and be part of these facilities. We need to send our kids to school and have health and education as priority and we have to pay for that. By participating in projects like this on our land, it allows us to do that.”

“The quality of life is improving, the day of old is gone and the new day of talking and working together is here,” further explains Corston. “We’ve lost a lot of tradition and culture, but that is starting to come back.”

What was most surprising, in terms of benefits from the project, was the effect the project had on Aboriginal-to-Aboriginal partnerships. Every community is different and, like most groups in societies, can have alternate views. Relationship building occurred within the three Aboriginal communities that were a part of this project.

“Over time, the communities have gotten closer together because of the meetings and shared experiences,” said Kevin Tangie, Economic Development Officer for Brunswick House First Nation. “The projects in these areas and shared territories are beneficial to everybody and if we can make shared agreements and partnerships, that’s better moving forward.”

In 2013, OWA released the documentary Our Heritage, Our Future – the Kapuskasing River Waterpower Project, which chronicles the development of the partnerships on this project.

Author bio: Stephanie Landers is communications and public outreach coordinator for the Ontario Waterpower Association (OWA). This article is based on the documentary “Our Heritage, Our Future – The Kapuskasing River Waterpower Project,” available from OWA.

This article was originally published in Hydro Review and was reprinted with permission.