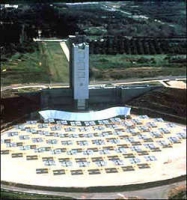 Jerusalem, Israel [RenewableEnergyAccess.com] Using concentrated solar energy, an international team of scientists from Israel, Sweden, Switzerland and France have discovered a clean, safe and inexpensive way to produce hydrogen. The key is using solar energy as the energy source in the production of zinc from zinc oxide.

Previously, producing hydrogen on a large scale was costly due to the temperatures exceeding 2,500 degrees C in order to separate water molecules. But releasing hydrogen by extracting oxygen from water can also be accomplished using pure zinc, which calls for lower temperatures of 350 degrees C, thereby lowering costs. But heat and electricity, which are required to extract zinc, considered both an abundant and a natural choice for producing hydrogen, from zinc oxide, have traditionally been powered by fossil fuels. The solar solution to achieve the high temperatures (around 1750 degrees C) required for the production of zinc from zinc oxide came in 2004, when the European Union and the Swiss Federal Office of Science and Education funded research to explore using a 45 kW solar furnace in Villigen, Switzerland, a 75kW solar simulator in Zurich and a vary large solar research facility with 1 MW output at the Weitzman Institute in Israel. A mixture of zinc oxide and small amounts of coal is placed inside the solar furnace atop the solar tower. Solar light is reflected by a large array of heliostats (computer guided highly reflective mirrors) to a hyperbolic mirror located inside the tower, producing highly concentrated heat inside the solar furnace. At more than 1200 degrees C the zinc oxide breaks down into zinc and oxygen, which in turn recombines with the carbon to create CO as a minor byproduct. The zinc is then cooled down to create a fine powder that can be safely handled and transported. It is a simpler process to produce hydrogen from the zinc powder: the zinc is mixed with water at 350 degrees C. The oxygen inside the water recombines with the zinc to produce zinc oxide once again and the byproduct is pure hydrogen. The Weitzman team found that by adding small amounts of carbon in the form of coal it further reduced the zinc production to a more manageable temperature. In the future, the team sees the possibility of replacing the coal completely with biomass. This entire process is said to have advantages over existing ways of producing hydrogen, not the least of which is that it is clean and, when biomass replaces coal as an additive to the zinc oxide mix, the entire process is potentially nonpolluting. It is also thought that this new method based on the production of zinc may open the door for a hydrogen-based economy. Could the future call for filling up our hydrogen-running cars with zinc powder?