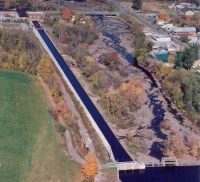 Liverpool, New York [RenewableEnergyAccess.com] Up to 3.4 megawatts (MW) of incremental hydropower will be added to New York’s renewable power supply due to Brookfield Power’s recent receipt of a capacity amendment to its Federal Energy Regulatory Commission (FERC) operating license for the Lower Raquette River Project.

More than $12 million will upgrade equipment in the four hydroelectric generating stations on the Raquette River in St. Lawrence County, New York. When complete, the improvements will provide 24,912 megawatt-hours (MWh) of incremental renewable power. “Improvements made under this plan may be eligible for renewable tax incentives as outlined in the federal Energy Policy Act of 2005 and states’ renewable portfolio standards,” said David Youlen, Brookfield Power’s Vice President Operations. Fieldwork to facilitate the installation of the new equipment is currently under way at the East Norfolk and Norfolk plants, and will commence in the summer of 2007 at the Norwood and Raymondville plants. Target in-service dates are May and June 2007 for East Norfolk and Norfolk, respectively. The remainder of the site upgrades will be in-service by mid-November 2007. “The enhancements are an excellent way to showcase the potential that exists to responsibly grow hydropower — a domestic source of clean, renewable power,” said Youlen. To date, six projects under Brookfield Power’s portfolio improvement plan have received FERC license amendments, eventually adding 33,011 MWh of incremental hydropower by the end of 2007.