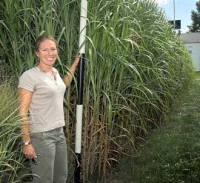 Champaign, Illinois [RenewableEnergyAccess.com] Ethanol and biodiesel are the biofuel favorites in the US right now but new research is suggesting some new contenders may be on the way. Giant Miscanthus (Miscanthus x giganteus), a hybrid grass that can grow 13 feet high, may become a valuable renewable energy as a source of solid fuel, researchers at the University of Illinois at Urbana-Champaign (UIUC) say.

Stephen P. Long, professor of crop sciences and of plant biology at UIUC recently gave that message to the BA Festival of Science in Ireland, sponsored by the British Association for the Advancement of Science. Here in the states, two of Long’s doctoral students, Emily A. Heaton and Frank G. Dohleman, delivered their Miscanthus findings at the 49th annual Agronomy Day, held on the UIUC campus and attended by more than 1,100 visitors from across the Midwest. “Forty percent of U.S. energy is used as electricity,” Heaton said. “The easiest way to get electricity is using a solid fuel such as coal.” They have found that dry, leafless Miscanthus stems can be used as a solid fuel. The cool-weather-friendly perennial grass grows from an underground stem-like organ called a rhizome. A crop native to Asia and a relative of sugarcane, Miscanthus drops its leaves in the winter, leaving behind tall bamboo-like stems that can be harvested in spring and burned for fuel. Using a computer simulation, Heaton predicted that if just 10 percent of Illinois land mass was devoted to Miscanthus, it could provide 50 percent of Illinois’ electricity needs. Using Miscanthus for energy would not necessarily reduce energy costs in the short term, Heaton said, but there would be significant savings in carbon dioxide production. Rhizomatous grasses such as Miscanthus are very clean fuels, said Dohleman, who is studying for his doctorate in plant biology. Nutrients such as nitrogen are transferred to the rhizome to be saved until the next growing season, he said. Burning Miscanthus produces only as much carbon dioxide as it removes from the air as it grows, said Heaton, who is seeking her doctorate in crop sciences. That balance means there is no net effect on atmospheric carbon dioxide levels, which is not the case with fossil fuels, she said. Miscanthus also is a very efficient fuel, because the energy ratio of input to output is less than 0.2, Heaton said. In contrast, the ratios exceed 0.8 for ethanol and biodiesel from canola, which are other plant-derived energy sources. In addition to being a clean, efficient and renewable fuel source, Miscanthus is easy to grow. Upon reaching maturity, Miscanthus has few needs as it outgrows weeds, requires little water and minimal fertilizer and thrives in untilled fields, Heaton said, where various wildlife species make their homes in the plant’s leafy canopy and surrounding undisturbed soil. Long said Illinois researchers have found that Miscanthus grown in the state has greater crop yields than in Europe, where it has been used commercially for years. Last year, Illinois researchers obtained 60 tons per hectare (2.47 acre), Long said at the BA Festival of Science. “It is my hope that Illinois will take the lead in renewable energy and that the state will benefit from that lead.” Full-grown plants produce 10-30 tons per acre dry weight each year. Miscanthus yields in lowland areas around the Alps, where the climate is similar to the Midwest, are at least 25 tons per acre dry weight, wrote Heaton and colleagues in a paper published in 2004 in the journal Mitigation and Adaptation Strategies for Global Change. The Illinois Miscanthus crop began three years ago when Heaton planted 400 Miscanthus rhizomes, which were generated from three rhizomes donated by the Turfgrass Program in the department of natural resources and environmental sciences. Because Miscanthus is sterile, cuttings of Miscanthus rhizomes must be used to create new plants. Now in their third year, the three 33-by-33 feet Miscanthus plots are considered mature. Their 10-foot tall stems are twice as high as switchgrass, a prairie grass native to Illinois. Grown side by side, Miscanthus produces more than twice as much biomass as switchgrass, Heaton said. To investigate how Miscanthus is so productive, Dohleman and others’ preliminary results show that Miscanthus has a 27 percent greater rate of photosynthesis at midday compared with switchgrass – also an increasingly popular option for efficient biomass. Other varieties of Miscanthus have been grown successfully in Indiana, Michigan and Ohio. However, the giant Miscanthus being grown by the Illinois researchers has the greatest potential as a fuel source because of its high yields and because it is sterile and cannot become a weed, Heaton said. “Miscanthus sacchariflorus and some of the other fertile Miscanthus species can be quite invasive,” she said. The next step, Long said, is to demonstrate how Miscanthus goes from a plant to a power source. Existing U.S. power plants could be modified to use Miscanthus for fuel as in Europe, he said. Long is collaborating with researchers at the Institute of Genomic Biology to study whether Miscanthus could be converted to alcohol, which can also be used as fuel.