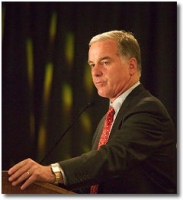 Democratic presidential candidate Governor Howard Dean, announced his six-point plan to create a thriving renewable energy industry to provide clean, reliable, and secure power for millions of Americans. Dean joined local Worth County residents in a discussion of the economic impact of renewable energy on communities in Worth County, home to a wind farm and future home to ethanol processing.

Joice, Iowa – October 24, 2003 [SolarAccess.com] “It’s time we start investing in those resources we have right here and stop relying on foreign oil and fossil fuels,” Dean said. “Iowa is one of the best states in the nation to produce wind energy and biofuels. Wind farms, ethanol plants, and other sources of renewable energy create jobs in communities.” Governor Dean proposes creating a renewable portfolio standard (RPS), requiring more American biofuels, boosting wind energy transmission, creating a solar power tax credit, extending the production tax credit (PTC), and investing in renewable energy and efficiency as part of the Fund to Restore America. The Dean campaign said their plan would create 15,000 new energy related jobs in Iowa and US$126 billion in new local property tax revenue by 2020. “Renewable energy makes sense for the economy, for our environment, and for our national security,” said Dean. “It is time for this country to take advantage of the technology and renewable resources already available.” The new Golden Grains ethanol facility being built in Worth County will make Iowa the number one ethanol producer in the nation. Top of Iowa wind farm in Joice will pay Worth County more than $6 million in taxes over the next 20 years and created 200 construction jobs. Gov. Dean’s campaign said the former Vermont Governor lead the way in renewable energy with a comprehensive energy program making Vermont more efficient and making more use of renewables, said his campaign. Governor Dean promoted the development and consumption of both biomass and wind energy as well as making it possible for consumers to offset energy costs by generating renewable energy and selling it back to the grid (net metering). Dean’s Plan for Renewable Energy: Abundant energy at fair prices was at the core of American prosperity throughout the 20th Century and remains of central importance to our quality of life in the 21st. But the US is at a crossroads; the path we decide upon now will determine what kind of energy future the 21st century will hold. Unfortunately, the possibilities for a clean, affordable and sustainable energy future are being undermined by the Bush-Cheney policy of import, drill and burn. Their plan has been written behind closed doors with input coming only from special interests and lobbyists. Governor Dean believes we need to replace this approach with a policy that harnesses the powers of American innovation. The comprehensive energy plan that Dean will release later this fall stresses five main goals: – Ensure reliable, diverse, and low cost energy supplies at stable prices to all Americans – Strengthen our national security – Create jobs and stimulate economic growth – Spur innovation and make America the world’s energy technology leader in the 21st Century – Protect our environment Central to Governor Dean’s approach will be a commitment to renewable energy. His stated goals follow: Invest in Renewable Energy Sources Replacing dirty, inefficient power production with clean, renewable energy sources has several economic and non-economic benefits, which are not captured in the current pricing regime. As a result, renewable resources often do not look cost competitive, even when they are the best investment we can make in our future. To help overcome these marketplace distortions, Governor Dean’s proposes to: Create a Renewable Portfolio Standard 20 percent by 2020: Despite a bipartisan plea from 53 Senators, the GOP leadership in Congress buckled under to oil and gas interests and rejected calls to require that our nation generate 10 percent of its electricity from renewable sources. Governor Dean will put the interests of Americans ahead of special interests and require that our nation generate 20 percent of its electricity from renewable sources by 2020. To ensure efficient and flexible implementation, Dean will create a renewable energy credit trading system. Require More American Biofuels: Governor Dean will require that every gallon of the US, on average, contain 10 percent American biofuels like ethanol and soy-diesel. As with the renewable energy requirement, Dean will implement a biofuels credit trading system to allow the market to determine where biofuels can be most efficiently used. Boost Wind Energy Transmission: To tap this massive wind energy potential of the Plains, Governor Dean will work with state and local governments, renewable generators and transmission utilities to breakdown regulatory barriers, eliminate transmission capacity deficiencies and identify possible transmission investments that could jumpstart new renewable generation Create a Solar Power Tax Credit: Governor Dean will boost demand for solar technology in the near-and long-terms by implementing a consumer tax credit for residential solar power and increasing federal support for R&D into solar technologies to reduce the cost of solar cells. Extend the Production Tax Credit for More Renewables: Governor Dean will extend the Production Tax Credit, which expires at the end of the year. Dean will also expand the tax credit to cover more types of renewable power generation including geothermal, solar and biomass. Invest in Renewable Energy and Efficiency as Part of the Fund to Restore America: Governor Dean’s economic plan calls for a $100 billion investment in America over two years: the Fund to Restore America. Dean will encourage states to dedicate a portion of the Fund to investments in renewable generation and in supplemental transmission capability needed to spark new renewable generation.