More
Home Baseload Bioenergy How Will Renewables Fare in the New Political Environment? 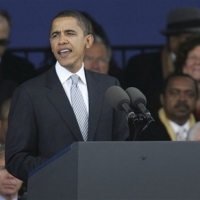 Washington, D.C., United States [RenewableEnergyWorld.com] Americans have heard the Presidential and Congressional candidates talk about renewable energy for the last 24 months. Now it’s up to Democrats to live up to the talk. With a Democrat in the White House and a significant Democratic majority in Congress, industry leaders are hopeful that renewable energies will become a higher national priority.

“To date, we have had no leadership capable of moving the world in a new direction. President Obama can be this leader, he will be the catalyst for the dawn of the solar revolution and the beginning of the transition to a truly renewable economy,” said Financial Analyst J. Peter Lynch

President-elect Barack Obama and Democrats in the House and Senate will have many items on the clean-energy agenda in 2009. Extending the Production Tax Credit, creating a Renewable Portfolio Standard and passing carbon cap and trade legislation are some of the top goals for lawmakers.

Both parties showed stronger support for clean energy and energy efficiency efforts throughout the campaign season. While the Congressional stalemate over the extension of the Investment and Production Tax Credits tainted the political conversation over renewables in 2008, there was an obvious bi-partisan shift in favor of renewable energy on the campaign trail.

There has been a feeling among many professionals and analysts, however, that a Democratic White House and Congress will give more robust support to the industry.

“President-elect Obama is the first national presidential candidate who has explicitly campaigned for renewable technologies and green jobs – and the U.S. will now more likely embrace more comprehensive policies that will drive these U.S.-created technologies to become integrated into our nation’s energy mix resulting in significantly lower energy imports and greenhouse gas emissions,” said Scott Sklar, President of the Stella Group.

All eyes are now on the Democrats to see how high on the priority list renewable energy will be over the coming years. To see a comprehensive list of the Presidential and Congressional candidates’ positions on renewable energy policies, see the story published this August from Solar Nation.

In May, President-elect Obama visited Oregon-based PV Powered, an inverter manufacturer. There he took a tour of the company’s manufacturing facility and called PV Powered and other renewable energy companies the “workshop of the future,” pledging to invest US $150 billion over 10 years in renewable energy.

Some renewable energy experts and analysts say that Obama may use the job-creating opportunity that the renewable energy industry holds as a way to usher in a stronger economy while bringing more solar and wind power into the energy mix. (See Bloomberg.com and New York Times stories below.)