The U.S. grid grew up as many localized networks designed to deliver coal-generated electricity. Over the course of the 20th century, as Big Coal consolidated its control over increasingly larger parts of the electricity market, the local systems connected one to another. Worse than being designed by ostriches, there was actually no designer except Big Coal’s ambition. Given its history, the grid works surprisingly well but, at best, it is a clumsy and fragile system, frequently functioning at the edge of failure. Though not the subject of stimulating cocktail party chatter, the national transmission system has won the attention of important political leaders and policy makers for one simple reason: WITHOUT a better grid, getting significantly more New Energy TO consumers and getting more Energy Efficient behavior FROM them will be impossible. WITH state of the art transmission capabilities, as embodied in emerging Smart Grid paradigms, the 21st century’s New Energy economy would be a big step closer to reality. Smart Grid Implementation; Strategies for Success, by Rebecca L. Grant for the Lexington Institute, details why a Smart Grid is urgently needed and how to make it happen. The beginnings of the implementation of a national Smart Grid are emerging around the country. Utilities and communities had scheduled the deployment of 58 million smart meters by the middle of the coming decade even before 2009’s American Recovery and Reinvestment Act allotted $4.5 billion in feed cash to further the effort. A new nationwide system can deliver more power more reliably and efficiently and incorporate much more New Energy than is now being used – but it will require much of both utilities and consumers. ::continue:: 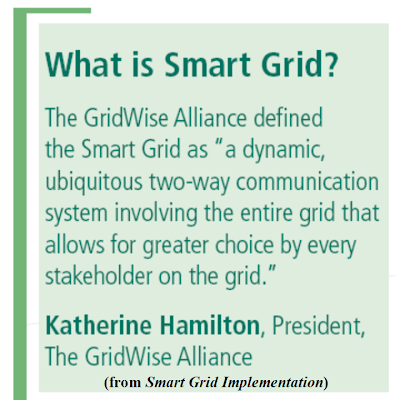 click to enlarge Four challenges stand out: (1) Teaching consumers how to take advantage of the Smart Grid’s capabilities; (2) Making the Smart Grid safe from cyber attacks while keeping it open at both the distributor and ratepayer ends to allow utilities and consumers the interactive opportunities necessary to streamline energy use, (3) Building a nationwide network of interactivity that is based on a single set of interoperable technical standards, and (4) Providing for the transmission of electricity from the full spectrum of sources efficiently. Central to the need for a Smart Grid are 2 crucially interwoven facts: (1) The present transmission system is entirely inadequate to allow for significantly greater integration of New Energy and the use of more Energy Efficient practices, and (2) a Smart Grid will allow much greater integration of New Energy and the use of Energy Efficient practices by electricity sellers, distributors and consumers. The National Institute of Standards and Technology (NIST) has defined 7 domains in which there are Smart Grid challenges that will require a spectrum of acceptances and solutions if the “smart” concept is to be translated into reality: (1) Customers, (2) Markets, (3) Service Providers, (4) Operations, (5) Bulk Generation, (6) Transmission, and (7) Distribution. 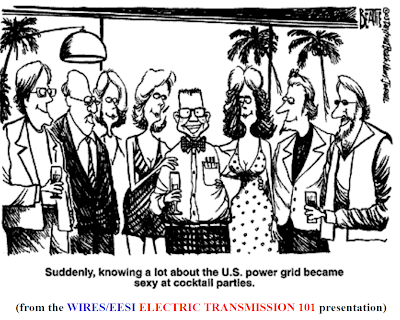 click to enlarge This post is based on Smart Grid Implementation; Strategies for Success by Rebecca L. Grant (May 2010, Lexington Institute) Click thru for more on this and more NewEnergyNews