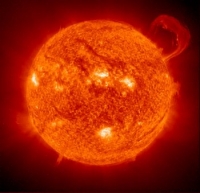 If solar power is going to play a significant role in the energy equation of the future, advances in technologies to store that power are needed — as well as more investment by manufacturers, concludes a new federally funded study by Dr. Erin Baker, Assistant Professor in the Department of Mechanical and Industrial Engineering at the University of Massachusetts Amherst.

“Advanced Solar R&D: Applying Expert Elicitations to Inform Climate Policy” explores the viability of sun-fueled technologies through a combination of evaluations by experts and economic modeling, allowing the researchers to look at solar power’s role in the electricity sector in 15-year chunks through 2095. Baker, acknowledging that the study is preliminary, is pleased that the analytic method, which is commonly applied in industry, can be applied at the public policy level. “Our analysis should be seen as a tool for informing policy makers on how to balance research and development investments among the various alternative energy technologies,” says Baker. “We hope it takes some of the speculation out of how to craft good climate change policies.” Baker and her colleagues, Jeffrey Keisler of UMass Boston, and Haewon Chon, a Ph.D. student at the University of Maryland working with the Joint Global Change Research Institute, analyzed the risks of certain investments, and solicited advice from experts to identify the key technological breakthroughs in solar technology that would lower its costs. They also asked what hurdles might make it hard to move the technology from the lab to production, and the probability of success, given funding trajectory. The researchers then fed that information into a model that allowed them to play out various investment scenarios. The model incorporates information about land use and the energy sector in 14 world regions as well as information on a range of electricity technologies including nuclear power, fossil fuels, biofuels, and solar and wind power. It allows the researchers to look forward in 15-year intervals to 2095, and to ask what’s needed to ensure widespread use of cheap solar power, and how much that would reduce emissions. While the scientists found that experts disagree on how much investment is needed to bring about the breakthroughs required to make solar technology widespread and affordable, experts do agree that federal dollars alone aren’t enough; more investment must come from the manufacturing sector. Experts also agreed on the priority order of such investment: — Focus first on getting power from the new inorganic materials that show promise but are far from viable for large-scale production. — Second, focus on purely organic cells with organic semiconductors; these hold the promise of low costs but still haven’t achieved high levels of efficiency, causing serious stability problems. — Lastly, investigate the so-called third-generation cells, which use entirely different technology but may ultimately yield much more power. Baker, whose research focuses on decision making under uncertainty, with a focus on environmental policy, has been invited to submit the article to Energy Economics as part of a special issue on Technological Change and Uncertainty in Environmental Economics. It is the first in a series; future reports will assess technologies that harvest wind, biofuels and carbon capture. Last year, the U.S. Department of Energy awarded $347,000 to Baker’s team to investigate the costs and benefits associated with investing in alternative energies.