More
Home Baseload Bioenergy How Manomet Got It Backwards: Challenging the “Debt-then-dividend” Axiom

This short article challenges the assumption that there is always a carbon debt incurred first and then a carbon dividend realized later (debt-then-dividend) when using woody biomass for energy.

The Manomet Study has generated a great deal of interest and controversy about the greenhouse gas impact of using woody biomass for energy.

The Manomet authors have that assumption so deeply ingrained into their logic that it is presented as axiomatic. In complex systems theory one of the points of study is the concept that “selection is information.” By presenting the debt-then-dividend assumption as an axiom, the Manomet authors have limited the scope of their view of the world and thereby have removed information from the system. Their model allows no conclusion other than those that accrue from their debt-then-dividend framework.

The Fallacy that Underpins the Manomet Argument

As some critiques have noted, the Manomet Study has a simplistic view of forestry that has been characterized as a “stand versus landscape” argument:

Manomet’s reply to that critique includes a statement that embodies this paper’s thesis that Manomet’s authors have subtly postulated that there is only one view of how forests work. The foundation of the Manomet argument is that there is a debt when the CO2 is released from combustion, and over a growth cycle the debt is repaid as the trees grow and gather carbon from the atmosphere.

Taken to the logical extreme, the Manomet study’s logic essentially begins with a full grown tree, then that tree is harvested and used for energy while its stored carbon is released as CO2 (the debt), and then they continue to watch the empty spot where the tree was for 30 to 50 years while a new tree grows in its place. Only after that regrowth is the carbon debt repaid (the dividend). Using this debt-then-dividend model, figure 1 shows the pattern of net CO2 from combustion. Note that we ignore the life cycle carbon accumulation. For both fossil fuels and woody biomass fuels, the values should be considered, but this analysis is strictly about combustion. 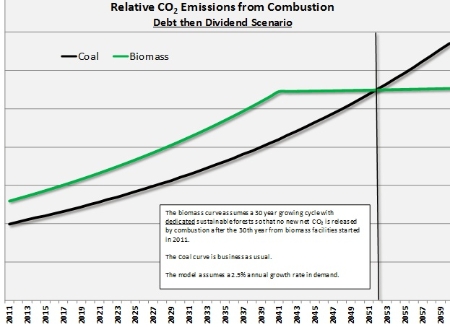 Figure 1, shown above, is similar to those in the Manomet Study. Note that the model compares biomass and coal with the assumption that all capacity could be biomass beginning this year. It also assumes a 30 year growth cycle. The actual growth time to maturity will vary and is typically longer than 30 years, but for this exercise the time assumption only affects the proportion of the total forest stock that can be sustainably harvested each year. This exercise does not try to quantify the level of sustainable harvest; but there is some level of sustainable harvest that will allow a significant proportion of fossil fuel use to be displaced. See an example here.

The assumed energy conversion efficiencies for both coal and biomass (both only making electricity) are 30 percent. In this comparison scenario, the “dividend” from biomass derived energy is defined as that point in time when the net CO2 from combustion of biomass becomes less than the net from coal for the same energy demand. In this case, the “dividend” from biomass generation versus common coal generation does not materialize until 2052. The Manomet Study does show that there will be a dividend at some point in the future as long as trees grow to replace those used for energy.

The “stand versus landscape” critique suggests that the Manomet error is to ignore the fact that the forest is a system. The Manomet logic would suggest that some stand of trees is picked and every tree is harvested. In actual forest systems, assuming sustainable forestry practices (the net stock of the forest systems resource is never depleted), the carbon released by combustion from selective harvesting is offset by carbon accumulation from the rest of the system’s continued growth.

Implicit in the Manomet “debt-then-dividend” logic is that the timeline for the carbon accounting starts the moment the tree is harvested.

Suppose we dismiss their axiomatic assumption and we start the carbon accounting at a point in the past.

In our 1,000,000 ton system, if we start our accounting on January 1, we accrue our dividend first before we harvest the benefits. There is never a debt. Let’s call this a “dividend-then-benefit” logic.

We do not even have to assume a forest system as long as we have a history of sustainable forestry practices. We can look just a small group of trees. Those trees have been gathering carbon (some of which is from the combustion of fossil fuels) for the same 30 years that was assumed for the debt-then-dividend chart above. We have accrued a dividend. We can then derive a benefit from that dividend by using those trees for energy.

As with any limited sustainable resource, the method of use matters. Using the fuel in high efficiency and clean systems is our axiomatic assumption. That would mean a very high proportion of the energy would be used for thermal needs either for heating or for thermal process needs that are currently provided by fossil fuels. Home heating with pellets, heating larger buildings with chips, or combined heat and power for industry would be our recommended uses. 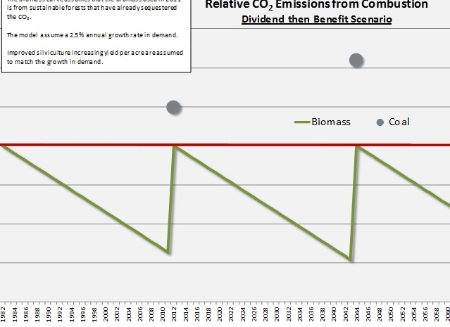 Figure 2, shown above, shows this scenario. The model assumes that the carbon accounting for this “stand” begins 30 years ago. It also assumes that as the demand for power generation increases at the assumed rate of 2.5 percent per year, the sustainable biomass necessary to meet this demand also increases due to improved silviculture.

In this scenario, the accounting starts in 1982. The red line in figure 2 is the zero net carbon level (again, this accounting is not including any other carbon other than that from combustion and it does not consider the carbon in the stumps and other un-harvested components of the “stand”). The stand captures carbon for 30 years. The down sloping green line shows the net carbon dividend accruing as carbon is sequestered.

In 2011, we compare the net CO2 from the stand being used for energy and for a quantity of coal being used that yields the same amount of energy. The stand gives up its dividend, the coal releases its net new carbon (the grey ball), regrows over the next 30 years (it is larger this time due to improved silviculture) and has enough energy to match the necessary coal needed for the increased demand. This exercise is based on data that shows how yields in the northern forests could be significantly improved (as they are already in European managed forests). If yields do not improve, then the grey balls would be at the same level and the net carbon dividend over each growth cycle would be the same.

Clearly this scenario has a number of simplifying assumptions that may change the shape and magnitude of the points on the chart. But the underlying conclusion is also clear: if biomass is harvested from existing forests that will be sustainably managed in the future, there is no debt. 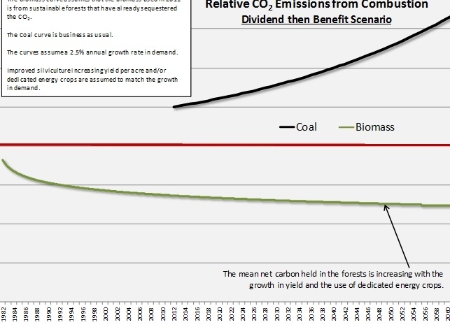 Figure 3 (above) looks at the same “dividend-then-benefit” story from a system perspective rather than just a single set of trees, the benefits of using sustainably managed forests for energy versus business as usual become even clearer. The assumption is that those trees harvested every year starting in 2011 have completed their dividend gathering in the preceding growth cycle which, in this model, began for the first trees in 1982. Also, we can broaden the scope for increased yield to include not only better forest management practices but also dedicated energy crops.

Sustainable use of the Accrued Carbon Dividend

Of course this analysis depends upon the assumptions that the stock of biomass (and therefore sequestered carbon) has been more or less constant for a growth cycle and that the yield per acre would be expected to improve in the future.

There is detailed analysis on this that can be seen in the full paper which can be downloaded from www.FutureMetrics.com.

An analysis of highly reliable existing information on Maine’s forest resources indicates that, with improvements in forest utilization and silviculture, Maine’s forests are capable of producing substantially more wood than they do currently, while at the same time retaining the number of den trees, snags, large dead logs, and limbs and tops needed to maintain or improve site fertility, wildlife populations, and biodiversity.

The Manomet study has an embedded axiomatic assumption regarding carbon accounting. The foundation of the study is a “debt-then-dividend” flow for carbon accounting. This paper has shown that this so-called axiom is a flawed basis for a proper understanding of the carbon benefits that wood-to-energy can provide. In fact, Manomet gets it backwards. There is no debt if the forest system has been in growth-to-harvest equilibrium or has a growth-to-harvest ratio greater than one and the forest is managed sustainably so that the net stock of biomass does not deplete. This is true in aggregate for Maine and it is true in other locations.

Wood-to-energy from sustainably managed forests, as this paper has shown and as all of Europe has codified in its carbon accounting rules, can provide net zero carbon emission or even positive carbon sequestration if the woody biomass stock is not depleted or grows over time. This is based on the combustion of the fuel only. A complete life cycle analysis will, as long a fossil fuel is used in harvesting and transportation, always have some positive carbon emission components.

William Strauss, an economist, is a Director of Maine Energy Systems. He is also the president of FutureMetrics, a Maine based financial and economic consulting firm. William Strauss also served on the Maine Governor’s Wood-to-Energy Task Force in 2008 from its inception to the completion of its final report to the governor. Dr. Strauss is also a member of the Maine Pellet Fuels Association.