More
Home Baseload Hydropower How High a Fee Must Fossil Carbon Pay in the Absence of... 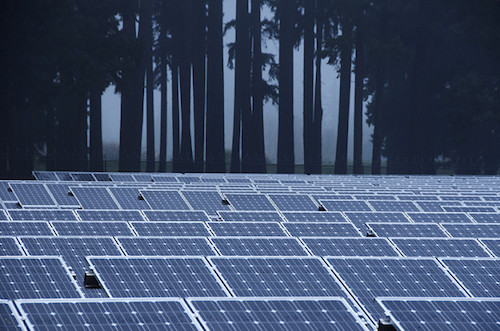 Over the past decade solar costs have declined markedly, but they’re unlikely to continue falling. Thus, revenue from sales of solar electricity will become more important for business success. Revenue in turn depends on receipts per kWh, capacity factor, and tax benefits like accelerated depreciation and the investment tax credit (ITC).

Solar growth depends crucially on tax benefits, so the industry breathed a sigh of relief last year when the ITC extension passed. But a major concern now is how solar can compete in a few years when the ITC declines.

Solar advocates note that fossil fuel burners have themselves benefited from considerable tax benefits which they are loathe to relinquish, and that the carbon dioxide they produce is destroying the world’s climate. Economists note further that if the world were fair, fossil fuel would pay for the damage it does.

To some that suggests cap and trade to make fossil fuel more costly. However, cap and trade has failed worldwide because auction prices have not increased to make enough of a difference — $12 per tonne of CO2or a penny or so per kWh.

A more effective policy has been tested in British Columbia, which places a fee on all fossil fuel and returns all the revenue to taxpayers. A similar revenue neutral proposal forms ballot proposition I-732 in neighboring Washington State. And a nationwide proposal by Citizens’ Climate Lobby would return all revenue by check to families the way the Alaska Permanent Fund does.

How does a carbon fee compare with the ITC? Put another way, what level of carbon fee is equivalent to the existing ITC, and how would the increased revenues for solar owners affect profitability? Analysis in several states provides some insight.

The devil is in the details. The carbon content in fossil generation varies from state to state and from utility to utility. States with higher proportions of coal generation like New Mexico and Ohio produce more CO2 than those with efficient, gas-fired generation or hydro, like California.

Looking just at residential customers, solar’s value is the reduction in customers’ bills. California’s costs top this value with prices of 16 cents, so solar is more attractive there than, for example, in Ohio. California also has a better solar resource than Ohio.

In fact, because of tiered rate structures, most customers’ reductions are higher than these averages, but the principal is the same and so will be the conclusion described below.

Profitability for a residential installation serves as an example. Assumptions include a cost of $3/watt, representative capacity factors in each state, 20-year life, 30 percent ITC and five-year MACRS depreciation. Calculation also assumes that a corporate owner with 35 percent tax rate can take full advantage of tax benefits. Profitability varies from state to state, of course, and it’s apparent why California has been so successful.

Then the question addressed in the graph is how high a fee fossil carbon must pay in the absence of the ITC, to maintain the same profitability for solar owners. 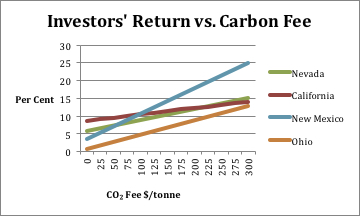 Carbon Fee Required Without ITC to Maintain Profitability, by State

Most likely any fee would be charged uniformly across the country, so that any value greater than $100/tonne would make coal-fired New Mexico more profitable for solar than other states.

The bottom line is that a carbon fee should be much higher than the $12 attained with cap and trade auctions, British Columbia’s US$27, and the initial $15 per tonne proposed by Washington’s I-732 and Citizens’ Climate Lobby.

That’s not to say that a carbon fee isn’t a good idea; indeed it’s probably the only way to make markets respond to the world’s climate crisis. But the values proposed so far are too low, and when legislation is actually considered, solar installers and owners as well as those concerned about climate should support higher carbon fees.