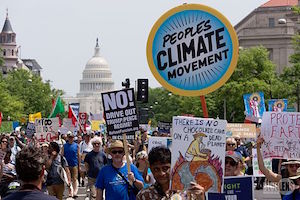 Earlier this month, California Gov. Jerry Brown drew cheers from the crowd at the Global Citizens Festival in Hamburg, Germany, when he announced he would assemble world leaders next year for a climate change summit.

“I know President Trump is trying to get out of the Paris agreement,” Brown said. “But he doesn’t speak for the rest of America… it’s up to you and it’s up to me and tens of millions of other people to get it together to roll back the forces of carbonization and join together to combat the existential threat of climate change…we in California and in states all across America believe it’s time to act.”

The Climate Action Summit will take place in San Francisco in September 2018. It is just one in a series of actions by Governor Brown to fight federal inertia with local action on climate change. Brown also recently signed Assembly Bill 398, which extends California’s greenhouse gas emission reduction program, and announced a collaboration with Chinese clean energy researchers.

Indeed, “greenlash” is leaving a mark from coast to coast, as commentator and entrepreneur Van Jones first predicted it would after the Paris Agreement withdrawal decision. With federal policy seemingly at odds with the priorities of Americans — a Yale survey found that nearly 70 percent of voters supported staying in the Paris Agreement — politicians, business leaders and donors have been galvanized in their efforts to address climate change.

Just days after President Trump decided to withdraw from the Paris Climate Agreement, former New York City Mayor Michael Bloomberg sent a letter to the United Nations, signed by more than 1,200 mayors, business executives and university presidents, expressing a commitment to the Paris Agreement goals. Not only that, but more than a dozen states have agreed to increase their emission reduction efforts since the U.S. withdrawal decision.

Further evidence of greenlash is showing up in venues around the country, including:

Earlier this year, Bloomberg reported a drop in U.S. clean energy investment in 2016. Their survey counts generation projects like solar and wind energy. In that same year, the market for advanced energy technologies reached the $200 billion mark. The broader advanced energy sector — up and down the value chain — is about much more than solar and wind, and continues to expand as efficient, low-carbon alternatives become embedded throughout our economy and society.

This economic growth may explain all of the greenlash. Trump’s Paris decision was an affront to large swaths of the economy, the people who work in them and the cities and towns that count them among their tax base.

Nothing is more American than buckling down in the face of adversity. Ironically, short of full-blown support for climate action, the best federal policy to spur the advanced energy economy may be to tell its entrepreneurs and foot soldiers that their mission is over.