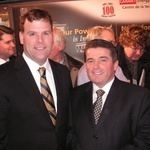 Ottawa, Canada [RenewableEnergyWorld.com] Since the election of Canada’s Conservative government in 2006, criticism of its approach to environmental protection has been fairly sustained. Its former and present environment ministers were lambasted for stalling the process at climate change conferences in Nigeria and Bali. Conservatives also cut funding for renewables put in place by the previous government, and then re-instated it with new limitations, rankling clean energy supporters.

For example, the popular Energuide energy efficiency funding for residential and commercial properties was axed, and then brought back with the requirement that the customer pay for the initial assessment. The argument has been put forth that this acts as a disincentive for the uptake of energy-efficiency audits in Canada.

The government, under pressure to develop a strong climate change plan, in the spring of 2007 introduced almost $5 billion in funding through its ecoEnergy suite of programs, to be distributed over the next four years to 2011. Funding was made available for a range of initiatives, from the development of solar hot water acceleration programs, to support for colleges and universities interested in hosting clean energy courses. However, a pattern of recent events have caused some to question the resilience of the government’s commitment to the renewable energy industries and climate change solutions.

A conference was recently held in Berlin, Germany, hosted by renewable energy expert Hermann Scheer. Representatives from numerous countries attended, including the U.S. as an observer, to plan the development of an International Renewable Energy Agency (IRENA). Canada declined the invitation to send a representative of any kind, stating to conference organizers that it did not believe a new international body for renewable energy was needed, and existing agencies should suffice.

Another example of questionable support for renewable energy has come from the tiny province of Prince Edward Island (PEI), home of the Wind Energy Institute of Canada (WEIC). This facility, in operation since 1981, has provided valuable services and data to wind industry players in both Canada and abroad. Run by the province of PEI, its profile has improved with the growth of the wind industry, and the federal government was convinced in 2005 to invest in its modernization.

In 2005, a total of CAN $5.5 million in funding to upgrade and operate the WEIC was secured, but that funding is now set to expire. The lack of a long-term funding arrangement is creating the perception in PEI and throughout the wind industry that the federal government is not a strong supporter for the Institute. In the last two weeks, Canada has announced CAN $2 million in funding for a three-year timeframe, following a petition in the national Parliament by PEI Representative, Joe McGuire. Of that CAN $2 million, $1 million will come from the Government of Canada’s Natural Resources Canada (NRCan), with the balance coming from an Atlantic development fund.

“The mixed messages sent by NRCan regarding funding has created a great deal of uncertainty for the Institute, not to mention for the people of PEI,” said McGuire. “The new funding doesn’t actually meet the Institute’s current operating costs, and it will likely have to make cuts to its programs,” he continued.

Prime Minister Harper has recently announced funding of CAN $240 million for research and development of a carbon sequestration project in Saskatchewan, which some say indicates the government’s priorities are with fossil-fuel development, not renewable energy. In April, KAIROS, an ecumenical social justice organization, released a report that indicates that the government’s subsidies to the oil & gas industry are compromising its investment in more sustainable forms of energy. The report is titled “Pumped Up: How Canada subsidizes fossil fuels at the expense of green alternatives.”

“Why does Canada spend millions of dollars on subsidizing oil and gas industries — a prime cause of climate change — and so little money on green alternatives when the majority of Canadians want action to reduce greenhouse gas emissions?” asks John Dillon, a KAIROS Program Coordinator and co-author of the report. “Unfortunately they declined to answer that question.”

Natural Resources Canada did respond to RenewableEnergyWorld.com’s request for a stated position in this article. “Our government is committed to ensuring that Canada is at the leading edge of clean energy technologies to reduce emissions and adapt to environmental change,” said a spokesperson with the Ministry.

The funding contained in the “ecoEnergy” program suite now exceeds CAN $6 billion and covers a diverse range of sectors. There is a strong emphasis on biofuel development, with around CAN $2.2 billion allocated. Renewable power subsidies total CAN $1.5 billion, with thermal heating technologies and adoption receiving CAN $36 million. CAN $40 million is available for renewable energy research & development projects, through the ecoEnergy Technology Initiative program.

From this same program, however, up to CAN $125 million is being made available for Carbon Capture & Storage research, in addition to CAN $250 million allocated for CCS in the 2008 general budget. Other projects include more miscellaneous items, like the recent release of a website for farmers seeking to integrate renewable energy into their operations. Also, version 4.0 of the popular RETScreen project evaluation software was recently released.

However, inconsistencies continue to show up. On May 8th, a Kingston, Ontario newspaper reported on the upcoming World Wind Energy Conference, June 24 to 26, at St. Lawrence College.  Delegates from about 80 countries are expected to attend. Germany is even contributing $50,000 to help make it happen.  According to the article, Canada has not offered any financial support, nor is it planning to send any significant government participants.

Volker Thomsen, co-chair of the conference and former president of St. Lawrence College, said it is both unfortunate and surprising that foreign governments are supporting a renewable energy event the Canadian federal government is ignoring.

“Early last year, we sent invitations to the Kingston conference to Prime Minister Harper, Environment Minister John Baird and Minister of Natural Resources Gary Lund,” said Thomsen. “I am still hopeful that at least one of them will change his mind and come to the conference.”

Rich in resources both renewable and non-renewable, Canada is in a position to build a renewable energy infrastructure while at the same time reducing the environmental fallout and ensuring the competitiveness of its vast hydrocarbon assets. Its current path appears to be a work in progress towards finding both economic and political balances between these related yet conflicting opportunities. How supportive of renewable energy this balancing act will be over the long term is yet to be demonstrated.