Some argued the nation would crumble under Barack Obama’s leadership, whereas it has endured the disaster left behind by the previous President and has even begun showing signs of a new flourishing. The same folks argued that passage of the health insurance reform bill would bring on utter collapse, whereas the sky remains as intact as the insurance coverage of children with pre-existing conditions. The same rabble-rousers will soon begin arguing that a climate and energy bill will break the nation and drive utility ratepayers into a budgetary corner.

The Union of Concerned Scientists (UCS) begs to differ. Basing its assessment, A Better Climate Bill; Raising Efficiency and Renewable Electricity Standards Increases Consumer Benefits, on elements of the American Clean Energy and Security (ACES) Act of 2009, the bill passed by the House of Representatives and currently being reworked by Senate committees, UCS concludes that action on climate and energy will benefit consumers and even more ambitious legislation will benefit consumers even more.

The major elements of climate and energy action considered by UCS in its analysis were contained in the House legislation: (1) A national cap on greenhouse gases (GhGs) that reduces U.S. emissions 17% below 2005 levels by 2020 and 83% below 2005 levels by 2050, and (2) a combined Energy Efficiency Resource Standard (EERS) and Renewable Electricity Standard (RES) that requires regulated utilities to obtain 20% of their power from efficiency implementations and New Energy sources by 2025.

The UCS report descrbes in detail the findings about ACES by the Energy Information Administration (EIA) of the U.S. Department of Energy. EIA showed the ACES goals are achievable and affordable. But the EIA concluded, the UCS report points out, that the ACES House bill’s combined RES/EERS will not produce significant New Energy growth over what would take place under business-as-usual (BAU) because of loopholes that compromise its goals. For this the UCS report proposes a solution. ::continue::

Using the same economic modeling system and basic assumptions as the EIA, UCS researchers revisited the question of how emissions caps, an EERS and an RES will affect consumers. They added, however, a more potent RES requiring 25% of electricity to come from New Energy sources by 2025, as well as a separate EERS requiring utilities to reduce their electricity consumption 10% through efficiency measures by 2020. By separating these standards, the compromises limiting New Energy expansion in the ACES would be eliminated. 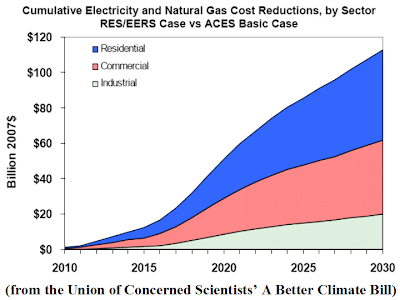 As a result of these stronger requirements, consumer electricity and natural gas spending would be cut $113 billion through 2030. This would reduce average U.S. household spending for energy by ~$100 per year in 2030. The separate and stronger standards would also drive the shift to a New Energy economy and produce enough new domestic energy sources to eliminate the need for ~50 new nuclear plants.

In a recent lighthearted interview, The Daily Show’s Jon Stewart remarked that if people are disinclined to be reasonable, they will not accept the truth of even the most obvious facts. Those who feared the advent of Barack Obama and fear-mongered about health insurance reform are unlikely to be swayed by the new UCS facts. They are here with charts and numbers, however, for those who are willing to see them.

What the facts say is simply this: It is within the reach of this nation to free itself of dependency on imported oil, stop funding both sides of the “war on terror,” shift to secure domestic energy sources, sharply stimulate the sluggish economy, create hundreds of thousands of net new good quality jobs and significantly reduce all kinds of energy-related pollution including the GhGs associated with global climate change without burdening the average U.S. household with higher utility bills.

Don’t be afraid, it’s only the truth. 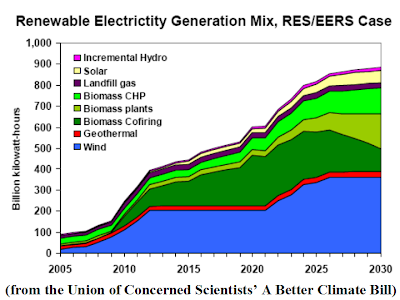 This post is based on A Better Climate Bill; Raising Efficiency and Renewable Electricity Standards Increases Consumer Benefits (February 5, 2010, Union of Concerned Scientists)