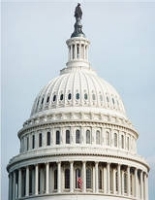 WASHINGTON, D.C. — Legislation that would unlock hydropower development at existing infrastructure around the country took a big step last week when the U.S. House Energy and Commerce Subcommittee on Energy and Power voted to advance H.R. 5892.

H.R. 5892, also known as the Hydropower Regulatory Efficiency Act, contains measures that would “facilitate the development of hydropower and conduit projects through several common-sense reforms,” including:

— Giving FERC the option to exempt hydro projects with a capacity of less than 10 MW and conduit projects with capacity between 5 and 40 MW from the permitting process; and

— Allowing FERC to extend the terms of a preliminary permit for up to two years, for a total of five years, in order to allow a permittee sufficient time to develop and file a license application.

The bipartisan bill, introduced by representatives Cathy McMorris Rodgers (R-Wash.) and Diane DeGette (D-Colo.), passed before the subcommittee on a unanimous voice vote.

The bill is one piece of a comprehensive energy solution that McMorris hopes will include an increased emphasis on hydropower.

Last week, she wrote a letter to President Obama, urging him to better utilize America’s hydroelectric potential. “While I applaud your decision to embrace an ‘all-of-the-above’ energy approach, I am disappointed your ‘all-of-the-above’ approach does not include hydropower,” McMorris writes. “According to your campaign website, the United States’ leading renewable energy source does not play a role in our nation’s energy future.

“With the potential and benefits of hydropower in mind, I respectfully urge you to reevaluate and include hydropower in your ‘all-of-the-above’ approach to energy independence.”

The bill is similar to one co-sponsored by senators Lisa Murkowski (R-Alaska) and Jeff Bingaman (D-N.M.) that passed the Senate Energy and Natural Resources Committee on a voice vote in April 2011.

The House also recently voted on the “Bureau of Reclamation Small Conduit Hydropower Development and Rural Jobs Act of 2011“, which seeks to remove certain requirements from conduit projects built on Reclamation properties.