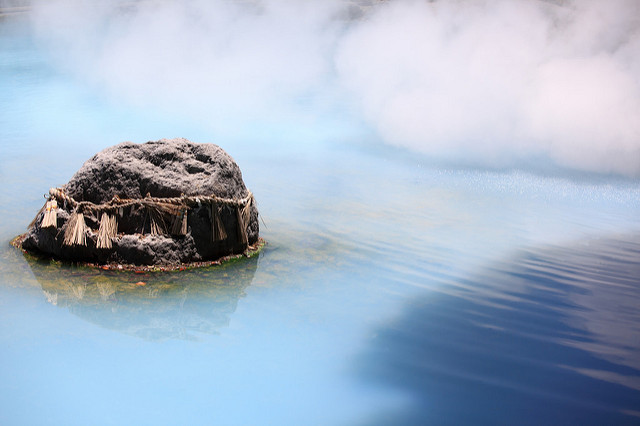 With centuries of tradition on their side, Japan’s horde of naked bathers remain unmoved by the island nation’s bid to tap a rich reserve of power equivalent to about 20 nuclear reactors.

The resource-poor country, which last year spent 18.2 trillion yen ($174 billion) importing fossil fuels, has the world’s third-largest geothermal reserves, representing an estimated 23 GW of power, according to the International Energy Agency’s geothermal division. Less than 600 MW, or about 2 percent, of that capacity is being used at the moment, according to the agency.

Japan’s hot springs, known locally as “onsen,” have been in use for more than a millennium as communal baths. Additionally, to this day, heat bubbling up from below the Earth’s surface is used in some mountain villages to boil eggs or to keep roads free of winter snow and ice.

Tapping that resource on a much larger scale remains elusive. At the end of 2015, Japan had about one-third the installed geothermal capacity of Indonesia and one-fifth the U.S., according to Bloomberg New Energy Finance data. Moreover, Japan’s geothermal capacity has been little changed since at least 2000.

Now, development of the resource is under greater scrutiny as questions arise over how Japan will meet carbon emission reductions pledged at Paris climate talks in December and as efforts to restart the country’s nuclear fleet flounder because of legal actions and public opposition.

“Of course we want to develop our resources at the speed of Turkey or Indonesia, but it is very difficult because of the problems related to hot springs and national natural parks,” Toru Saito, chief secretary of the Japan Geothermal Association, said by phone. “We are hindered because our environmental reviews take a lot of time.”

Environmental assessments and survey drilling can take as long as nine years, according to the government. After receiving environmental approval, setting up a facility can take four years.

Japan, which lies on an arc of volcanoes and fault lines surrounding the Pacific Basin known as the “Ring of Fire,” aims to more than triple its current capacity of geothermal power by 2030. But according to hot spring owners, some of whom have had onsen in their family for generations, geothermal threatens to destroy their livelihoods.

“We strongly oppose geothermal development,” said Toru Terada, the senior managing director of the Japan Spa Association, which represents 1,200 members. “Geothermal plants can lower the temperature of the springs, as well as deplete volume. We can’t support the government’s plan to loosen regulations in order to expand facilities.”

Hot springs are big business in Japan. More than 120 million people stay overnight at such resorts annually, while millions go for day trips, according to the association.

“Undoubtedly the onsen has impeded” development of geothermal, Greg Bignall, head of the geothermal department at New Zealand-based GNS Science, said by phone. “They can point historically in Japan and around the world where developments have negatively impacted the hot springs.”

The government and developers should address hot spring owners’ concerns by showing examples of areas that have been developed without damage and by explaining advancements in current methodologies and technologies, according to Bignall.

In October, the government relaxed rules protecting onsen and natural parks, expanding the area that can be drilled. The government still doesn’t allow for drilling in so-called “special protection areas.”

About 80 percent of Japan’s geothermal resources lie on onsen or nature reserves, according to Japan’s Ministry of Economy, Trade and Industry.

“One of the leading impediments to the development of geothermal is that when surveying and drilling needed to occur inside natural parks, the Ministry of Environment wouldn’t grant approval,” Toshiyuki Tosha, a professor at Kumamoto University and geothermal development adviser for the Japanese government, said by e-mail. “With the new rules from October, we are getting to a situation where we can drill more in natural parks.”

Before the Fukushima Dai-Ichi nuclear accident in 2011, Japan picked nuclear power as its low-cost green power source of choice, going so far as to forecast that the nation would derive more than 50 percent of its electricity needs from atomic plants by 2030. With nuclear now largely idled, Japan is struggling to find a way to power its cities and factories while also meeting its emissions goals and climate commitments.

Geothermal has seen little benefit from an incentive program introduced in 2012 to encourage more clean-energy development, accounting for less than 0.1 percent of the roughly 86 GW of clean energy projects approved so far by the government. Japan’s total electricity capacity last year was 230 GW, according to BNEF.

While hot spring owners oppose development of geothermal resources over concerns it could lower the temperature of water they use in their spas, the country’s Geothermal Research Society says tapping the energy source could cut Japan’s CO2 emissions by 54.7 million tons a year.

“Geothermal is a perfect baseload contributor,” GNS Science’s Bignall said. “You can do a lot with geothermal and a lot with natural resources — probably more than what people are doing already.”