A surprising number of new products are available for the hydroelectric power market. This article contains information on the unique features of just a few of those.

Products are continually being developed for the hydroelectric power industry that hopefully can be used to help you do your job better, faster or more efficiently. This article highlights some of the new products and technology on the market, as well as their key features, broken down into three categories.

Many of the companies supplying these products will be exhibiting at HydroVision International 2014 in Nashville, Tenn., in July. So if what you learn below entices you and you want to know more, it’s a great opportunity to stop by the company’s booth and get a hands-on demo.

Dam safety and structural soundness is an important element of successful operation of a hydro powerhouse. The below tools can be used to determine the condition of a dam or ensure its continued reliability.

A new remotely operated vehicle (ROV) from ASI-Marine Technology of Ontario, Canada, is capable of giving a comprehensive view of partially-flooded tunnels or pipelines. 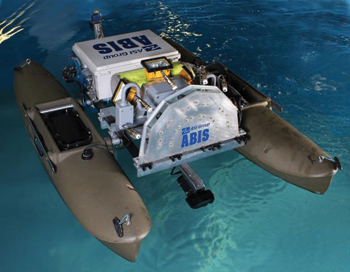 Called the “Above & Below Inspection System” or “ABIS,” this new ROV uses top-side data with laser scanning (LIDAR) while simultaneously inspecting surfaces below the waterline with profiling and imaging sonar, the company says. Data gathered is then processed to provide a comprehensive three-dimensional view.

Additionally, ABIS is capable of providing high-definition video footage, digital photographs of the above-water portions, and environmental data markers (such as temperature). The system is modular, allowing for a certain degree of customization specific to the client’s needs, ASI-Marine says.

The company says the ABIS vehicle would be of particular use by hydropower project operators looking to inspect tunnels without taking their plants off line.

Two of the largest jet flow gate-type valves ever built were recently installed at a dam in Taiwan that impounds water for a 50-MW hydroelectric powerhouse. Manufacturer DeZURIK/APCO/Hilton will be showcasing this and its other valve style technology at HydroVision International. 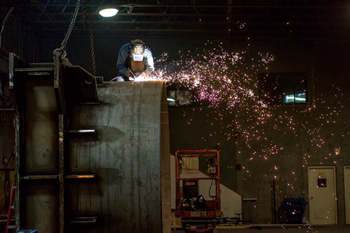 For the application in Taiwan, the company completed two of the largest jet flow gate-type valves ever built in the U.S. These valves have a 77-inch port diameter and measure 31 feet tall and 10 feet wide. Total assembled weight for each valve was 75,000 pounds.

These valves will be used for throttling service on the Zengwun River Dam in southern Taiwan. The dam impounds water for Taiwan’s largest reservoir and supports local irrigation, municipal water service and generation at a 50-MW hydroelectric power station.

The company is headquartered in Sartell, Minn., and provides valves in the industrial and municipal markets. DeZURIK/APCO/Hilton will be exhibiting this and other products at Hydro-Vision International in booth 1333. 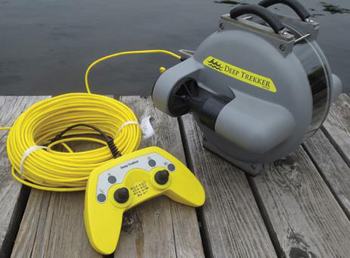 The ROV unit – called the DTG2 – has strong capabilities in inspections, surveying and security, the company says. DTG2 is a fully self-contained unit with onboard rechargeable batteries, Deep Trekker said, that is capable of deploying in less than 30 seconds. The unit has a run time of six to eight hours. It comes with 256 feet of tether, a tether reel, carrying case and screen controller.

A 700HD line color camera rotates from the center of the ROV to take advantage of the 360-degree center window, giving the operator a 270-degree vertical field of view. A vertical pitch system allows for exceptional maneuverability, the company says. The unit weighs less than 19 pounds and may be lowered into the water by the tether over the side of a boat or even from a very high vantage point, such as a bridge.

For more information about this product, visit Deep Trekker at HydroVision booth 1042.

The sensor signals absolute positioning, rather than position relative to the starting location of the rod. Intellinder features health monitoring to detect and diagnose potential sensor malfunctions.

Replacing the sensor does not require removing the cylinder from service, Parker Hannifin says. The unit can operate from -40 to 220 degrees Fahrenheit and is universal across a wide range of cylinder bore and rod diameters, with stroke lengths up to 27 feet. Redundancy can be obtained by adding sensors.

The sensor comes standard with J1939 CAN communication, which communicates with signal conditioning electronics via a long cable run up to 131 feet. Up to eight Intellinder cylinders can be connected to a single bus. The next generation will offer analog signals directly out of the sensor, Parker Hannifin says.

Parker Hannifin will be exhibiting this and other products at HydroVision International in booth 1001.

Innovations to the equipment installed in a hydro powerhouse are important, as they allow these valuable assets to continue operating reliably for decades.

A.W. Chesterton Co. introduces a new product designed to combine “superior seal performance” with the ease of installation of a cartridge split seal. Called the Chesterton 442C, the new split seal is based on the design of its 442 platform. 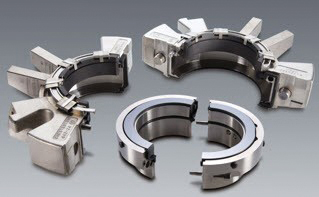 “The 442C uses an interlocking face design with a unique holder that self-aligns the face halves in the rotating assembly,” A.W. Chesterton says. “This ensures proper face alignment, which is critical to sealing success. Springs energize after installation, allowing for maximum space between seal faces during installation.”

The seals have been used on pumps and other rotating equipment with shaft sizes ranging from 1 inch to 30 inches, the company says.

A.W. Chesterton will be exhibiting at HydroVision International in booth 417.

The ATS-63 integrated turbine/generator will soon be available for low-head applications. The technology, developed by Amjet Turbine Systems, comes in unit sizes ranging from 100 kW to 2.5 MW. It works for 5 to 42 feet of head and 310 to 925 cubic feet per second of flow. Multiple units can be placed in series or parallel for higher heads and larger flow rates, Amjet says. Applications for this equipment include vertical or horizontal shaft orientation, submerged bypass dam or canal drop, bulkhead placement, siphon over existing dam, in-line in a conduit, multiple unit installation in a moving bulkhead, new installations or retrofits. 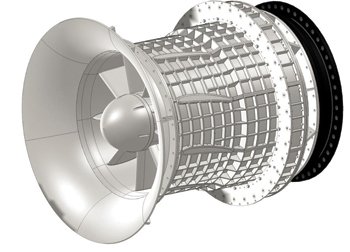 This turbine and generator integrated into one unit is built using advanced composite materials and manufacturing techniques, making the weight one-fifth of current technologies, the company says. In addition, the units require far less civil construction. They feature a variable-speed power electronics drive, meaning no mechanical blade pitch controls or wicket gates, and the only moving part is the turbine blades.

ATS-63 is in development for orders in mid-2015. Learn more at HydroVision International, booth 343.

The company said it “can supply virtually any kind of seal for any application and in any quantity, dimension, and profile,” with its products manufactured from a proprietary self-lubricated cast polyurethane material blend. The products offer up to four times the service life of conventional materials, according to SKF, with other material options available for specific applications.

SKF can deliver one-piece designs for seals up to 4,000 mm in diameter, or spliced designs using a welding technique for those greater than 10,000 mm in diameter. Designs range from flexible and compact radial lip seals to chevron and loaded cap seals.

SKF will be exhibiting its products at HydroVision International in booth 738.

Gathering of data related to a hydroelectric plant and dam is an ongoing process. Below are some new tools that may help simplify or automate this work.

Dimetix offers FLS-C laser sensors that can be used for a variety of applications, including measuring the distance to the top of the flood gates at a dam.

A recent application involved using 20 of the sensors for this measurement. The ability to reliably and accurately monitor flood gate height at often remote and difficult-to-access locations remains an ongoing challenge for hydropower and reservoir flood gate operators, the company says. 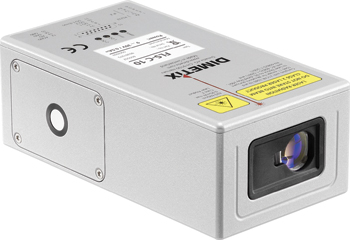 Flood gate height is tied directly into the reservoir’s monitoring system to display position while the gates are raised or lowered. A Dimetix laser, housed in a stainless steel enclosure, measures through a hole bored into the top of the dam to the black steel surface of the flood gate 50 feet below.

In instances where direct measurement is not possible, indirect measurement of a mechanical part that moves in unison with the gate (such as a positioning arm or gate screw) can be used as a reference for gate position.

The Dimetix laser distance sensors operate on a principle called phase shift. The laser signal is reflected directly back to the device. This technique is less expensive than traditional laser triangulation methods and is generally more accurate than simple time of flight methods, the company says. The device is capable of measuring with 1.5 mm accuracy, even up to 500 meters.

For more on this device, visit Dimetix at booth 1529 at HydroVision International.

A new bathymetry system from EdgeTech allowed the company to map Canada’s St. John’s Harbor in less than three hours. 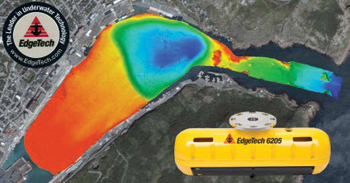 The mapping, conducted in a record three hours, according to the Massachusetts-based company, was performed during a demonstration that coincided with the Canadian Hydrographic Association’s annual conference.

EdgeTech said its new 6205 system was able to map the harbor and the narrows leading into it by using co-registered bathymetry and side-scan sonar data.

EdgeTech’s 6205 has advantages over traditional multi-beam systems, as its transducer array configuration and signal processing techniques limit nadir gap and latency issues associated with many other technologies, the company said.

The 6205 is also available in an automated underwater vehicle version, called the EdgeTech 2205.

The low-power, zero-maintenance units have applications within the hydroelectric power industry, as they can be used for monitoring in remote locations susceptible to flooding and high humidity. They can be used to record water level, pressure and temperature and are available in four pressure ranges, from 30 psia to 500 psia.

They can be used for crest stage gaging, stream gaging, flood and storm surge monitoring, construction site dewatering and much more. The logger has a variety of logging modes and integrates with telemetry systems, radios, samplers and widely-used data management software, including In-Situ’s own EQuIS suite.