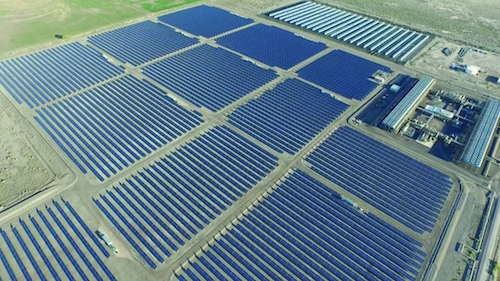 Engineers at the U.S. Department of Energy’s Idaho National Laboratory and National Renewable Energy Laboratory are helping analyze the integration of the geothermal plant with the newer additions. 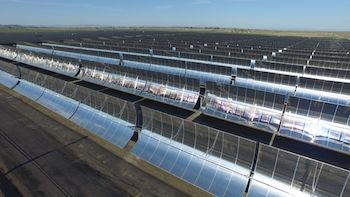 Image: The first of its kind hybrid technology at the Stillwater plant creates increased power generation during the day, allowing for maximum production efficiency when demand is the highest. Credit: Enel Green Power North America, Inc.

A quick primer: The geothermal module of the Stillwater plant pumps up geothermal brine — scalding hot water found deep underground — where its heat is transferred to a second fluid, isobutane, which flash-boils and spins turbines as it expands. Having imparted its heat energy, the brine is returned into the earth while the isobutane is cooled and condensed back into a liquid for another cycle.

Because the Stillwater plant relies on ambient air to cool and condense the isobutane, its cooling system struggles to shed excess heat on hot days, degrading the plant’s performance as a result. Unable to turn down the thermostat on the ambient air, engineers turned up the temperature of the incoming geothermal brine using a technology called concentrating solar power, or CSP.

“NREL has CSP analysis and characterization capabilities, and INL has geothermal power plant simulation and optimization expertise,” said Dan Wendt, the INL engineer who led the project’s analysis. “It was the ideal mix of resources and skills necessary for the analysis.” 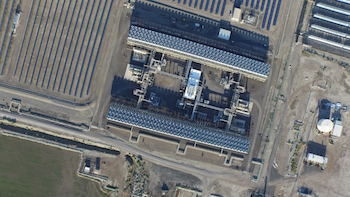 The concept behind CSP is simple: rows of parabolic mirrors focus the sun’s rays onto tubes of demineralized water. Heat from this water is transferred to incoming geothermal brine, increasing the amount of energy available to boil the isobutane, resulting in more power to spin the electricity-producing turbines. And it works: between the months of March and December 2015, the CSP component increased the amount of overall output by 3.6 percent, on average.

“It can often be difficult to obtain commercial power plant operating data for model validation purposes,” said Wendt, “but the partnership gave us the chance to analyze detailed operating data from a state-of-the-art power plant with a unique configuration.”

This article was originally published by the U.S. Department of Energy/ Idaho National Laboratory in the public domain.