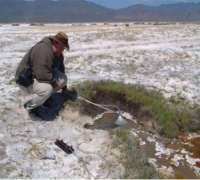 Berkeley, California [RenewableEnergyAccess.com] In a survey of the northern Basin and Range province of the western United States, geochemists Mack Kennedy of the Department of Energy’s Lawrence Berkeley National Laboratory and Matthijs van Soest of Arizona State University have discovered a new tool for identifying potential geothermal energy resources with no drilling required.

Currently, most developed geothermal energy comes from regions of volcanic activity, such as The Geysers in Northern California. The potential resources identified by Kennedy and van Soest arise not from volcanism but from the flow of surface fluids through deep fractures that penetrate the earth’s lower crust, in regions far from current or recent volcanic activity.

“A good geothermal energy source has three basic requirements: a high thermal gradient — which means accessible hot rock — plus a rechargeable reservoir fluid, usually water, and finally, deep permeable pathways for the fluid to circulate through the hot rock,” says Kennedy, a staff scientist in Berkeley Lab’s Earth Sciences Division. “We believe we have found a way to map and quantify zones of permeability deep in the lower crust that result not from volcanic activity but from tectonic activity, the movement of pieces of the Earth’s crust.”

Kennedy and van Soest made their discovery by comparing the ratios of helium isotopes in samples gathered from wells, surface springs, and vents across the northern Basin and Range. Helium-three, whose nucleus has just one neutron, is made only in stars, and Earth’s mantle retains a high proportion of primordial helium-three (compared to the minuscule amount found in air) left over from the formation of the solar system. Earth’s crust, on the other hand, is rich in radioactive elements like uranium and thorium that decay by emitting alpha particles, which are helium-four nuclei. Thus a high ratio of helium-three to helium-four in a fluid sample indicates that much of the fluid came from the mantle.

The geology of the region was the clue. The Basin and Range is characterized by mountain ranges that mostly run north and south, separated by broad, relatively flat-floored valleys (basins), which are blocks of crust that have sunk and become filled with sediment eroded from the uplifted mountains. The alternating basin and range topography is the result of crustal spreading by east to west extension, which has occurred over approximately 30 million years. The Earth’s crust in the Basin and Range is some of the thinnest in the world, resulting in unusually high thermal gradients.

The faces of mountain blocks in the Basin and Range clearly exhibit the normal faults that result as the blocks are pulled apart by the extension of the crust. Normal faults form high-angle pathways deep down into the brittle upper crust. But as the fault plane approaches the ductile lower crust, changes in the density and viscosity of the rock refract the principle stress acting on the fault, deflecting the fault plane, which becomes more horizontal. It is from these deep, horizontally-trending faults that Kennedy thinks permeable passageways may emanate, penetrating the ductile boundary into the mantle.

One of the most seismically active areas in the Basin and Range occurs in what is called the central Nevada seismic belt. The researchers’ detailed studies in this area, notably at the Dixie Valley thermal system next to the Stillwater range, established that the highest helium ratios were restricted to fluids emerging from the Stillwater range-front fault system.

The northern Basin and Range, which Kennedy and van Soest surveyed on behalf of the DOE’s Office of Basic Energy Sciences and Office of Geothermal Technologies, includes parts of California, Nevada, Oregon, Idaho, and Utah. In their survey the researchers mapped the steady progression from low helium ratios in the east to high ratios in the west. The distribution of the increasing ratios corresponds remarkably with an increase in the rate and a change in the direction of crustal extension, which shifts from an east to west trend across the Basin and Range to a northwest trend.

This change in rate and direction reflects the added shear strain induced by the northward movement of the Pacific Plate past the North American Plate. Kennedy and van Soest believe that the added component of shear strain and increasing extension rate tear open fluid pathways through the ductile lower crust, into the mantle. The high helium isotope ratios they found, indicating potential new sources of geothermal energy, were superimposed upon the general background trend: anomalously high ratios map zones of higher than average permeability.

“We have never seen such a clear correlation of surface geochemical signals with tectonic activity, nor have we ever been able to quantify deep permeability from surface measurements of any kind,” says Kennedy. The samples they collected on the surface gave the researchers a window into the structure of the rocks far below, with no need to drill.

With the urgent need to find energy sources that are renewable and don’t emit greenhouse gases, geothermal energy is ideal — “the best renewable energy source besides the sun,” Kennedy says. Accessible geothermal energy in the United States, excluding Alaska and Hawaii, has been estimated at 9 x 1016 (90 quadrillion) kilowatt-hours, 3,000 times more than the country’s total annual energy consumption. Determining helium ratios from surface measurements is a practical way to locate some of the most promising new resources.