More
Home Baseload Harnessing the Power of the Tides

Tidal power remains one of the great engineering challenges yet to be fully exploited in the modern world and yet it was first mooted more than a century ago. The oceans hold enormous quantities of potential energy that can be developed with very low greenhouse gas emissions.

There are three main types of energy that can be captured from the oceans: wave, tidal stream, and tidal range.  Wave energy holds significant global potential but is the most challenging in engineering terms. Tidal stream and tidal range rely on high tidal currents and tidal range respectively and their potential is limited by the availability of suitable sites.  Nonetheless, in the U.K. alone, there is some 15-20 GW of tidal energy that could be captured. Other global tidal power hotspots include the U.S., Canada, France, Russia, and Korea.

Tidal range is the most mature tidal technology.  Essentially it uses modified hydropower turbines and significant civil engineering works to impound a body of water and generate power using the head difference created as the tide ebbs and floods.  France led the way with tidal range development back in the 1960s and La Rance (near Saint-Malo in Brittany) was the world’s first project of this kind.  Until 2011, the 240-MW La Rance project was the largest tidal power plant in the world. Some 45 years later, the original turbines are still in use and the plant is one of the cheapest forms of power generation on the EDF Energy network.  Since then, tidal range power development has progressed somewhat erratically.  The U.K. has studied many sites, in particular the Severn Estuary (see Figure 1).  Parsons Brinckerhoff led the consulting consortium undertaking the Severn Tidal Power Feasibility Study in 2008 – 2010 and also acted as technical advisor for the SETS programme looking at embryonic technologies that could be suitable for deployment in the Severn and elsewhere.

The Canadians (at the Bay of Fundy) and the Russians have built smaller pilot plants, but it wasn’t until South Korea moved forward with its 254-MW Sihwa plant in the last decade that a modern commercial-scale tidal range project was developed.

Power can be generated only on the ebb tide or on both ebb and flood tides and can be augmented by adding sluicing and pumping variances to further increase generation heads.

The power generated from a tidal range turbine is calculated in the same way as a hydropower plant with the power produced being directly related to the head of water and the flow through the turbine.  The power, at any point in time, is dependent upon the depth / storage relationship of the impounded basin, the difference in level between the impounded basin and the natural tide, the corresponding head and flow, and the efficiency of the turbine at that head and flow.

Normally a simple 0-D (flat basin) or 1-D (a long section through the basin) hydrodynamic model is used to take a first estimate of the power yield likely from a site, but as tidal range sites exist in dynamic estuaries where water profiles vary longitudinally and horizontally, accurate estimates require a 2-D hydrodynamic model that simulates the effects on the water profile horizontally and longitudinally.  3-D modelling is now also possible where currents are modelled at different depths rather than averaged.  Figure 2 shows how energy generation changes the natural tidal cycle within the impounded basin.

Such changes in the natural tidal regime require serious consideration and the 2-D and 3-D models are used to assess the environmental and geomorphological effects that will result as a consequence of developing tidal range projects in an estuary.  As will be obvious from the above, tidal range feasibility studies can become quite complex with long development cycles.  However, intelligently executed tidal range projects can be a sustainable form of predictable low-carbon generation with the potential to reduce the cost of electricity over time. 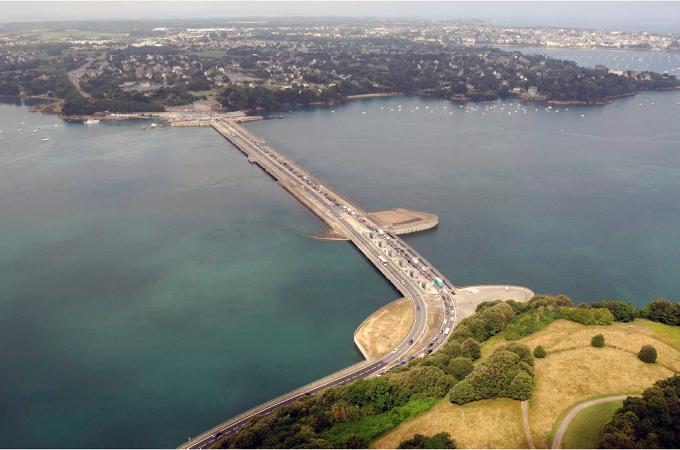 Tidal range turbines are large and have to be housed in even larger concrete structures.  A 40-MW bulb turbine would typically have a rotor diameter of about 8m, rotating at around 60rpm (revolutions per minute).  They also require substantial civil engineering works to form the impounding basin.  Figures 3 (above) and 4 (below) show the La Rance tidal barrage and a computer generated image of a tidal lagoon respectively. 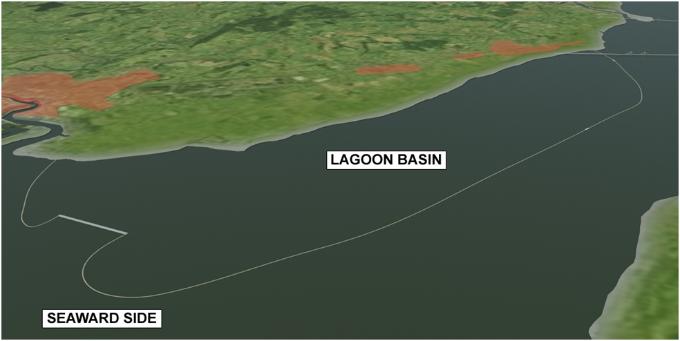 Tidal stream technologies differ from tidal range in that they exploit the tidal currents rather than the tidal range. They have emerged over the last fifteen years and, in the simplest terms, can be described as an evolution of the wind turbine, adapted to operate in the more challenging environment where the fluid density is an order of magnitude greater, and suitable locations in terms of depth and current are more challenging to find.

Tidal currents of 2.5m/s (metres per second) or more are required to generate power efficiently.

Tidal stream turbines have a much lower power density than conventional tidal range turbines and the power calculation is also quite different, being related to the swept area of the turbine blades and the cube of the current flowing through the turbine. As power is proportional to the cube of the current, tidal stream sites require significant currents to generate power economically. The greater the current, the smaller the rotor diameter for a given power output.  However, rotors for relatively small tidal stream devices can be 12 to 20m in diameter, rotating at around 15rpm.  The largest tidal stream device currently being developed is 1.5 MW.  This illustrates two of the main engineering challenges with tidal stream turbines – the structural design of large diameter turbine blades and placing of turbines and cables in fast flowing waters.

Tidal stream devices can be deployed singly (e.g., at Strangford Lough in Northern Ireland), in arrays (as proposed for two sites in the UK), or as a fence (as was proposed for the SETS programme in the UK).  An array is comprised of a number of turbines co-located in a grid, whereas a fence is comprised of a number of turbines set out in a single line across an estuary. 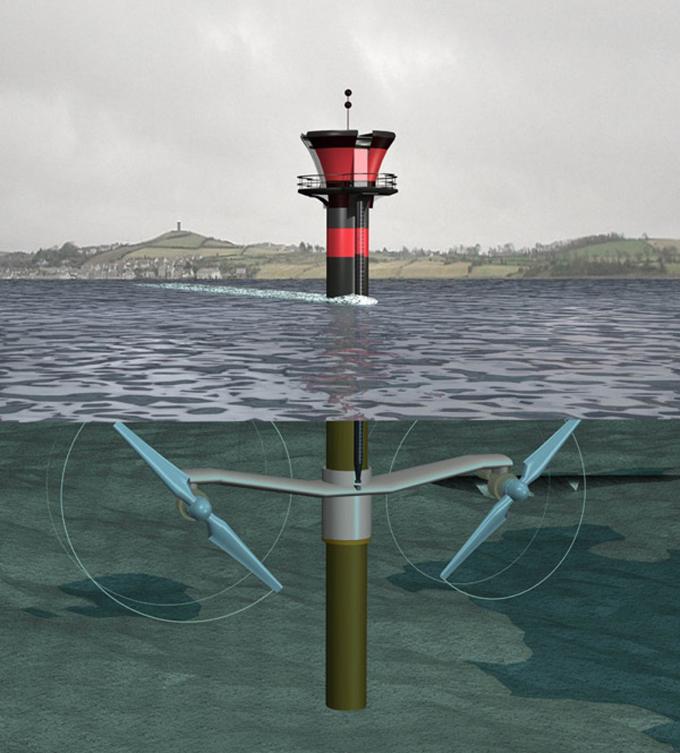 One of the largest tidal ranges in the world occurs in the Severn Estuary bordering South West England and Wales (see Figure 1 above).  At its highest point, near Bristol, the tidal range is 14.4m, or over 47ft.

In 2006, the government reviewed its energy policy and, with the enactment of climate change legislation that committed the U.K. to an 80 percent reduction in carbon emissions by 2050, commissioned new studies on low carbon generation, including tidal power. The initial studies were undertaken by the government’s Sustainable Development Commission, which recommended that further, more detailed studies should be undertaken on the Severn.

Following an invitation to submit proposals, a consortium led by Parsons Brinckerhoff was appointed to lead the two-year study, and a long list of over 10 potential “significant” options were evaluated before reducing this to a shortlist of five, three barrages and two lagoons.  “Significant” in this context meant large – typically more than 1 GW of installed capacity.  However, the study concluded that the size of the five feasible options was directly related to the adverse environmental impacts, particularly for the barrages.  One of the land-connected lagoons, Bridgwater Bay (L3d in Figure 1), however, came out of the study with some significant benefits in terms of reduced impacts on navigation and with potentially acceptable environmental impacts.

Completion of the study in 2010 encouraged a fresh look at the evidence base that had been created to identify what opportunities should be followed up, if any.  The Bridgwater Bay lagoon was an obvious starting point but had a capital cost of more than £10 billion [US $16.7 billion], which was not particularly attractive in those days shortly after the credit crunch.

The focus changed instead to smaller tidal lagoons, with better ground conditions and more innovative impoundment designs, so that the potential of lagoons could be demonstrated.  Parsons Brinckerhoff’s concept was that a series of smaller tidal lagoons could form the basis of an incremental approach, whereby the first lagoon is built, and experience gained from the first is then used to build a second, and so on.

Parsons Brinckerhoff, assisted by Black & Veatch, worked up a conceptual design for what has been called the Stepping Stones Tidal Lagoon (the semi-circular lagoon in Figure 1).  This was, at £1.7 billion [US $2.85 billion] capable of being developed by the private sector.  It had a rated power output of 600 MW and an annual energy yield of 1.2 TWh/yr (terawatt-hours per year) with a lower cost of energy than the previously favored barrage proposals.  In addition, tidal lagoons had a bigger advantage, namely, they did not interrupt the main navigation routes and environmental impacts were largely confined to the area within the impounded basin. As such they don’t require extensive navigation or environmental mitigation measures.

At the same time, Regen SW, the regional energy advisory organization, along with the newly created South West Marine Energy Park (a government initiative to focus marine energy resources within a geographical region) published a balanced technology approach for the Severn Estuary that promoted the concept that different technologies could be deployed collaboratively with both existing and emerging technologies, at appropriate scale, offering a more sustainable approach than one single mega-project. It was a simple matter to integrate Parsons Brinckerhoff’s incremental approach, based on tidal lagoons, with the balanced technology approach and its mix of technologies to produce a single best-practice approach, with practical project examples and consideration of how a phased development could use both existing technology today whilst still allowing scope for emerging technologies to be used in the future.

Both the UK government and the select committee on energy and climate change endorsed the balanced technology approach in early 2013.  Many environmental and commercial stakeholders have also endorsed it as a more sustainable and appropriate approach than a large barrage.

Even though to date no technology has been ruled out on the Severn, including a large barrage; nonetheless, Parsons Brinckerhoff’s role in searching for a more sustainable alternative, exemplified by the Stepping Stones Lagoon, informed by its work on the Severn Tidal Power Feasibility Study and the associated SETS program, has been helpful in informing stakeholder perspectives. Working with the South West Marine Energy Park, the company has also been active in assisting local authorities and stakeholders in planning how energy from the Severn could be successfully developed in an environmentally sustainable and economically beneficial way.

Although the Severn is one of the largest tidal energy resources in the world, there are also many others that are being investigated to see how and when tidal energy may be generated.  For such a nascent industry, there are many organizations, large and small and including Parsons Brinckerhoff, taking a keen interest in marine energy in parts of the U.K., France, Canada, the U.S., and Korea, to name but a few.  The stakeholder engagement model being used on the Severn to develop a transparent, incremental, and evidence-led approach could and should be applied to other potential marine energy development zones around the world.

With many countries actively seeking to reduce carbon emissions from their energy use, the coming decades are likely to see a significant increase in the amount of marine energy being used worldwide.

The author would like to thank the many stakeholders of the South West Marine Energy Park who have worked collaboratively to promote the benefits and challenges of marine energy, as well as those colleagues at Parsons Brinckerhoff who have worked on the various tidal energy studies undertaken in the UK in recent years.