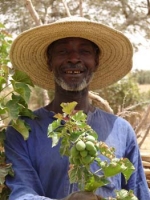 The rising cost of foreign oil has governments and researchers around the world searching for cheaper and more sustainable forms of energy. In Haiti, the hope is centered on a native plant called jatropha curcas, which bears oily seeds that can be crushed and processed to produce diesel fuel for generators or vehicles.

The hardy shrub grows in a variety of climates, and already has helped launch biodiesel programs in India, Mali, Indonesia and other regions.

Kathleen Robbins, who has been promoting non-profit development programs in Haiti, says jatropha could work in the Caribbean nation, where two thirds of the population relies on farming.

“It [jatropha] has the potential, because it can be grown virtually anywhere, of creating a really positive economic impact in rural Haiti,” said Robbins.

Robbins says jatropha could provide a cheap source of fuel for rural areas that are cut off from the nation’s electricity grid. And she says, with a hectare of jatropha seeds selling for about $600, it could become an important new cash crop.

“Six hundred dollars a hectare could make a huge difference on a country where a lot of people are living on a dollar or less a day,” said Robbins.

Jatropha also provides a unique opportunity for Haiti, where soaring demand for charcoal from timber has lead to deforestation of much of the nation’s hilly terrain. Advocates of jatropha say it can thrive in the denuded land, and its small branches cannot be used for charcoal.

The challenge now is convincing farmers of the promise of jatropha, when planting the seed oil crop could mean displacing traditional food crops that are the main source of cash for many peasants.

Georges Valme, a Haitian-born American, thinks farmers should not have to make that choice. With a small personal investment, Valme has been helping to build nurseries in Haiti to produce thousands of jatropha seedlings as well as avocado, tomato and other food crops. Valme says farmers will need to plant both in their fields, because jatropha seedlings will not mature for at least three years.

“While I am waiting for that jatropha to start giving seeds, I will start making money,” said Valme. “I will have a structure, I will have people that are trained, they will know what to do.”

The promise of jatropha in Haiti is drawing the attention of Brazil, which has emerged as a world leader in biofuels thanks to its sugar-based ethanol program for automobiles. Last week, a representative of Brazilian jatropha growers met Haitian businessmen in Port-au-Prince and agreed to fund a pilot jatropha program near the capital.

Johanna Mendelson Forman, a senior associate at the Center for Strategic and International Studies in Washington, says Brazil’s expertise in biofuels is crucial to the future of the Haitian program.

“What’s exciting about the relationship with Brazil is that we go beyond just appropriate technology to more sophisticated production standards,” said Forman. “And the Brazilians are already moving toward standards for automobile and diesel engine use.”

Forman says the jatropha partnership is one of the first programs to take shape under an agreement that Brazil and the United States signed in March to promote alternative energy efforts in the Caribbean and Central America. President Bush has said the deal aims to help partner nations reduce their dependence on foreign oil and develop domestic sources of energy.

For Haiti, the quest for domestic sources of renewable fuel already is part of the nation’s history. But Georges Valme says Haitians must learn with jatropha not to make the same mistakes they did with charcoal, which led to deforestation.

“Haiti has been living on renewable energy for the past 500 years,” said Valme. “This is nothing new. It is just they don’t know how to hold [control] it.”

Valme says jatropha alone may not reverse decades of damage to Haiti’s land, but he is confident that it can bring economic and environmental benefits to thousands of residents.