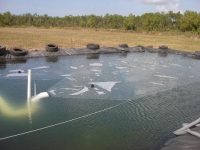 Orlando, Florida — A typical day in Orlando, Florida is hot, humid, and sunny – the perfect environment to grow some algae. On Monday afternoon, Power-Gen and Renewable Energy World attendees headed to the Culture Fuels site to learn about their algal biomass technology. According to Mike Welch, research associate in Biofuels at University of South Florida’s Patel College of Global Sustainability, the company hopes to scale-up its technology so that it can economically and efficiently produce algal biodiesel. And since algae need plenty of carbon dioxide (CO2) to thrive, Welch believes algae can work hand-in-hand with fossil fuel generation to help offset emissions. 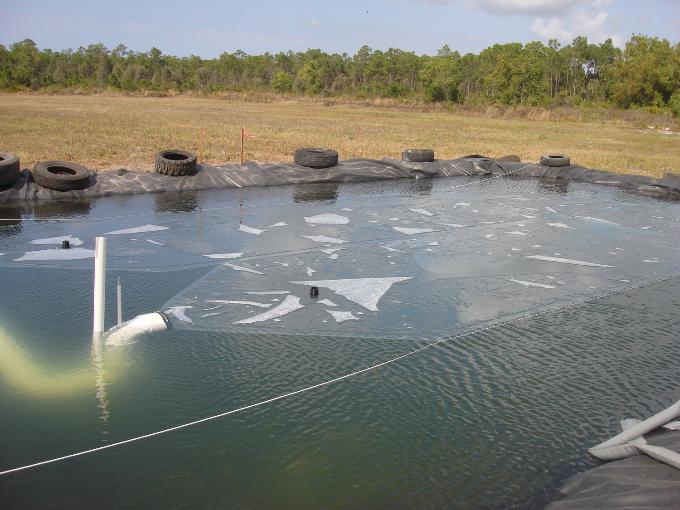 Algae is typically grown in either open pond or enclosed photo bioreactors. Each method has its own set of advantages and drawbacks – open ponds run the risk of contamination from bacteria that can kill the algae, while closed systems can be expensive. Culture Fuels believes they have found a happy medium with its FloatAlgae system.

Algae, water and new media (a mix of compounds to support growth) are inserted into a clear “bag” that floats in a pool of water. CO2 is pumped into the bag and a turbine spins to keep the fluid moving.  Since it is a closed system, there is much less risk for contamination, and the clear bag allows for plenty of sunlight for rapid algae growth.

Every 11 days, the algae are ready to be harvested. About 60 percent of the bag is taken out and its oil can then be extracted for fuel. The bag is then refilled with new media to restart the growing process. According to Welch, an acre of FloatAlgae will produce 2,000 gallons of fuel – an improvement over average ethanol production, which typically amounts to 600-700 gallons per acre.

Culture Fuels recently partnered with the University of South Florida (USF) and secured a two-year grant from the state of Florida. It hopes to scale up production to one acre by the end of the grant period. Culture Fuels has laid out a production plan, which consists of growing its technology by entering different markets until it can scale enough to reach the biofuels arena. “Our plan is to gradually enter new markets as we scale our technology. We will start with fish farming, move on to pharmaceuticals, and then we’ll be able to viably enter the fuels market,” said Welch.

When they get to fuels, Welch says its technology would thrive next to carbon-heavy coal or natural gas plants. And though some in the renewables industry state that this technology doesn’t help to replace fossils with clean energy, said Welch, realistically, “coal is going to be around for a while, so we should use whatever resources we can to produce clean fuels and potentially help offset carbon at the same time.”