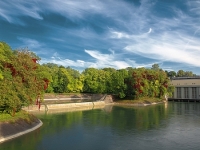 Kansas, United States The Bowersock Mills & Power Co. has broken ground on a 4.6-MW expansion that will nearly triple capacity at the Bowersock hydropower project.

This run-of-river hydro project, on the Kansas River in Lawrence, Kan., began generating electricity for the city of Lawrence in 1905. The dam itself was completed in 1974 to provide water for a milling operation. The south powerhouse contains seven turbine-generating units with a total capacity of 2.35 MW. Bowersock Mills & Power was founded by Justin DeWitt Bowersock, and his descendants run it today.

More than 150 people attended the groundbreaking, including Kansas Governor Sam Brownback and Aron Cromwell, mayor of Lawrence. During his address, Brownback emphasized that he has called on Kansas to be the renewable power state and discussed how the Bowersock expansion contributes to this goal. He also stressed the importance of a partnership approach to new development. “It is critical that we work together – the development community, environmental community, the energy community. That Kansas partnership is what produced this,” he said.

The new north powerhouse, across the river from the existing powerhouse, will replace the existing spillway. The powerhouse will contain four turbine-generator units. Two of the units were acquired from a developer in Georgia who was unable to use them for his project, and the other two are being imported from China.

As part of this work, Bowersock Mills & Power will increase the height of the flashboards across the top of the dam by 1.5 feet, increasing head available for the project.

The new powerhouse is scheduled to begin operating in December 2012.

The Kansas City Board of Public Utilities will purchase and distribute the electricity from the new powerhouse under the terms of a 25-year power purchase agreement. Don L. Gray, general manager of the Kansas City BPU, said at the groundbreaking that the power purchased from this project will put the BPU over the Kansas renewable portfolio standard of 15 percent by 2016.

This work represents an investment of about $25 million. Nearly all of the financing for the project is related to the American Recovery and Reinvestment Act. Bowersock Mills & Power issued bonds that were made available through the act. The bonds made the project more feasible through tax advantages available to renewable energy producers. The project also will benefit from a 1603 grant, which is a grant through the Treasury Department that is equivalent to the investment tax credit or production tax credit.