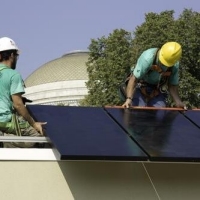 Washington, D.C. United States [RenewableEnergyWorld.com] Americans have been given a respite from the constant dribble of bad news. And so have the country’s entrepreneurs. As the nation’s gross domestic product is stabilizing, investment in start-ups is considerably picking up.

It’s due in part to more optimism about what the future holds. It’s also because of the massive government stimulus plan passed early this year. That package was enacted to not just to stop the bleeding of the country’s collective wealth but also to spawn the next-generation of technologies and jobs, specifically those centered on green energy and innovation. And according to the President’s men and women, it is working.

According to Ernst & Young, clean technology investment during the second quarter of 2009 increased by 73 percent in terms of capital to $572 million compared with the first quarter of the year. Altogether, there were 48 rounds of financing. About $157 million of that went into clean generation with solar deals getting 26 percent of that money. Technologies to promote energy efficiency got $152 million of that.

The solar results were driven by deals such as the $25 million, first-round investment in Skyline Solar, which was led by New Enterprise Associates, says the global consulting firm. It adds that investments in energy efficiency were helped in large part by a $30 million foray in the residential smart grid company Tendril headquartered in Boulder, Colo. This investment was led by VantagePoint Venture Partners and has since followed with a partnership with General Electric to enable smart appliances to communicate over metering and broadband networks.

Government support is now playing an influential role in the growth of the U.S. clean-tech market. For example, the United States Department of Energy released more than $47 million from the American Recovery and Reinvestment Act of 2009 to accelerate the completion of eight smart grid demonstration projects in seven states. Beyond that, the stimulus plan provides $83 billion to clean technology investments and $6 billion to loan guarantees to shovel-ready projects.

To be sure, the nation has a long way to go before it completely recuperates. To keep the country humming along after the 9/11 attacks in 2001, the Federal Reserve Board reduced interest rates, which subsequently began a massive borrowing binge. Easy credit led to bad loans that were then sold on secondary markets to unsuspecting investors.

The financial toll resulting from those toxic assets has led the nation and ultimately the world into recession — one that has lasted 18 months and which has led to severe downturns in gross domestic product. That’s why even the President’s advisors acknowledge that while the worst is over, the best is still a long way off.

The culmination of the current recession is best seen in the venture capital numbers: The second quarter of 2008 was among the finest ever for the sector. But the second quarter of 2009 — despite it being considerably brighter than the dreary first three months of the year — attracted far less capital compared to the same time one year earlier. About 59 percent less investment was raised during this time span, says Ernst & Young.

Despite the overall drubbing that the economy has taken, the consulting firm says that the nation is in for better times. It credits not just improved investor confidence but also the change in legislative tone that is intended to attract risk takers to green energy. Other indicators point in the same direction, including the Silicon Venture Capital Confidence Index that has risen to 3.37 on a 5-point scale. By contrast, in the fourth quarter of 2008, it had its worst score in five years.

“Venture capitalists expect that the worst of the financial crisis is behind us,” writes Mark Cannice, a professor at the University of San Francisco, in a report in which he interviewed the area’s risk takers. “While the effects of the financial market disruption on the venture industry will linger for some time, most venture capitalists observed an increasingly determined and talented pool of entrepreneurs and a continuing march of innovation.”

He goes on to say that while innovation is a natural outflow of the human condition, money is what enables such ideas to move forward. As the capital markets begin to heal, resurgence in newer and greener tools will start to foment.

In a typical setting, entrepreneurial businesses would start by raising venture capital before they would try to access established debt and equity markets. But the credit crisis has changed all that. That’s why the administration and its supporters of the stimulus measure have argued that government had no choice but to step in, guarantee credit and provide federal dollars. The twin goals were to avert depression and to inspire business leaders to innovate.

The nation’s arduous economic woes appear to be ending. And while a robust recovery is far off, entrepreneurs and their financial backers are positioning themselves in an effort to try and usher in the next wave of clean technologies.