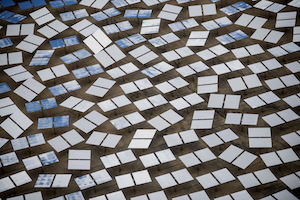 “We regularly check our existing markets and potential new markets on new project opportunities,” Innogy’s spokeswoman Viola Baumann said in an email response to questions from Bloomberg. “There’s no new development and that also applies to France.”

France has lagged behind its neighbors on renewable energy, even as its population worries more than most Europeans about climate change. While the country still gets about 72 percent of its power through its low-emissions fleet of aging nuclear reactors, it has trailed in the installation of new wind and solar technologies, which cover only about 6 percent of total consumption. By comparison, German solar and wind generate about 20 percent of electricity.

“Utilities are waiting for the new measures to reduce France’s historic red tape,” said Dario Traum, policy analyst at BNEF. “The new administration has said its going to have a focus on offshore wind, which if it gets going, is a sector that the big renewables players will be interested in.”

Hulot has already announced plans to simplify development of marine energies and geothermal power. His pledge has, in turn, peaked interest at Engie SA, located just outside of Paris.

The government’s pledge to review tender timelines and try to simplify the process are “very positive,” Engie’s head of renewables in France Gwenaelle Huet said in an interview. Cutting red tape for onshore wind is also key, because “proceedings are still burdensome and lengthy.”

It typically takes six to eight years to get onshore wind farm approvals, go through legal appeals, and be built, according to Huet. That could be trimmed by about three years by reducing documentation and limiting appeals to people directly concerned with projects, she said.

In solar, France will miss its 2023 target if it doesn’t tender more capacities from next year, Huet said.

Engie also wants to see changes to France’s offshore wind tenders, notable for lengthy processes to receive permits and exposure to legal challenges. Developers are also restricted from upgrading offshore parks with bigger turbines that are more efficient after tenders have been awarded.

Should Macron succeed in meeting his green power campaign pledges, Engie may raise its goal of doubling French onshore wind capacity to 3 GW, Huet said. Engie already won 1 GW of offshore wind in 2014 and is targeting a final investment decision at the end of next year.