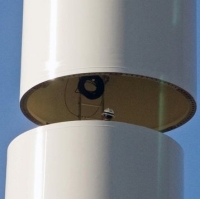 Michigan, United States– As capable as he was of creating bold visions, Gregory Adanin could not have imagined this moment. The Ventower Industries founder stood atop a post-World War II-era industrial landfill, where the blue sky on that sunny Michigan spring day belied both the smokestacks towering on the horizon near Lake Erie and the grimy history of the ground underneath his feet.

The contrasts didn’t stop there. Gathered with him in this setting, which juxtaposed rural wetlands and farmhouses in one direction against old-industry infrastructure in another, was a small crowd of between 150 and 200 people. Among them, standing atop the 20th-century industrial landfill, was an impressive contingent of dignitaries that included Michigan Governor Jennifer Granholm (D), U.S. Representative John Dingell (DMich.), and a host of other officials.

“If I’m being honest, [when he first conceived of his company] I don’t think I can say I imagined all that,” said Adanin, recalling the event and the presence of the prominent officials.

He certainly will remember it, though, and not because of who was there. On that day, March 30, Adanin and the assembled gathering were celebrating the groundbreaking for Ventower Industries’ new wind energy tower manufacturing plant, to be located in Monroe, Mich. Ventower is the brainchild of CEO Adanin, who worked to make the plant happen for close to two years, from the time he first started meeting with economic development officials, many of whom were present that day. The company aims to supply wind turbine manufacturers with towers.

Scott Viciana, Adanin’s all-purpose vice president and right-hand man who put the groundbreaking celebration together, said the word “rewarding” repeatedly comes to mind when he looks back on the day of celebration. “The lineup [of officials], so to speak, that we had was more than just people wanting a few minutes of coverage,” said Viciana. “It was a full-hearted collaboration of folks who see the need for wind energy and job creation in Michigan. It was just a really good, honest, sincere, positive event.”

Jobs and a multifaceted positive message. Welcome to the wind energy industry, Ventower. With that sunny day culminating years of hard work and signifying the next chapter for the nascent company, the short history of Ventower provides a glimpse into wind power’s ability to transform the know-how and infrastructure of old industry into high-tech opportunity.

Back in 2004, Adanin was seemingly far from the world of renewable energy: he worked in business development (and purchasing, at one time) for Metalloyd, Ltd., the U.K.-based steel giant that has operations in some 12 countries. But around that time, he grew interested in wind power and its possibilities, so much so that he began to consider ways he could become a part of the industry. The obvious niche: wind turbine towers, which rely heavily on good, old-fashioned steel to hoist a turbine’s nacelle and blades 80 meters and higher into the air. Thus, the concept for Ventower Industries was born.

In the ensuing years, Adanin worked to put together the necessary backing and incentives for the capital-intensive business, ultimately relying on a combination of elbow grease and creativity to get what he needed. To be sure, he found the right kind of backing from an interesting mix of organizations—federal, state, and even environmental: the U.S. Small Business Administration, the Michigan Economic Development Corp., and Michigan’s Department of Natural Resources and Environment. In addition, earlier this year, Ventower was awarded an advanced-energy manufacturing tax credit under the American Recovery and Reinvestment Act (ARRA) of 2009.

But why the state Department of Natural Resources and Environment? Adanin decided to put his new plant on a brown-field site—i.e., the long-forgotten, post-World War II industrial landfill that resides in a state as well known today for its economic woes as it was years ago for its auto manufacturing might. And so Ventower is green both in the product it produces and in its reuse of a brown-field location.

The 115,000 square-foot plant, which is scheduled to begin producing wind turbine towers in March 2011, will employ 150 new workers when fully operational.

“Clean energy is one of the economic sectors we’ve targeted in our ongoing efforts to diversify Michigan’s economy,” Granholm said at the groundbreaking. “Ventower’s state-of-the-art facility will help us toward our goal of making Michigan a center for green manufacturing.”

Adanin believes his company has several factors going in its favor to make it successful. Reason Number 1: steel. His expertise, he says, will make Ventower extremely competitive at sourcing the raw material, which comprises over 50% of a tower. Reasons 2 and 3: Location, location. With its auto industry history, Michigan’s transportation infrastructure is second to none, economic development officials are quick to point out, and Ventower looks to capitalize on that infrastructure. Interstate highways, rail lines, and, of course, the Port of Monroe on Lake Eerie will all be right on the factory’s doorstep. Reason 4: the area’s experienced work force, already well-versed in manufacturing.

In sum, “We think we can be very competitive,” says Adanin.

With the plant slated to open in less than a year, now is the time for Adanin to capitalize on his business development background. Contracts must be secured with wind turbine original equipment manufacturers (OEMs) for them to purchase the company’s towers. Those efforts have already begun; Adanin says his company is in “very substantive discussions with a number of well-known OEMs.”

But first the company must build the plant, a facility that will be Adanin’s vision realized.

This article first appeared in the April 2010 issue of Windletter and was republished with permission from the American Wind Energy Association (AWEA).