We don’t get to cover ocean/tidal energy as often as some of our other renewable energy topics, so imagine our surprise when we got word of not one but two updates this week — and both of them involving the hot topic of crowdfunding. Read on and if you like what you see, you can help contribute to their future success.

UC-Berkeley is developing what it calls a “seafloor carpet” to harvest underwater hydrokinetics. The system uses a thin sheet of material (rubber for now, elastic polymer eventually) on top of hydraulic actuators, cylinders, and tubes; as the “carpet” moves up and down it creates hydraulic pressure that is converted to power. (The motion of the sheet also helps dampen the surface waves above, much like a muddy seafloor does, another possibly attractive benefit.) Here’s the project’s Web site describing the system and its evolution, and here’s a video explaining how it works. In a prototype the team said they converted more than 90 percent of incoming wave energy, with 5.64 percent efficiency. One square meter, they say, could generate enough electricity to power two households; scaled up to 100 m2 could equal the output of a 6,400 m2 solar array. Or it could be put to use for desalination or filling pump-storage reservoirs. 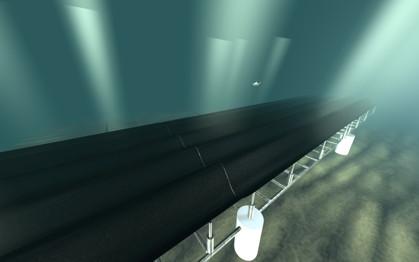 So far the team is searching for testing areas, ideally in shallow sparse coastal areas (60-foot depths with little marine life), hoping to complete testing within two years, and commercializable within a decade. To get started they’re launching a month-long crowdfunding campaign, seeking $9,600 in contributions to cover materials and gear.

Another ocean energy startup is taking its pitch to the crowdfunding masses with a KickStarter campaign in the coming weeks to support a new version of its “Ocean Energy Turbine.” Unlike the Berkeley group, it is going after somewhat deeper ocean currents (ideally >100 feet) with a slow rotation, high-torque direct-drive turbine initially sized as small as 30 meters across, that the group claims can harvest the energy equivalent of 30 propeller-style turbines. The slower motion also helps avoid impact to nearby wildlife, Crowd Energy notes. It is not offering many technology details, but the Kickstarter page offers a few insights: several patents are being filed for the aluminum turbine with carbon-fiber composite blades; the turbine is modular, and 90 percent of it can be changed out for maintenance; corrosion and “bio-fouling” will be addressed through bio-friendly coatings, metal isolation, and “cathodic protection”; and excess shaft torque would be put to use for desalination.

The $75,000 KickStarter campaign, scheduled to start in March, will help the company build out its new second-generation turbine and get it from its currently donated facility to Florida Atlantic University’s Southeast National Marine Renewable Energy Center for validation and open-water testing. The goal is to have four production-scale turbines sending power to the grid by 2015. Getting $1 million in funding will help the group secure its own site near FAU and start scaling the turbine up to production; ambitiously, for $5 million in funding it says it could create its own utility to sell energy in the grid. 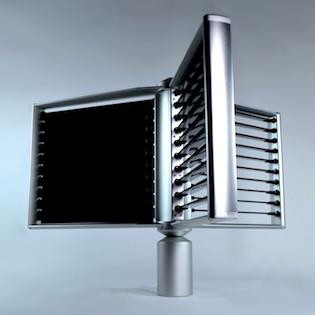