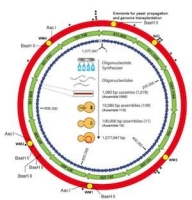 California, United States — In California, a long-term monopoly on the creation of bacterial cell life — held, reportedly, by God (or the open-source community known as evolution) — was broken yesterday when a scientific team headed by Drs. Craig Venter, Hamilton Smith and Clyde Hutchison announced completion of the final step in their quest to create the first synthetic bacterial cell.

Her formal name is M. mycoides JCVI-syn1.0 – you can call her Syndi.

In a publication in Science, Daniel Gibson, Ph.D. and a team of 23 additional researchers outline the steps to synthesize a 1.08 million base pair Mycoplasma mycoides genome, constructed from four bottles of chemicals that make up DNA. This synthetic genome has been “booted up” in a cell to create the first cell controlled completely by a synthetic genome.

According to Synthetic Genomics, “the process took 15 years to complete, and the 1.08 million base pair synthetic M. mycoides genome is the largest chemically defined structure ever synthesized in the laboratory.”

At a press conference Thursday, Dr. Venter yesterday described the converted cell as “the first self-replicating species we’ve had on the planet whose parent is a computer. This is a philosophical advance as much as a technical advance.”

In a television interview, Venter added: “It’s the next step. It’s a baby step, its a proof of concept that we can go from the computer into living cells, to control microbial systems to benefit humankind. It’s not for sale.” said Craig Venter.

While the scientific community hailed the breakthrough, some questioned the ultimate value of the technology, compared to biofuel applications that can be realized today using organisms with just a few genes knocked out or added.

Brent Erickson, executive vice president for BIO’s Industrial and Environmental Section, added, “This scientific achievement could someday lead to the development of new microbes that could consume carbon dioxide and turn it into clean burning natural gas or that could efficiently clean up crude oil spills. The understanding of metabolic engineering gained by today’s research achievement holds great potential to open new avenues for research and development.”

Renewable chemicals under development using new synthetic biology techniques include biofuels and biobased chemicals derived from renewable resources, including isoprene for rubber compounds, acrylics for paints and adhesives, surfactants for chemical emulsions, and adipic acid for producing nylon and other plastics. For more information about products made using synthetic biology and federal regulations, visit http://bio.org/ind/syntheticbiology/.

BIO and the biotechnology industry respect the power of the technology we are developing. We believe in the need for regulation, and we insist that this technology – in its myriad of applications – be used to benefit patients and others. For additional information on BIO’s bioethics principles, visit http://bio.org/bioethics/background/principles.asp.

“My worry is that some people are going to draw the conclusion that they have created a new life form,” Jim Collins, a bioengineer at Boston University told the New York Times. “What they have created is an organism with a synthesized natural genome. But it doesn’t represent the creation of life from scratch or the creation of a new life form.” The Times also quoted geneticist George Church knocking the announcement as “not necessarily on the path ” to creating useful microorganisms, while Caltech geneticist David Baltimore said that “Craig has somewhat overplayed the importance of this,” describing the achievement as a technical tour de force in scale, rather than a scientific breakthrough.

Venter said that the bacterium used for the proof of concept is not suitable for biofuels, but that the concept would be shifted to a more suitable candidate. Venter, who has developed a $600 million partnership with ExxonMobil and has developed a library of 450 million genes, primarily from algae, and said that a goal of Synthetic Genomics is to “build an entire algae genome so we can vary the 50 to 60 different parameters for algae growth to make superproductive organisms.”

Synthetic Genomics funded the $40 million synthetic life project, which was carried out by the J. Craig Venter Institute.

Jim Lane is editor and publisher of Biofuels Digest.

This article was originally published by the Biofuels Digest and was reprinted with permission.