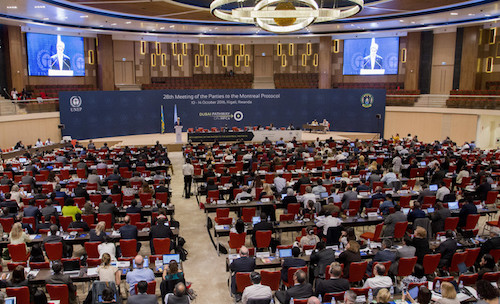 Even though evidence on an ever-worsening global climate keeps pouring in with alarming frequency, the last 12 months have, in fact, been a relatively good year for global climate policy. Next week, the world’s countries meet in Marrakesh, Morocco, to follow up on the gains made at Paris last year, and to try to reconcile these two facts.

The 22nd conference of the parties (COP22) to the U.N. climate change convention in Marrakesh will not result in a grand agreement or the grandiose chest-thumping that characterized its Paris predecessor. Yet, this meeting is a critical test of whether the parties to the Paris Agreement are willing to realize, or capable of realizing, the promise of Paris and creating a momentum for action.

COP22 will begin with good wind behind its sails, but under some very ominous clouds.

The most visible political gain has been the ratification in record time of the Paris Agreement, which enters into force Nov. 4. By joining, countries have shown a willingness to act on reducing national emissions, although they stopped short of taking on legal commitments. Notwithstanding the fact that the agreement is weak in terms of legally binding obligations, this rapid ratification signifies an important global buy-in.

Related signs of hope come from the two largest emitters, China and the United States, that have begun investing in meaningful domestic initiatives. This is assisted by a palpable shift in the market economics of renewables, especially wind and solar, whose costs in some parts of the world is now rivaling or less than coal.

By far the most important potential game changer in real climatic terms was the agreement in October to phase out the use of hydrofluorocarbons (HFCs), a strong greenhouse gas. If fully implemented, this could remove the equivalent of 70 billion tonnes of carbon dioxide from the atmosphere by 2050, mostly by developing countries.

On the other hand, the growing set of new scientific evidence confirms climate change is no longer an issue of the future; it is the most pressing challenge of now.

Every month this year has been the hottest ever recorded for that month since measurement began. This was yet another year of alarming Arctic ice melt. And 2016 is poised to be the globally hottest year ever in historical record and the 40th consecutive year that the annual temperature would be above the 20th-century average.

The urgency of global climate change is evidenced by the discovery that the atmospheric concentrations of carbon dioxide have crossed 400 parts per million and are unlikely to drop below this level in our lifetime. There should no longer be any doubt that we are quickly running out of time.

As its host Morocco bills Marrakesh as “The COP of Action,” COP22 should be judged by the extent and urgency of implementable action that it triggers in three critical areas: mitigation, adaptation and financing. And, within these, by how much attention and investment is directed towards the needs of the most vulnerable countries.

The goals of the Paris Agreement are to reach a global peak in GHG emissions as soon as possible with the intent of holding global average temperature increases to well below 2 degrees Celsius above preindustrial levels and to pursue efforts to limit it to 1.5°C.

In support of this, countries have formulated their voluntary commitments for the post-2020 period in the form of Nationally Determined Contributions (NDCs). There will be an informal dialogue of these NDCs in 2018 and a formal stocktaking to revisit these targets in 2023.

However, the current suite of NDCs is simply not up to the task. Even with full implementation, there will be an estimated global average temperature increase of between 2.6°C and 3.1°C by 2100. Waiting for 2018 or 2023 to review national commitments is too long and condemns the planet to a significant level of warming. For some island states, this could mean devastation.

There is a need to quickly raise ambitions. To come anywhere near the goals they have set for themselves for the next 10-15 years, countries need to have already started making significant, visible cuts in emissions. Most have not. Marrakesh needs to push countries to increased ambition and accelerated emission cuts.

Living as we already do in the “Age of Adaptation,” it would be tragedy compounded if adaptation were to become the lost issue of the Paris Agreement.

For many countries – especially the most vulnerable developing countries that have had the least to do with causing the problem and are least able to cope with its impacts – adaptation is not insurance for the future; it is an urgent need of today. Most often, the biggest challenges relate to water and agriculture.

The issue is one of resources and investment. There are plenty of dedicated funds established to provide money for adaptation measures. Too often, however, industrialized countries have failed to fulfill their pledges, and access to funds is made difficult by complex procedure and criteria.

Marrakesh needs to ensure that real money is available for adaptation, including a greater share of resources from developed countries dedicated to climate change action in developing countries. And funds need to be accessible to the countries most in need and on terms that meet their own national capabilities and priorities.

The Paris Agreement calls on all countries to ensure that finance flows worldwide are consistent with a pathway towards low greenhouse gas emissions and climate-resilient development.

Developed countries have pledged to mobilize jointly at least US$100 billion a year from public and private sources in support of mitigation and adaptation in developing countries by 2020, to be scaled up over time as part of the implementation of the Paris Agreement.

Finance discussions, however, are plagued by political disagreements over what should legitimately be counted as climate finance as well as data uncertainties and difficulties in correctly calculating contributions from different sources.

Developing countries, especially small island states, worry that much of this will be “imaginary money” that will never materialize – at least not in ways in which it can be deployed toward addressing their climate vulnerabilities and survival needs.

COP22 needs to directly address the issue and the legitimate concerns of different stakeholders. A reasonable goal for Marrakesh would be to bring more clarity to the finance issue including what dollars count, how and for what, and how they flow, to whom and for what priorities.

COP21 at Paris set for itself the goal of delivering an agreement. It did. COP22 in Marrakesh has a much more difficult, and important, goal. It must deliver action. This is not going to be easy.

If Marrakesh can build on the policy momentum of Paris and the dire scientific warnings that have become irrefutable to spur countries to real action, then it would achieve a historic and heroic feat worthy of a true “Action COP.”