London, UK For two decades, Germany has been a global leader in renewable energy, first creating feed-in tariff (FiT) laws in 1991, then in 2000 via the Renewable Energy Sources Act (EEG) establishing different FiTs for different renewables.

Since 2007 the nation has accounted for 30%–50% of the planet’s annual solar PV capacity. Cumulative installed solar capacity is roughly 25 GW and the government is targeting 66 GW by 2030.

To avoid overheating as seen in other European nations (Spain in 2008 and 2009, and Italy in 2010 and 2011), Germany has reined in its FiT plans by nearly 40%. The EEG, which costs about €7 billion per year, is structured to degress as installations climb, thus maintaining steady internal rates of return (IRR) for projects, and generally keeping pace with plunging PV costs.

In the first few weeks of 2012, though, German officials realised they had a big problem: preliminary estimates indicated new solar PV installations in 2011 leaped to a record 7.5 GW, far outpacing the country’s 2.5 – 3.5 GW plans – with a whopping 3 GW in December 2011 alone, thanks to mild weather and the desire to get installations done before the next scheduled FiT reductions in January.

Continued half-year adjustment of the subsidies, now scheduled for a 15% degression to about 24 €cents/kWh given the 2011 surge, would no longer be enough. New policies were immediately proposed: more frequent step-down degressions in the existing FiT were preferred by environmental minister Norbert R&ouml;ttgen, and some kind of hard cap on annual installations, as low as 1 GW annually or even lower, was proposed by federal minister of economics Philipp R&ouml;sler. Industry watchers speculated on what would come out of negotiations, guessing on monthly or quarterly FiT reductions or a less restrictive hard cap.

On 23 February, Röttgen and Rösler announced their framework of a compromise – and it was more severe, and takes effect much sooner, than anyone anticipated.

Reactions to the News

The newly proposed subsidies cut the FiT levels by up to 30%, limit the payback on electricity produced, and eliminate a self-consumption bonus. They also take effect in January 2013 but apply to everything installed by 9 March, not 1 April as many had thought. (The previous FiT structure would have cut the levels by another 15% in July.)

• Starting in May, the FiTs will be reduced monthly by 0.15 €cents/kWh for all new systems;

• New small systems will be remunerated for 85% of the electricity produced; medium and large-sized systems will get back 90%;

• A bonus for self-consumption will be eliminated;

Not surprisingly, the German solar market is up in arms about the changes, which are the most severe since the government’s support began in 2004.

‘This decision sends exactly the wrong message about renewables at a critical time for the industry and for EU efforts to achieve its energy goals,’ said Ingmar Wilhelm, president of the European Photovoltaic Industry Association (EPIA). ‘No one believes that PV support schemes should last still for long, and everyone knows that they need to be smart, sustainable and properly adapted to changing market conditions.’

‘The breathing cap worked, and would have further slowed down the market after the lack of growth between 2010 and 2011,’ agreed Markus Lohr, chief analyst of EuPD Research. ‘Market instruments require time in order to come into effect; there was no real need to intervene in the market again.’

The strategy of accelerating reductions in Germany’s solar support schemes have greatly narrowed the gap between PV and conventional electricity sources, Wilhelm argues, but the new rules ‘create an increasingly unpredictable regulatory climate containing impossible conditions which put the entire PV industry at risk.’ Narrowing the government’s options to support solar, and more broadly its ‘Energiewende’ energy transformation effort, ‘will only provide one result: ever higher costs for the entire energy system.’

Hours before the new FiT proposals were announced, the Bundesverband Solarwirtschaft (BSW), Germany’s solar industry association, organised a protest attended by roughly 50 domestic solar companies and thousands of workers against what were assumed to be tightened restrictions. SAG Solarstrom AG, a solar PV plant designer and builder taking part in the protests, accused the government of ‘completely choking the German market’ and jeopardising jobs in Germany.

‘It is completely incomprehensible to us how the federal government can argue these drastic reductions,’ said SAG CEO Karl Kuhlmann. ‘These short-term drastic reductions are slowing down the very positive development of photovoltaics that we have had up to now.’ German electricity suppliers are hiking prices by more than 3%, he said, far out of balance with any increases related to the EEG: ‘Photovoltaics is being made a scapegoat by the energy corporations in order to expand their own profit margin without any risks.’

Industry watchers both inside and outside Germany are concerned about what the harsher and sooner FiT adjustments will do to solar project economics and end demand. 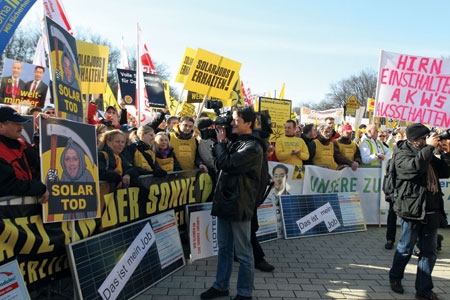 The German solar industry is up in arms over recent FiT changes. (Source: BSW-Solar)

‘Overall we believe it is still bad news for the German solar industry,’ likely reducing IRRs from high single-digits ‘to low single digit at best (and in most cases non-existent), which will reduce demand dramatically,’ wrote Citi analyst Tim Arcuri. ‘Given that Germany was greater than 30% of global demand last year with 7.5 GW installed, a dramatic slowdown in Germany, and at such short notice will, we believe, be negative for pricing across the solar value chain in an industry already suffering from overcapacity.’

Maxim Group analyst Aaron Chew agrees: ‘It’s hard to get projects going when the economics change every 30 days.’ The whole model is based on cash flow, and any delays under a monthly-adjusted FiT system ‘changes the whole equation’ for everyone from financers to suppliers to EPC firms.

Vishal Shah from Deutsche Bank echoes that the new FiT structure ‘increases the risk of significantly reducing the installation run-rate in Germany […] Our checks indicate that German distributors could start cancelling orders immediately, in order to work down inventory.’

As REW goes to press the new FiT plan still has to be officially ratified, first and probably quickly by the Bundestag (lower house), and then it goes to the Bundesrat (upper house) where some individual states are likely to push back for changes. Both IHS iSuppli analyst Henning Wicht and Deutsche Bank’s Shah acknowledge that once the upper house, where states’ interests are more prevalent, takes a crack at it, the final law that gets passed and enacted could be somewhat less harsh than what is currently proposed. Unfortunately, that would add even more delays to the process and cause more uncertainty among suppliers, project developers, and end users, and that might even be worse: ‘It’s better to know what’s happening even if it’s bad,’ says Wicht.

It’s important to remember that the bigger picture for solar energy, and for all renewables, is the end-goal of grid parity, a level playing field with conventional oil and gas energy sources. In that context, the true big picture in Germany’s current solar subsidy scuffle is that it represents the future of a post-incentive solar PV market.

‘We really need to take a step back from FiTs and get into the electricity market,’ Wicht notes. ‘The end market is where PV has to compete.’ Chew agrees: Germany needs to ‘transform to a pure grid-parity model, and rely on low solar system costs to generate returns.’

And that starts by getting as many costs as possible out of solar systems to begin with. ‘System prices for large installations are around €1500–1600, but they have to drop further,’ at least 10% if not more, Wicht says. PV module prices have plunged over the past couple of years, but costs can be squeezed from other areas of the supply chain, particularly on the balance-of-systems (BoS) side.

‘There is a lot of potential to reduce BoS costs, from mounting systems to inverters,’ Wicht points out. He cited one power park in Germany that redesigned its mounting systems under construction (which typically use stainless steel or aluminium) and trimmed mounting costs by 50%. Such efforts will take time, though, and given the rapidity of the new FiT changes, sourcing lower-cost modules will probably be the preferred method among the solar supply chain.

Another problem to be overcome is that renewable energy sources don’t fit neatly into the best interests of utilities. ‘If Germany continues to build up PV capacities at the current speed, these capacities will seriously conflict with conventional power plants regarding grid capacity,’ explained Solarbuzz analyst Susanne von Aichberger. Wicht has a different angle on utilities’ motives: ‘Solar cuts into the profit margins of electricity utility suppliers,’ meaning noon and peak times, and decentralised production and consumption of electricity doesn’t rely on a grid fee, he said. ‘That really disturbs the business case of utilities.’

On the other hand, he vocally supports ‘continued robust expansion’ of domestic solar power as ‘essential’ to Germany’s energy system, and points out that solar ‘enjoys broad support from the population at large.’ Solar contributes 4% of its total electric power and is expected to rise to 7% within five years and 10% by 2020. Critics lament the imbalance between the subsidies and solar’s contribution to the grid, but PV’s power production generally lines up with the heaviest periods of electricity demand; it is the dominant electricity source in some regions at sunny noontimes.

A study by the Institute for Future Energy Systems, commissioned by the BSW, shows that solar power reduces average trading prices on the European Power Exchange (EPEX) by an average of 10% per day, and by as much as 40% at midday. That added up to savings of €520–840 million in 2011, corresponding to lowering prices by €4–6/MWh. The BSW also cites data from Prognos showing that expanding solar capacity by 70% through 2016, to 7% of total electricity mix, would only add 2% to electricity prices.

Germany’s consumers clearly still want renewable energy options. The BSW cites studies indicating a vast majority of Germans (91%) think solar power is important, with 40% believing that support was strengthened as a result of the nuclear disaster in Fukushima last spring. The figures from pollster firm TNS Emnid also indicate 69% of respondents think the solar energy policy is not expanding too quickly, and 60% also feel current policies do too little.

Wicht believes Germany will eventually get to a 100% renewable-sourced electricity supply, faster than anyone expects – not 20-30 years, but maybe just 10, he says. Wind power is still a big business, and where wind adoption faces challenges (longer permitting phases, not viable for cities or villages, and grid connection/maintenance for offshore installations), solar PV is better positioned. Meeting that rapid adoption pace will also require improved and enough energy storage to help offset renewables’ Achilles’ heel of intermittency.

First things first, though. Once Germany adopts the new solar FiT changes and its solar industry participants end their handwringing, ‘we’ll see another wave of PV market dynamics,’ promises Wicht. And from there it’s on to bigger aims of substituting entire energy parks, and keeping Germany as a greener, cleaner global energy leader.