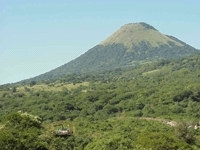 Toronto, Ontario [RenewableEnergyAccess.com] Polaris Geothermal reports its progress generating commercial power on its San Jacinto Power Project in Nicaragua, projected to reach 66 MW. Construction of the first 10 MW phase of the project has been installed and both 5MW units have been tested and run synchronized to the national grid.

While the power generating facility uses proven production wells, the company received a final geophysical survey report last June, around the time of its official inauguration attended by Enrique Bolanos Geyer, President of the Republic of Nicaragua, and senior government officials, which indicated that resource sectors of the project are larger than estimated. Consultants assigned a 90 percent probability that the entire resource contains energy sufficient to support production of 200 MW of power over a 20-year period, a 16 percent increase over earlier findings. During reliability testing Polaris will be selling power at $0.0595 per kWh until it is satisfied with reliability of its installations. The San Jacinto began producing power in July of 2005.