More
Home Baseload Geothermal Piping Systems Get into the Groove 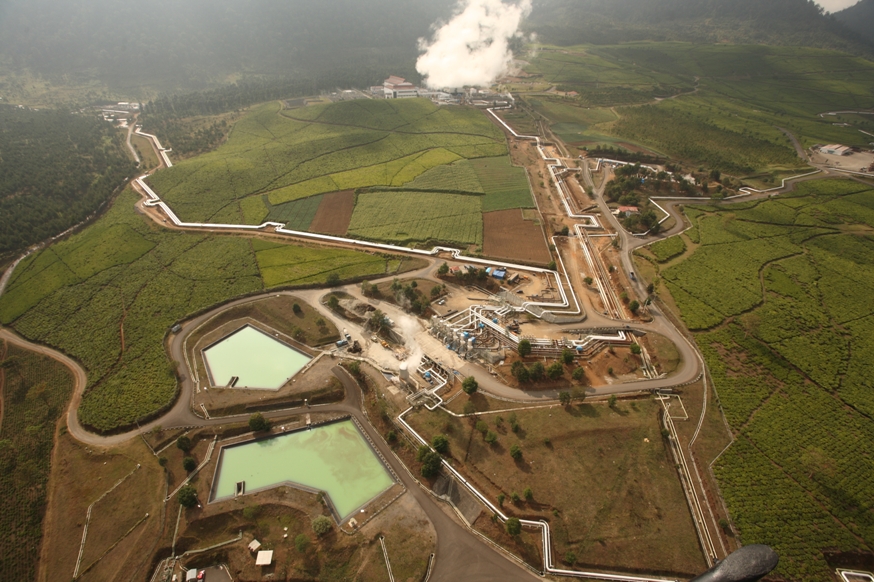 How do you design outdoor piping to account for changing elevation, uneven terrain, seismic and thermal movement, and the reroutes required of a drilling fluid system? This was the challenge faced by engineers and contractors for Indonesia’s largest geothermal power plant, Wayang Windu. The pipe-joining method would need to offer flexibility and superior maintainability, and project personnel sought a method that would not be susceptible to inclement weather or pose undue safety hazards. Welding and flanging couldn’t meet those parameters, but a solution was found in grooved mechanical piping.

Located on the Ring of Fire and home to more than 200 volcanoes, Indonesia is estimated to have about 28 GW of geothermal potential for power generation, which is about 40 percent of the geothermal potential for the entire world. 41 volcanoes are found on the island of Java alone, providing abundant geothermal resources and holding the highest potential for energy production. Fittingly, this reflects the locale’s demand for energy. Home to 135 million inhabitants — about 60 percent of Indonesia’s population — Java is one of the most densely populated areas in the world. To meet energy demand, geothermal plants have been expanding to increase output.

The Wayang Windu Geothermal Power Plant sits in the heart of this activity in Pangalengan, West Java. A Star Energy plant, Wayang Windu is a flash steam power plant listed as one of the largest in the world. Currently a two-unit site with exploration for unit 3 underway, Wayang Windu has a total installed capacity of 227 MW. The first unit was completed in 1999 and has been producing at full capacity of 110 MW since 2000. The second unit, with capacity of 117 MW, was been online since 2009.

While the need for geothermal energy is clear, construction or expansion of plants, wells and the piping systems that connect them often presents several challenges that must be considered in the design phase.

Located in a highly active seismic zone, Wayang Windu experiences shifts in the ground, both subtle and extreme, on a daily basis. The power plant’s buildings and infrastructure are designed to absorb this movement, but other necessary components — long stretches of outdoor piping, for example — don’t afford the same flexibility. In addition to seismic movement, outdoor piping systems are subject to thermal expansion and contraction that must also be accommodated.

The Wayang Windu site sits at an altitude ranging from 1,700 to 2,200 meters above sea level, with piping systems spanning a significant portion of that elevation change. Joint or pipe flexibility would be ideal to enable the systems to easily follow the contours of the uneven terrain.

At Wayang Windu, the drilling fluid piping system traverses the field to enable the circulation of lubricating fluids — primarily condensate — for drilling and repair work. As exploration continues, personnel would need to be able to dismantle and reassemble the piping system to account for rerouting and expansion.

All told, the requirements for the drilling fluid system were flexibility to withstand seismic and thermal movement and accommodate changing grades, and maintainability to ease system reroutes and extensions. As an outdoor piping system, it also had to withstand the elements. Galvanized pipe was specified to resist corrosion and wear.

Engineers quickly realized that welding, often considered the default pipe-joining method, would pose problems. Welding produces rigid joints that would not provide the flexibility to accommodate thermal and seismic movement. When such movement is not properly accounted for, stress at the joints can result, in some cases leading to leaks. The uneven terrain could also have caused misalignment issues during assembly, necessitating quite a bit of rework and slowing the construction schedule.

Welding galvanized pipe vaporizes the protective zinc coating near the welds, which would require additional time to repair in the field. The safety issues associated with welding were also a concern. Welding galvanized steel exposes the worker to fumes that can lead to “metal fume fever,” and the sparks produced could pose a fire hazard to the dense jungle surrounds during the dry season. Adverse weather conditions during the wet season could also affect welding activities, requiring additional protective measures.

Finally, the permanent joints produced by welding would not permit the pipeline to be easily relocated or expanded, a requirement that could not be compromised.

Flanging provides a more maintainable joint that permits the dismantling and reassembly of piping, but the method is subject to some of the same limitations as welding in terms of flexibility. Flanges, like welded joints, are rigid, so the joining method requires additional devices or expansion loops to accommodate piping deflection caused by movement. Routing piping systems joined with flanges over uneven terrain is just as challenging as it is with welding.

To alleviate these problems, grooved mechanical piping was specified for the drilling fluid system. The engineer and contractor discovered that the design, installation and maintenance benefits of flexible grooved mechanical couplings stood in direct contrast to the issues associated with welding and flanging. Flexible couplings enable quick, easy assembly and disassembly without heat or flame, and permit controlled linear and angular movement at the joint.

A grooved mechanical pipe joint consists of four elements: grooved-end pipe, a gasket, coupling housing, and nuts and bolts. The pipe groove is made by cold forming or machining a groove into the end of a pipe. A gasket is centered around the joint of two abutted grooved pipe-ends, and the coupling housing segments are placed over the gasket so that the key sections of the housing engage the grooves. The bolts and nuts are then tightened with a socket wrench or impact wrench. In the installed state, the coupling housing encases the gasket and engages the grooves around the circumference of the pipe to create a leak-tight seal in a self-restrained pipe joint. The completed joint is visually inspected; metal-to-metal bolt-pad contact confirms proper assembly.

Standard grooved couplings can be installed up to five times faster than welded joints and three times faster than flanged joints. Ready-to-install couplings, a recently developed technology that allows the coupling to be pushed onto the pipe-end as a fully assembled unit, can double the time savings.

Grooved couplings do not require heat or flame to assemble, nor does installation produce fumes, reducing risk to personnel and property. They can also be installed in any weather condition without tents or heating equipment.

Grooved couplings create a union at every joint so that when maintenance or system alteration is required, the couplings can be removed by loosening the nuts and bolts and removing the housing and gasket from the joint. The removal of two adjacent couplings permits the removal of a section of pipe. Grooved-end pipe and couplings can be reused, with assembly following the same procedure as initial installation.

Flexible grooved couplings permit a limited amount of linear and angular movement. The interaction of the components permits this movement: the dimensions of the coupling key are narrower than the groove in the pipe, allowing room for the key to move within the pipe groove, while the width of the coupling housing allows for pipe-end separation, leaving room for controlled expansion, contraction and deflection.

Independent testing conducted at the ATLSS center, a member of the NEES (Network for Earthquake Engineering Simulations) testing group, demonstrated the reliability of grooved system components when exposed to seismic movement. Water-filled assemblies joined with grooved couplings were pressurized to 200 psi and exposed to accelerations up to 50 percent greater than the Northridge, California, earthquake. No pressure loss or leakage was observed during the tests.

Victaulic Style 77 flexible couplings and grooved-end fittings were used to join the drilling fluid system at Wayang Windu, meeting the requirements for flexibility and maintainability and offering additional benefits on site.

Style 77 couplings feature a two-piece housing, two nuts and bolts, and can withstand pressures of up to 1,000 psi. The couplings provided the inherent flexibility needed to accommodate seismic and thermal movement and deployment of the drilling fluid system over the uneven terrain at Wayang Windu.

The ease and speed of installation of grooved components contributed to rapid completion of the project and eliminated construction delays due to rain. Welding machinery did not need to be transported along the length of the pipeline as it was assembled, and the galvanized finish on the piping was maintained throughout the installation process, ensuring corrosion resistance and protection throughout the system. The lack of hot works also eliminated safety issues and fire hazards.

The drilling fluid system was recently rerouted as part of the unit 3 exploration process, validating the maintainability of grooved piping systems. Sections of pipe were dismantled and repositioned, helping to achieve production targets. New sections of pipe were grooved off-site, and shipments were coordinated to further improve jobsite efficiency, limit downtime and reduce overall costs.

Seismic and thermal movement, changing elevation, uneven terrain, and the need to disassemble and relocate the piping system contributed to a complex construction scenario. Grooved mechanical piping was the answer to the installation challenges, providing the requisite flexibility and maintainability. Like geothermal energy itself, grooved piping systems are reliable, efficient and sustainable. The use of grooved piping is increasing on utility and process piping systems in the power industry, and Wayang Windu demonstrates the value such systems can bring to plant construction and expansion.