WASHINGTON, D.C. — The global geothermal industry had a boom year in 2013, bringing the most capacity online since 1997. The market saw 530 megawatts (MW) commissioned, which brought total global capacity to just over 12,000 MW, holding a steady 4 to 5 percent growth rate, according to the Geothermal Energy Association’s (GEA) 2014 Annual U.S. & Global Geothermal Power Production Report. These projects are located in the U.S., Philippines, Mexico, New Zealand, Germany Kenya, Australia and Turkey.

Looking ahead, there are 12,000 MW in the global pipeline, which refers to projects in phases of exploration or under construction, and 30,000 MW under development, which includes prospects (when a government tenders the property to a company for further exploration). About 10-16 percent, around 1,900 MW, of projects are currently under construction in 15 countries, and if all are completed on schedule, global capacity could reach 13,450 MW by 2017, according to the report.

If international progress stays on track, several countries, such as Indonesia or the Philippines, threaten the U.S.’ title for most nameplate capacity within the next decade. 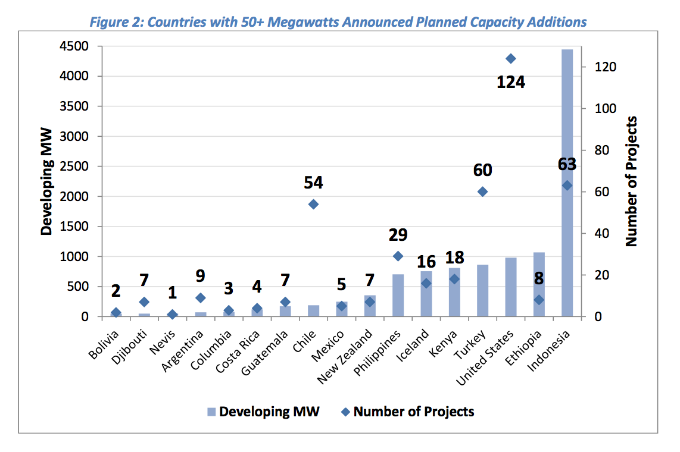 The U.S. added about 85 MW of capacity to its portfolio in 2013 to bring its total up to 3,442 MW, adding new or refurbished projects in Utah, Nevada, California and New Mexico. These additions were 40 percent lower than what was added in 2012 as the industry continues to struggle with several roadblocks to development. There were also 1,000 MW of planned capacity in the works and about 3,100 MW under development, which also marked a downward trend from 2012’s 2,500 MW and 5,100 MW of planning, respectively.  “Simply put, the U.S. geothermal industry is trending opposite of the international market, which is growing [steadily],” according to the report.

The report notes that this sluggish growth is due to a number of policy barriers: inadequate transmission as geothermal resources are typically found in areas with limited to no infrastructure, permitting delays, low natural gas prices and weak demand for new geothermal projects. The industry is known for its “boom/bust” periods and the U.S. experienced heavy consolidation in 2013 as developers dropped projects that no longer made financial sense due to these barriers.

A major barrier that has lingered for some time now is government and utility failure to recognize the value of geothermal energy. Industry experts belabor the fact that geothermal energy is a baseload resource — it supplies consistent, reliable power, unlike intermittent renewables like wind and solar.

“The U.S. has experienced slow or no growth in the past five or six years…Couple that with the fact that we don’t think [geothermal] is fairly valued: We don’t get rewarded for the baseload nature of our energy,” said Craig Mataczynski of Gradient Resources. “Our product is undervalued in the commodity market where gas prices are low, so we don’t do well. Our product must be properly valued in the marketplace so we can better compete in the U.S. market.”

Despite these issues, about 50 percent of California’s estimated resources, 60 percent of Nevada’s, and 60 percent of Utah’s are still untapped, according to the report, which may indicate a promising future.

Several geothermal-heavy states have passed measures that could lead to increased development. The California Public Utility authorized Southern California Edison Company (SCE) to procure up to 700 MW and San Diego Gas & Electric Company (SDG&E) up to 800 MW of preferred clean capacity by 2022 to replace the retiring San Onofre Nuclear Generation Station. While this doesn’t specifically carve out geothermal, the industry is hopeful that it will be a competitive technology. According the report, it is notoriously difficult to develop projects in the state due to its complicated regulatory framework, but it is also home to some of the most promising resources. For example, the Salton Sea area in Imperial Valley, Calif. may hold more than 1.7 GW of geothermal. If the development initiative led by the Imperial Irrigation District (IID) and GEA moves forward, it could increase overall U.S. geothermal capacity by 50 percent by 2032.

Nevada — cited as the most geothermal-friendly state with more streamlined development framework — announced that it will retire more than 30 MW of coal plants by December 31, 2014, and at least an additional 250 MW by December 31, 2017. It will replace this power with renewable energy in 100-MW request for proposals (RFP) increments over three years starting in 2014, and “it’s expected geothermal power will win a portion of these 100-MW RFPs, but it will be competitive process.”

Oregon also made geothermal-friendly changes, with the Oregon Public Utilities Commission updating its methodology to calculate renewable energy avoided costs to account for capacity contribution. Previously, it did not consider ancillary and integration costs for all renewables, and analysts are hopeful that this will put geothermal on a more equal playing field as wind and solar.

“The geothermal resource base is still largely untapped,” noted GEA analyst Ben Matek. “With new initiatives in Nevada, California and Oregon moving to recognize the values of geothermal power, we are optimistic that state policies could spark another period of growth in geothermal power over the next decade.”

Unlike the U.S., international geothermal development has been steadily growing, and 2013 was no exception. There are currently more than 700 projects under development in 72 countries. According to the report, about 10 percent of these projects have drilled injection and production wells or are in the process of constructing power plants. Fifty percent of the projects are in the exploratory stage and have drilled exploratory wells, acquired funding, or researched the resource.

“[The Geothermal industry is] very busy internationally. Huge things are happening in East Africa, a lot of organizations are putting a lot of money in expanding the geothermal business,” said Mike Long of Power Engineers. “Huge plants being built with a lot of expansion plans. We’re optimistic about what going on over there and hope it spreads.”

In the Asia-Pacific region, areas of interest include the Philippines, which recovered quickly from significant damage dealt by Typhoon Haiyan. Most normal geothermal activity was restored by February 2014, according to the report. Indonesia also has significant development plans with 4,400 MW of planned capacity additions, though it may take quite some time for the plants to come to fruition due to policy and development issues. Japan recently introduced favorable feed-in tariffs following the Fukushima nuclear disaster, with an emphasis on small-scale projects.

In Latin America, Mexico announced that is will open its electricity market to private investors, which is expected to bolster geothermal interest. South America, though rich in resources, is still slow in exploring projects due to regulatory issues. Chile is likely to be the first country to commission a project, with 50 projects in its pipeline.

“Internationally there is a lot going on. A few years ago only 24 countries were working on geothermal projects, now there are 72,” said Matek. “In the U.S. it was definitely different; it was a quieter year…While it wasn’t exciting, there is a lot of opportunity for the future.”