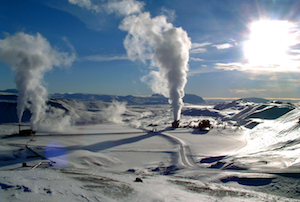 For more than a decade, advocates of geothermal energy have pushed for the same kind of treatment other energy producers receive from Canada’s federal government — with little progress.

But with the release of the federal budget on March 22, that changed.

The budget included the expansion of financial mechanisms to geothermal, which will allow these emerging renewable energy operators to write off more expenses. The change is significant for geothermal energy, which requires higher upfront investments than wind or solar.

“This is a milestone for us,” said Alison Thompson, chair and co-founder of the Canadian Geothermal Energy Association (CanGEA). “We’re legitimate. We’re there.”

Granted, the budget only provided one of seven things CanGEA requested.

Conservative MP Matt Jeneroux, who recently tabled a private member’s motion in the House of Commons to support Alberta’s geothermal sector, said in an interview that the budget was “an early success” and shows awareness of the industry.

“Now we really need to make sure that awareness translates into actual action,” he said.

Thompson says the geothermal sector was successful in getting the tax code changed to recognize geothermal energy a few years ago.

But there was a typo. Or at least, that’s the suspicion.

“Geothermal energy was stated in the tax code, but further down [in the code] it became just ‘geothermal electricity,’” Thompson explains. “So for the past several years, we’ve had this situation where geothermal has been acknowledged as a renewable energy, but only the electricity side.”

But you have to have geothermal heat in order to spin a turbine to generate electricity, meaning the suspected typo seriously restricted the industry.

The changes also allow for the legal use of “flow-through shares,” a mechanism that can help attract investors during the early exploration stages. Such measures have a tax value of about $9 million.

Unlike wind or solar, it’s impossible to know that an area is good for geothermal until drilling. That requires bringing on investors at an “earlier risk stage” than other technologies.

“Any sort of project or process or incentive or write-off program that can allow for capital to flow more easily towards exploratory drilling really is one of the main areas we see there being an opportunity for significant growth and development of the industry.”

Jeneroux, who represents the riding of Edmonton Riverbend, says that he first became interested in the concept of geothermal via the issue of orphaned, abandoned and suspended oil and gas wells in Alberta.

After all, there’s plenty of potential for retrofitting some of the wells to capture geothermal energy and create lots of jobs. But Jeneroux says he started to see a number of hurdles at the federal level that needed to be overcome before the sector could proceed. He says he talked to Conservative interim leader Rona Ambrose about a year ago, and she gave him the clear to look into the issue a bit more.

“Initially, there was a lot of education needed as to what geothermal technology was and is and now that people — especially my colleagues — understand it a bit more, it’s more ‘well, why haven’t we been doing this before?’” he says. “It’s become unanimously supported in our caucus and now hopefully strong support from the House of Commons as well.”

Conservative support for geothermal is something that gives Thompson great hope. It’s confirmation that geothermal is “bipartisan energy” that appeals to politicians of all ideologies, regardless of where they land on issues like climate change, energy security or job creation.

Geothermal energy is “starting to bubble to the forefront,” Collins added.

But there’s still much more to be done to really get the geothermal sector up and running.

Jeneroux’s motion will likely help keep the subject relevant for a while longer: it still needs to go through the process of being debated and brought before a committee, which has an uncertain timeline.

There’s also the potential for more federal support to be unveiled with the mid-year budget review, says Thompson, or maybe something next spring. She emphasizes that “parity has not been achieved” for geothermal.

Further steps the federal government could take to “de-risk” the sector include: loan guarantees, expansion of the Eco-Energy for Heat Initiative, providing more funding to industry groups such as CanGEA and taking a leading role in resource mapping.

“Let’s just solve the whole problem,” Thompson suggests. “Let’s not do it piecemeal. Because that does not lead to investor confidence or certainty.”

At this stage, it’s largely about exploratory drilling, and setting projects in motion.

Borealis GeoPower has received a drilling permit for its Valemount project in British Columbia. Thompson, who serves as principal at Borealis, says the company is working hard to have a late spring or summer drilling season.

While the federal budget didn’t give geothermal advocates everything they were hoping for, it is a good start for setting a precedent.