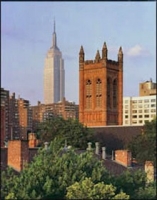 New York, New York [RenewableEnergyAccess.com] The General Theological Seminary (GTS) of the Episcopal Church is converting its present heating-cooling system, which uses fossil fuel, to an energy-efficient geothermal system. Drilling for a series of standing column wells, integral to the new system, begins this fall.

Project architect Yetsuh Frank, RA, LEED AP, of Beyer Blinder Belle Architects & Planners LLP, explained that the Seminary is planning to build a “field” of 22 standing column wells installed beneath the sidewalks surrounding the campus. These wells will take advantage of Manhattan’s geology by tapping the ground water that flows through the seams and fractures of the island’s bedrock. A steel casing runs from the surface down to the bedrock. From there, an unlined borehole, eight inches in diameter, is drilled to a depth of 1,500 feet. Ground water, which maintains a temperature of about 55 degrees Fahrenheit year-round, is pumped out of the bore hole into a cellar mechanical room, where a heat-pump system either transfers heat to it during the warm months or pulls heat from it in cold weather. The water is then returned to the standing wells, where it loses any acquired heat to the ground water and to the cold stone bore holes. Any need for roof-level cooling towers will be permanently eliminated, helping to preserve the architectural integrity of the campus-an entire city block of landmarked Gothic Revival buildings. The Seminary’s system will provide 850 tons of cooling to 260,000 square feet of buildings. Beyer Blinder Belle estimates this will create the single largest geothermal well field in the New York City area. Not only is it expected that construction costs will be offset in nine years so that from the tenth year forward, the Seminary will gain a net savings in its operating budget, but the Seminary will reduce its carbon dioxide emissions by more than 1,400 tons a year. “We are investing in this geothermal system to benefit the Seminary, our neighbors, and our world for generations to come,” commented the Very Rev. Ward B. Ewing, Dean and President. “This project ensures that a campus built for the ages will continue to serve through the ages. And it reminds us that we must work as hard to preserve the environment as we do to save our Seminary’s historic buildings.” Years in the planning stages, construction on the project begins in the wake of the Episcopal Church’s General Convention, which passed significant “green” legislation encouraging the church at every level to reduce “energy use through conservation and increased efficiency, and by replacing consumption of fossil fuels with energy from renewable resources” toward the reduction of global warming. “The Seminary’s geothermal initiative is an integral part of our overall plan of improving the physical fabric of our campus while reducing operating costs,” said Maureen Burnley, Executive Vice President for Finance and Operations. “We believe GTS is helping to lead the way in the use of renewable energy sources.”