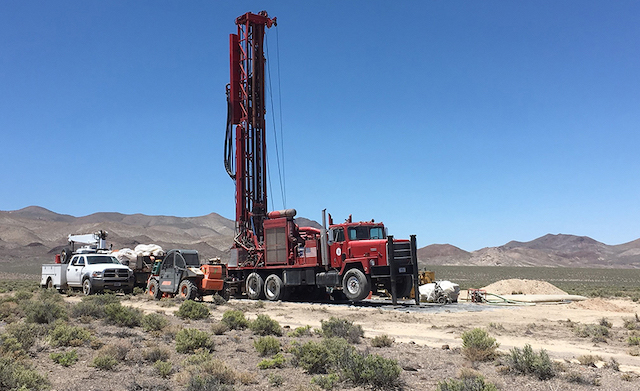 This week the University of Nevada, Reno announced two discoveries in the Great Basin by the Nevada Bureau of Mines and Geology using a previously untried method for finding unknown, hidden geothermal resources.

Both discovered systems are blind – meaning there are no surface indications of hot water – and there had been no exploration previously in one of these areas and only minor previous exploration in the other. Geologists at the Nevada Bureau of Mines and Geology at the University of Nevada, Reno, used a number of other surface and subsurface clues in their methodology developed as part of their Department of Energy funded Play Fairway project that has been underway since 2014.

“The exploration, the mapping, the analysis, all led us to the top two spots – of perhaps hundreds of potential sites – to drill geothermal wells,” Jim Faulds, director of the Nevada Bureau of Mines and Geology, said. “Success at two sites provides an initial validation of the methodology we developed and opens up new possibilities for power generation sites by the industry.”

The third and final phase of the project involved temperature-gradient drilling to approximately 500-foot depths. Data from all three phases of the project has been analyzed and will help guide industry to the most favorable sites to generate renewable energy in the large study area, which covers about one-third of the state of Nevada, said the scientists.

Now that these blind geothermal systems have been discovered and the wells capped, it’s up to the geothermal industry to conduct additional drilling for possible development of a geothermal power plant.

“It’s gratifying to demonstrate positive results of applied science here at the Bureau,” Faulds said. “After several years of research, mapping and analysis, we’ve identified many promising areas that have great potential for geothermal power. Funds only allowed for test drilling at two sites, but there are dozens of other promising sites that I’m excited about across the region. The two sites, one in southeastern Gabbs Valley and the other in at northern Granite Springs Valley, are now ready for industry to decide on their economic viability.”

McGinniss Hills, currently the largest geothermal system in Nevada northeast of Austin, has the capacity to produce about 140 MW of electrical power and is also a hidden geothermal system with no surface hot springs or steam vents. The newly discovered system in southeastern Gabbs Valley system is probably not as large as McGinniss Hills, but Faulds thinks that it is likely that many other systems as large as McGinniss are yet to be discovered.

“There is potential in the Great Basin for much greater amounts of geothermal energy than the current 720 MW of capacity from about 25 power plants already in place,” Faulds said. “The geothermal wealth of this region can be attributed to its active faulting and thinning of the crust, which allows hot fluids to rise more quickly to levels accessible through drilling. The Play Fairway project provides a catalyst for accelerating geothermal development in the region.

“The industry is now looking at Gabbs. It’s not our job to develop the resource, but rather to assess geothermal resources and identify the systems, so industry can take over and develop energy for Nevada and neighboring states.”

Much of the Gabbs Valley project was carried out by Jason Craig for his master’s thesis. This project was a great collaborative effort, Faulds said, between several NBMG faculty and graduate students at the University, as well as several other organizations, such as the U.S. Geological Survey.

This project was funded by a Department of Energy grant through their Geothermal Technologies Office. Collaborations with the geothermal industry, including Ormat, Nevada Inc. and U.S. Geothermal were also beneficial to this study.