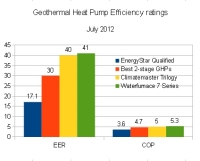 I looked at the technology behind these new heat pumps in the article Geothermal Heat Pumps: The Next Generation in May, soon after Climatemaster introduced the Trilogy.  At the time, we only knew that Waterfurnace expected the 7 Series to be “more efficient” than the Trilogy.   Now we have detailed specs, I thought I’d compare them head-to-head: 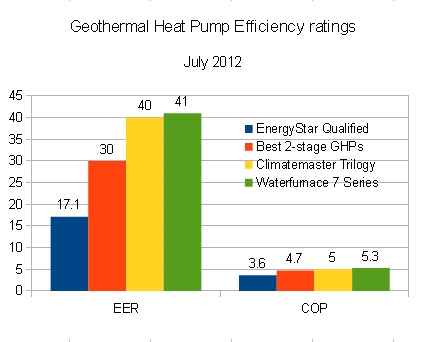 As you can see from the chart above, Waterfurnace managed to nudge out Climatemaster in both cooling (EER) and heating (COP) efficiency ratings.  Both are on linear scales, so the Series 7 is 2.5% more efficient at cooling and 6 percent more efficient for heating than the Trilogy.  With top efficiency ratings, the Waterfurnace GHP will likely appeal to customers who must have “the best” of everything.

The efficiency of  the GHP unit is only one factor in overall system efficiency, and efficiency is only one factor in the decision of what to install.  Price will be an important factor as well, although given the likelihood that these variable speed GHPs will be priced at a significant premium, price sensitive customers will most likely install two-stage GHPs.  Waterfurnace’s Series 5 was launched in March, at a slightly lower price than the previous Envison product it replaced, while maintaining all the features and efficiency of that model.

The most important factor for installers will be dealer support and ease of install, especially for the residential market.  Both Climatemaster and Waterfurnace seem to have simplified installation with the new models, while dealer support is much more a local issue, and is determined by the installer’s relationship with their distributor.

Along with the Series 7, Waterfurnace is introducing  a new “IntelliZone2″ zone controller, which will simplify the installation and use of their Series 5 and 7 products with multiple zones.  On the other hand, Climatemaster’s Trilogy includes a propriatary “Q-mode” which allows the heat pump to create hot water year round.  Most rival heat pumps only create hot water when being used to heat or cool the building.  In new residential applications without an existing water heater, Q-mode could easily give Trilogy the edge over the 7  Series, since it would allow the contractor to dispense with a secondary hot water source.

Neither of these two GHPs is the clear winner, with the 7 Series’ edge in efficiency countered by the year-round hot water of the Trilogy’s Q-Mode.  Waterfurnace’s efficiency edge is more significant in heating-dominated climates, such as the Northern US and Canada, while Climatemaster’s Q-Mode will probably give the Trilogy an edge in new-build markets.  Existing relationships between installers and their dritributers will probably dominate both in many cases.  UPDATE: The Series 7′s earlier commercial availability will make Waterfurnace’s offering the only real choice for installations over the next few months.

The biggest winners will be consumers, who now have both cheaper versions of two-stage GHP technology available, as well as the option to enter a whole new frontier of HVAC energy efficiency.

UPDATE: I just looked into the 7 Series vs the Trilogy 40 in more detail here and came to a slightly different conclusion.

This article was first published on the author’s Forbes.com blog, Green Stocks and AltEnergy Stocks and was republished with permission.